This is a wonderful dish.  Especially if you are looking for plant-based recipes that pack a lot of flavor. And this rendition of what is basically a warm lemony pasta salad can be made as spicy as you like. Or, using a cautious hand with the red pepper flakes, you can tone it down. You can serve this dish straight from the stove but it also holds up well at room temperature. If you can’t find ditalini, the recipe says you can substitute any small tubular pasta. And what are the substitutes?  Ditaloni, Tubettini, or Risoni, according to my sources. (Although if you can’t Ditalini, I am not sure how easy these are to find either.) The easiest substitute to find is good old Macaroni as small as they come.

We even learned a new technique.  This dish is “cold-fried”.

The green beans, which are blanched for all of 5 minutes, join a handful of aromatic herbs of your choice and start the cooking process in cool olive oil. They come to a sizzle and brown up as the heat increases.  What’s wonderful about this is that it’s a splatter-proof way of cooking them as opposed to dropping them into hot oil in a skillet. A word about the anchovies. I realize this is a taboo ingredient for many. But it shouldn’t be. Once these tiny fishes “dissolve”, they really salty flavoring and not those dried-out specimens atop a bad Caesar Salad.

A word about this recipe’s creator

This recipe first appeared last month in Bon Appetit. Its creator is named Shilpa Uskokovic. Now a Bon Appetit Food Editor, Shilpa is a veteran of any number of Michelin-starred New York Restaurants—Perry St., Jean-Georges, Marea, and The NoMad. She has a degree in Economics but her passion for food found her graduating from the Culinary Institute of America. She was born and raised in Chennai, India. Formerly called Madras, Chennai is one of the most fascinating culinary regions of India. It is home to an incredible variety of cuisines both vegetarian and non-vegetarian. It even has its own culinary definition: South Indian food blends all six different tastes—sweet, salty, sour, bitter, pungent, and astringent. Ms. Shilpa’s last name, Uskokovic, is that of her husband Miro whom she met at the Culinary Institute. Here’s the recipe and after it, some other ‘small pasta’ dishes.

A warm lemony vegetarian pasta that you can make as spicy as you like. Tortellini Soup with Spinach, Onions, Carrots and Fennel and how it ended up on our table. Stanley Tucci’s 6-part series for CNN is an Italophile’s dream. For one hour a week, its viewers are immersed in the food of a single region of Italy.  For lovers of the Italian language, there’s a surprising amount of it spoken here. Subtitles are provided […] 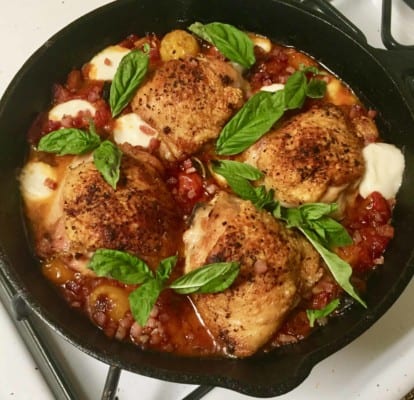