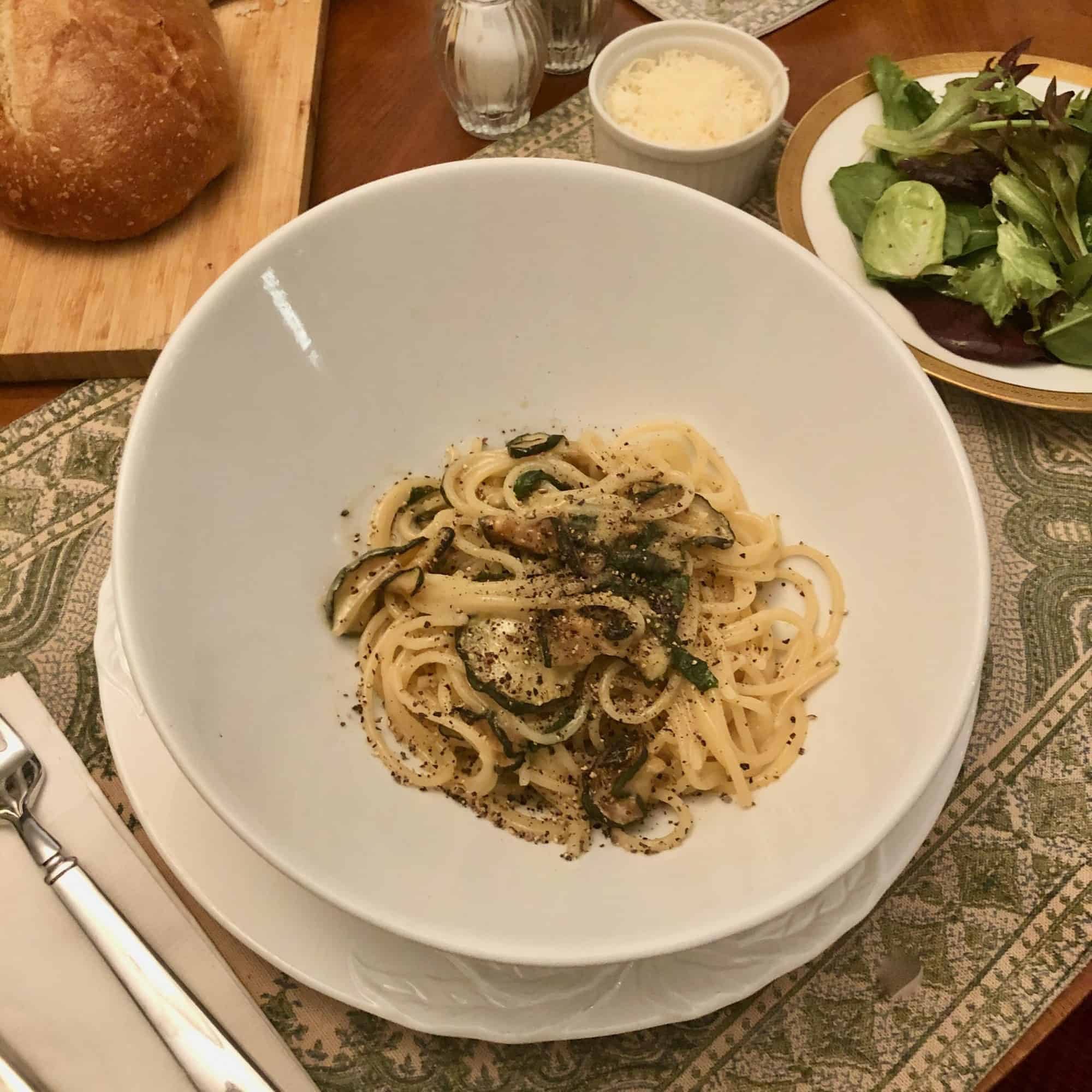 Stanley Tucci’s 6-part series for CNN is an Italophile’s dream.

For one hour a week, its viewers are immersed in the food of a single region of Italy.  For lovers of the Italian language, there’s a surprising amount of it spoken here. Subtitles are provided in English.  Last week, the series was picked up for another season. Wonderful news because the goal of the series is to cover all 20 regions of the country.

Tucci started his food odyssey in Naples before heading to Amalfi where today’s dish was invented.

Spaghetti alla Nerano is a celebrated dish named after the beach town where it was invented. It is pasta and zucchini gastronomically elevated with elements of Cacio e Pepe.  A great zesty dish, it relies on provolone to bring an otherwise bland vegetable to life. Topped with basil it even smells wonderful.  And I have to add that it’s incredibly economical. The most expensive thing on the plate is the Provolone.  But on the way to the recipe, I encountered a surprising amount of confusion for something this simple. Odd because unlike so many famous recipes, Spaghetti alla Nerano’s invention can be traced to one woman and one restaurant.

At her eponymous restaurant, founded by her mother in 1901, Maria’s precise recipe remains a well-guarded secret.  Having convinced the Chef, grandson of its inventor, to cook the dish on camera, Tucci quickly uncovers the addition of Butter. But that was not all.  I was so keen on the dish, I re-watched the segment several times.   Then I went to find the recipe. It never approximated what I had seen. I bypassed English language recipes and searched in Italian. Not even “La Cucina Italiana”, my go-to on Italian cooking, got it right. In fact, they expressly ruled out using ‘nut oils’ in lieu of E.V.O.   Chef Lello used Sunflower Oil.  My recipe is what I divined from Stanley’s visit to Maria Grazia. With one major exception.  Chef Lello fries his Zucchini and lets it sit overnight, using it the next day.  This I dutifully did.  I could not understand what that achieved.  So the recipe is put together all at once.  And it’s simply wonderful. When the pasta is al dente, drain it, but not completely. The pasta water is as essential as the butter in making the sauce creamy. Add the fried zucchini rounds and then the pasta to the skillet and a ladleful of pasta water. Mix everything together vigorously for a minute or two. (The zucchini rounds are bound to break up, but that’s normal.) Then add the grated cheese and some more basil leaves and continue mixing until the cheese has completed melted into a creamy sauce, adding more pasta water if needed.

The Cheese is essential to the dish. Choose wisely.

A great number of recipes use Provolone di Monaco. “Monk’s Provolone” is a local cheese from the Sorrento peninsula. It’s incredibly expensive in this country.  A substitute is Caciocavallo at half the price. Another is Provolone. Provolone is made by hanging up the cheese to age. The longer the cheese is aged, the harder it becomes and the sharper its flavor.  So if budget is an issue, Provolone Piccante is a great choice.  But if all else fails, a mixture of 70 % Pecorino and 30 % Parmigiano will approximate the salty, tangy, spiciness of the genuine article. Here, at last, is the recipe, followed by some other favorite pasta dishes. Maria Grazia Ristorante is located at Marina del Cantone, 80061, Nerano, Campania, Italy. There a serving of Spaghetti alla Nerano will set you back 18 Euros.

A simply wonderful dish created with so few ingredients, the secret is really in the quality of those ingredients and the technique used to make the creamy sauce that covers every strand of spaghetti. 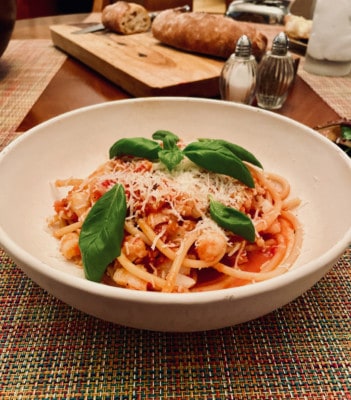 Our first Stanley Tucci Recipe of the Season: Bucatini alla Calabrese Stanley Tucci’s “Searching for Italy” is back and it’s as irresistible as ever.  The season opener found Stanley and his parents in their native Calabria.  The toe on “the boot”, both Stanley’s maternal and […] We may be late for Meatless Monday but we’d make this any day of the week This is a wonderful dish.  Especially if you are looking for plant-based recipes that pack a lot of flavor. And this rendition of what is basically a warm lemony […]