I am sucker for about three things that are going on in this particular recipe. I am a fan of Italian sausage, cream sauces and pasta.  Throw a little basil on it for color and I found it irresistible.  And for these early Fall nights it’s just about perfect—especially served with a last-of-summer’s tomato salad.   But I had to wonder why was an English chef messing about with pasta.  I suppose I could say the same thing about myself but never mind. And who exactly was Nigel Slater, its creator and a ‘name’ for sure but why?

Well, I went down the rabbit’s hole on this one. I discovered a whole lot more than a delightful 30-minute 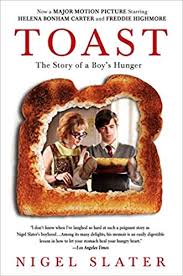 pasta supper.  I discovered a food writer and broadcaster who has been at for decades now, the author and art director of no less than 17 cookbooks, the winner of 17 awards and a man whose incredibly sad early life was the subject of a full-length movie ‘Toast: The Story of a Boy’s Hunger’ (BBC Films) starring no less than Helena Bonham Carter. You can find it on Netflix and if you’re a fan of weepies, get out your handkerchief.

Nigel Slater was born in England’s West Midlands in the town of Wolverhampton to a factory owner named Tony and his wife Kathleen. Tony, of movie fame at least, was quite a lout of a man.  Kathleen was a stay-at-home mom and portrayed as one lacking in any culinary skills whatsoever. She was famous for burning things, and like many mothers in the 1960s (including my own) never served a fresh vegetable.  Everything came directly from cans–up to and including ham. Many family meals ended with the food being jettisoned the minute it came to the table and toast being offered up as its replacement, hence the title of the movie and the autobiography that inspired it. Tragically, Slater’s mother, Kathleen, died of asthma when Nigel was just 9.  Almost immediately his father hired a house cleaner who is called Joan Potter in the movie.  This may have been to prevent a libel suit from the family of the woman, Dorothy Perrens, Tony had actually married.  “Joan” is savaged in the movie.  There’s the British undercurrent of class, which Joan severely lacked. But mostly she’s presented as a truly loathsome woman who did everything she could to thwart Nigel’s culinary interest from the day she arrived on the scene.  There was one particularly riveting chapter in the movie when Joan absolutely refused to part with her recipe for Lemon Meringue Pie. Since it was Tony’s favorite and since Nigel wanted desperately to please his father, Slater snuck around whenever Joan made it. He wrote: “I’d count the egg-shells in the bin, to see how many eggs she’d used and write them down. I’d come in at different times, when I knew she was making it. I’d just catch her when she was doing some meringue, building up that recipe slowly over a matter of months, if not years.’

He did finally succeed causing Joan to throw his version onto the floor in a typical show of pique. Slater’s father died three years after his mother had. He immediately left home, never spoke to “Mrs. Potter” again in his life.

There was one other scene in the movie that struck home. In one of the earliest scenes, Nigel has convinced his mother to make Spaghetti Bolognese for dinner.  The sauce came in a can, the parmesan cheese was in that familiar shaker from childhood and the spaghetti was particularly unwieldy.  Tony was completely thrown by this wildly foreign meal.  He could not handle the spaghetti and the whole dinner went in the trash to be replaced by, what else, Toast.

Nigel Slater’s Pasta with Sausage, Basil and Mustard recipe is one you may want to experiment with to see how much cream sauce you want.  Also, you can be flexible with the grainy mustard. I actually cut down the number of sausages to make two portions instead of four.  I chose to use Mezze Rigatoni for the pasta but you can use the recommended penne or shells. But don’t limit yourself if you want to use Gemelli or even Orecchiete. Finally, I liked the look of the basil leaves so rather than slicing them, I left them whole.  Here it is:

Pasta with Sausage, Basil and Mustard from Nigel Slater

A wonderful take on a pasta sauce filled with flavor and the tang of whole grain mustard. A great weeknight dinner Rome’s favorite and most famous pasta dish gets a major makeover. When I lived in Rome, I can’t count how often I would order this dish. At least once a week, I would sit down to a bowl of this pasta.  Just four ingredients made […]

5 thoughts on “Food and Wine’s Best Recipe of 2002: Pasta with Sausage Basil and Mustard from Nigel Slater”