Confession time. For some reason, I associate French food with cooler temperatures. Give me Oxtail Bourguignon in October, my first bowl of Onion Soup at first frost.  But I’ve been raring to cook with “Dinner in French” (Clarkson Potter 2020) beyond the Asparagus tart I posted in June.  This is a great summer-y recipe. It comes together quickly and easily. It’s lovely and light.  Hints of citrus, the sweetness of our own Cherry Tomatoes are a great counterpoint to the richness of the crab. But one thing did puzzle me. Aside from the faint licorice taste of Chervil, what makes this dish French? Especially when Clark herself allows the substitutes Basil, Mint, or Cilantro for the hard-to-find Chervil.

Bill Buford’s “Dirt” may answer the question: Is this dish French or Italian? The first book I read this summer was Bill Buford’s best-seller “Dirt” (Alfred A. Knopf 2020). Buford has had a long literary career including being the Fiction Editor for The New Yorker Magazine.  He also has a culinary history. His first book “Heat” (Alfred A. Knopf 2006) centered on his sabbatical in Italy in which he trailed Mario Batali and worked at a Tuscan Butcher. “Dirt” chronicles his 8-year stint in Lyon, the citadel of French cuisine. It’s a raucous behind-the-scenes look at the underside of grand French restaurant cooking and it’s a brilliant book. But what does it have to do with Clark’s Buttery Crab Pasta?

There’s an on-going discussion in “Dirt” as to whether the roots of French cuisine are actually deep inside Italy.

Catherine de’ Medici is often credited with having brought Italian food to the French court when she became its queen. Buford debunks this myth in a flash. A 14-year old princess could hardly have started a culinary movement. Instead, Buford builds a solid case for a French passion for all things Italian Renaissance, including its princesses.  Lyon, when Catherine arrived in 1548, had been home to a colony of Italians for almost 100 years. Even Leonardo Da Vinci was summoned to France by its king, Catherine’s father-in-law. Da Vinci designed a new castle at Romorantin in the Loire Valley in 1516. The great artist died in the King’s arms in 1519 and was buried there too. The connection to Italy is not just to its food but to its culture. Ms. Clark comes by her pasta dish honorably. Although it was a bit of a shock to discover that France doesn’t even come into the top 11 Pasta-eating countries. It is however # 12. (In case you wonder…the list goes like this: Italy, Venezuela, Tunisia, Greece, Switzerland, Sweden, United States, Iran, Chile, Peru, and Germany.) Here is the recipe:

A lovely light summer pasta filled with Crab and Cherry Tomatoes, it comes together in under 30 minutes. Some other Melissa Clark Recipes to try: 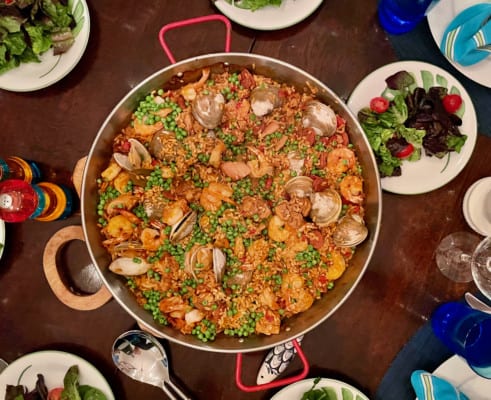 I fell in love with this recipe in a heartbeat. It just looked so fresh, so complex and yet so simple to make. It’s the invention of Molly Baz who is a Senior Associate Food Editor at Bon Appetit.  She took her farmer’s market finds […]