Fish Chowder from Sam Sifton in The New York Times A No Recipe Recipe yields a Chowder so good, I had to share the recipe I made with it.

Once a week, Sam Sifton of the New York Times publishes what he calls a “No Recipe Recipe”. There is no set of ingredients or steps in making the dish.  It’s an invitation to improvise in the kitchen, to use what’s on hand. It’s not quite as loosey-goosey as it sounds.  The No Recipe does contain some instructions. What temperature the stove should be, when to season it, and what to season it with are included.  There are even substitutions for missing ingredients – in this case, fish stock–and towards the end the timing of the most essential ingredient, the fish itself.  I can’t begin to tell you how wonderful this dish was. It was creamy-rich, brimming with flavor, combining the earthy goodness of root vegetables, sweet corn, and the undeniable brininess of the sea and saltwater.  It was so good, that I was very glad that I had actually written done how I approached the dish and what I used to make it—the quantities, the cooking times—I’ve incorporated them into the final recipe.

Where Chowder originated may surprise you.

Certainly in the United States, New England is heralded as the center of chowder-making.  In Boston, a recipe for Chowder was published years before the nation’s first cookbook ever appeared. On September 23, 1751, the first and oldest-known fish chowder “receipt” was published in the Boston Evening Post. Chowder became a mainstay in the Northeastern states. Along with fish, Chowder makers began adding clams and shellfish. They were easy to find and could be simply dug up from the shore.  As the country moved westward to the Pacific Ocean, the fishermen followed and recipes for chowder came with them. But Americans were late to the party. The earliest arrivals to our shores didn’t share Native Americans’ passion for fish-eating. It took the Pilgrims a long time before Clams were acceptable. On record is that in the 1620s the Pilgrims fed clams and mussels to their hogs explaining that the two were ‘the meanest of God’s blessings. The Origin of Chowder is both French and English and pretty well universal.

The root of the word Chowder is from the Latin word calderia which was a place for warming things and later came to mean cooking pot. In France, the pot became a chaudiere and in English a cauldron. A simple dish of vegetables or fish stewed in a cauldron became a ‘Chowder”.  The Oxford English Dictionary traces the word Chowder to the fishing villages on both sides of the English Channel. In France’s Brittany and England’s Cornwall when ships returned from the sea, every village had a large Chaudiere waiting for a portion of each fishing boat’s catch, to be served to the villagers at Celebrations for the safe return of the vessels. If truth be told, there isn’t a sea-bound country on earth that doesn’t have a variation of fish stew that is a close or distant cousin of Chowder.  Here is the recipe for the one we made.

Fish Chowder from Sam Sifton of The New York Times

A creamy-rich taste of the sea in every bite of this American classic. 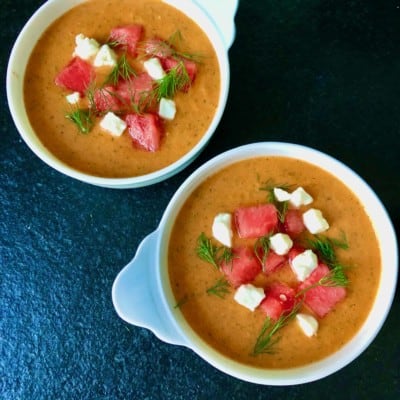 Hats off to Tyler Florence for the inspiration for this recipe. I can’t really claim that I followed Tyler’s recipe. But the basics are his.  It can be made entirely without turning on the stove…with one caveat*.  Everything goes into the blender in easy steps […] We love Chowder and this is a great one. Chowder is very basic and cooked simply. Today’s recipe consists of the basic elements of potatoes and onions, pork, milk, and cream.  It follows the recipe that has made New England famous for its chowders. But […]