How much dry pasta makes a great bowl of pasta and sauce?

We love a great bowl of pasta. It’s one of our most favorite comfort foods, especially on a cold winter night. I am particularly fond of Orecchiette, the little “ears” — the exact translation from Italian. This pasta is like a little bowl itself. It holds the ingredients to whatever sauce it’s paired with.  The one caveat I have with cooking pasta is that I think the ratio of sauce to pasta should tilt heavily in the direction of the sauce. I believe that one cup of dried pasta per serving is ideal. In the case of spaghetti, linguine or any long pasta, 1/8 of a 16-oz. box is a gracious plenty.

The Crowing Glory on this bowl of pasta is a cheese that’s taken the East Coast by storm.

Today’s recipe is very simple to pull off. Boil the pasta. Brown the sausage. Add the jarred red peppers and the spinach. Pick up the flavor with the red chili pepper flakes.   Finish the whole thing off with white wine, butter, and parmesan. But the crowning joy of this particular bowl of pasta is unquestionably the luscious creamy-rich boule of Burrata fresh Mozzarella that’s been broken over the bowl of pasta. It’s a wonderful contrast to the solidity of the sauce and pasta.  It cools down the red chili pepper while amping up the richness of the dish. I am very fond of the Burrata found at Trader Joe’s.  It has the requisite milkiness of artisanal Burrata but for much less money.  The only caveat is that it should be eaten within a couple of days from purchase. Beyond that, it risks becoming tough on the outside and less creamy inside. What exactly is Burrata, which seems to have taken my part of the country by storm?

Everything you ever wanted to know about Burrata. Burrata is a fresh Italian cow’s milk cheese (occasionally made from water buffalo milk). It is actually a fairly recent invention.  It may have its o rigins on a single farm in Apulia in southern Italy.  To be precise: Bianchini’s Farm in Andria. In the 1950s, Lorenzo Bianchini developed Burrata.  The cheese starts out like mozzarella where rennet is used to curdle warm milk. But then the curds of fresh mozzarella are plunged into hot whey, kneaded and then shaped into balls. While still hot, they are formed into pouches which are then filled with leftover mozzarella, topped with fresh cream and closed.  Traditionally, Burrata was wrapped in the leaves of the Asphodel plant which conveniently brown on the same schedule as Burrata ages, three or four days. Fresh leave meant fresh cheese. Dried out ones signaled Burrata was past its prime. You won’t find any asphodel leaves on Trader’s Joe’s Burrata so keep an eye on the use-by date.

Here’s today’s recipe and after it some other pasta recipes to try…including one that takes you to Amalfi.

A warming bowl of Pasta filled with Sausage, Peppers, and Baby Spinach is topped with creamy-rich Burrata for a quick and satisfying meal. I am back from Europe with a perfect dish for a summer night: Hot Pasta with a Cold Tomato Sauce 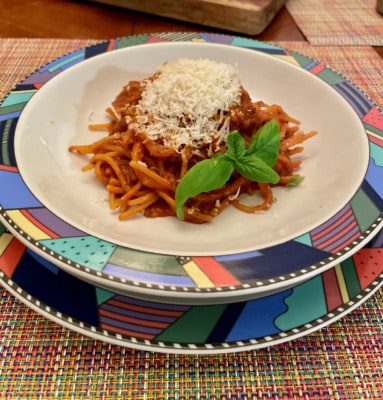 Crispy, spicy, and deeply tomato-ey flavor from a whole new technique for cooking Spaghetti. Our lead visual may look like an ordinary bowl of spaghetti but it is most certainly not. This is spaghetti cooked in an entirely different way. In Italian, it’s called the […]

2 thoughts on “Orecchiette with Sausage, Peppers, Baby Spinach and Burrata”