This recipe landed in my inbox in a collection of the 10 Most-Popular recipes in The New York Times. Turns out the Times runs posts of its Most Popular recipes so frequently, that I cannot tell you what time frame they’re referring to.  However, the recipe was first published right after Thanksgiving this year.  Since I have resolved to cook with more plant protein and less animal protein, I was really excited to see it.  I’ve had huge success with a Chickpea recipe in the past so I was drawn to this one. (There’s a link to that recipe after this one. Do check it out)  I cooked it and we loved it. Chickpeas are added to a spicy mix of garlic, lots of ginger and yellow onion. They crisp away on the stove sizzling along in the pan.  When they’re cooked, you put a cup of the chickpeas aside to top the finished stew.  Red Chili Pepper and Turmeric go in with coconut milk and stock added after you’ve crushed the chickpeas to thicken the stew.  It bubbles away, a lot longer than the recipe indicated.  The final ingredient—a choice of greens—is added, the stew is ladled out, topped with the reserved chickpeas, mint and a dollop of yogurt. I actually topped mine with Ricotta since we had no plain yogurt in the house.   It’s sublime! But little did I know what wild controversy there is surrounding this wonderful dish.

I always like to put recipes in context. So I circled back to the New York Times and discovered a lot more than I bargained for.  Alison Roman had written an introduction to her recipe which seemed fairly innocuous to me. It was titled “Creamy Hearty and (Sort of) Virtuous.”  In it, she made a case for not labeling recipes. In her example she wrote “Call it vegetarian and I will convince myself that whatever it is would have been better with sausage in it”.  Ms. Roman went on to say that this almost vegetarian recipe (you can use chicken stock in it) is ‘a hearty, creamy, heavily spiced stew that just happens to be free of meat or dairy and full of protein and leafy greens.” She wouldn’t label the stew vegetarian because it might turn off omnivores. Sounds reasonable to me.

Well, the readers of The New York Times were having none of that.  Bang at the top of the Comments was a woman who ridiculed the dish pointing out the fat content of coconut milk.  She claimed she’d done ‘some quick nutritional calculations’ and the dish has more saturated fat (32 grams) than a woman should eat in a day ‘making this a decidedly UNhealthy recipe’. So much for any “(Sort of) Virtuous” label for this reader.  But “Suzy” of New York was the tip of the iceberg.  “Why on earth is Roman apologizing for offering a vegetarian recipe and why is she refusing the label it as such. Afraid of annoying her Republican in-laws or something?”  (I had no clue Republicans were anti-vegetarian, did you?)  From there, the comments descended into rather predictable Times talk about saving the planet.  Good lord it’s a stew. And a darned good one.  And here is the recipe:

A luscious creamy-rich stew spiked with spice and coconut flavor through and through. A glorious dish on a cold night. 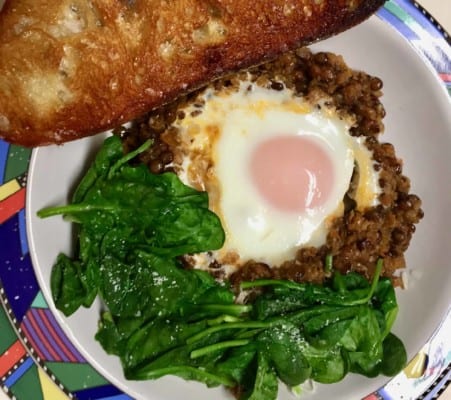 This classic stroganoff is as meaty and rich as the original. You’ll find many recipes on Chewing The Fat that are centered on Mushrooms. They’re the centerpiece of three of our most popular posts. There’s probably no easier to go meatless and these little miracles […]