One Skillet Chicken Thighs, Potatoes and Summer Vegetables with a Shallot Vinaigrette. We are huge fans of the Chicken Thigh

No other part of the chicken can match the ease with which you can cook this most flavorful part of the bird.  Here in this single skillet dinner, it truly shines.  Perfect for two, it uses the chicken fat to coat baby Yukon Gold Potatoes. The chicken itself is perfectly crisp. And to make it a balanced meal it pairs the protein with the starch of potatoes and then it’s crowned with green vegetables.  I have made this elegant-looking dish with Asparagus and Peas. But on its second outing, the Asparagus was past its prime. Instead, I upped the quantity of frozen peas and loved it for its looks alone.  The simple Shallot Vinaigrette tops the dish with a vibrant sauce that’s a snap to make too.  But why the frozen peas and not fresh?

So wrote a woman named Nayan Gowda on one of my favorite Food Pages. “Culinary Travel” is the brainchild of Jonell Galloway, a Kentucky native who long since left her native state for Europe. There she leads a peripatetic life. She bounces between Chartres, France, Italy, and Switzerland. When I first discovered her page, she was anchored in Venice for the winter. Lately, she has wintered in Lucca, one of my favorite Italian cities. Hers is an ex-pat’s dream life.  You can find her pages on Facebook https://www.facebook.com/groups/114625085413936  Join and you’re in for a treat. But back to Nayan Gowda and those frozen peas…

“How did (peas) become a staple of the freezer drawer?”

Nayan Gowda writes: “Unless you have the joy of a garden and the ability to eat peas right off the vine, fresh peas take so long to reach grocery store displays that enzymes break down their sugars into starch, turning them mealy. Frozen peas, which are frozen within hours of being picked, keep their sweetness and crispness, not to mention their bright colour. “ Freezing had long been used in Northern climates as a way of preserving food. American Clarence Birdseye became interested in food-freezing during fur-trapped expeditions to Labrador, on Canada’s far east coast, in 1912 and 1916.  In 1929, he introduced ‘flash freezing’ to the American public. Frozen peas quickly became one of his most popular frozen vegetables.  Birdseye discovered that peas quickly blanched before being frozen kept their vivid green color. Here’s today’s recipe followed by some other ways to use frozen peas.

One Skillet Chicken Thighs, Potatoes and Spring Vegetables with a Shallot Vinaigrette.

Crispy Chicken Thighs are paired with Baby Yukon Gold Potatoes and Spring Vegetables. Then the dish is topped with Shallot Vinaigrette for a one-skillet dinner that's perfect for two. Springtime in a Bowl: Orecchiette with Sausage, Peas, Mint and Burrata 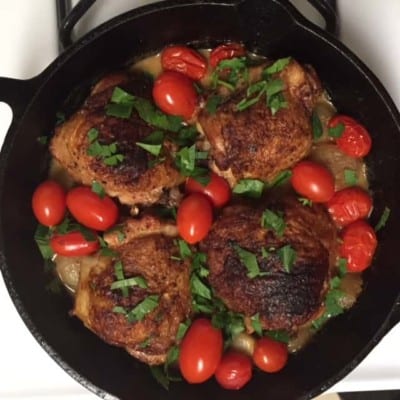 2 thoughts on “One Skillet Chicken Thighs, Potatoes and Summer Vegetables with a Shallot Vinaigrette.”