I started out with a recipe for this dish from Florence Fabricant of the New York Times.  Ms. Fabricant, whom I have had the pleasure of meeting, is a food and wine writer who contributes to the Times weekly with her columns “Front Burner” and “Off the Menu”.  She also partners with Eric Asimov on his monthly wine reviews.  And that’s where I saw her recipe.  It was first published in 1988 but was recently revived and for good reason. It is a lushly flavored combination of beautiful green vegetables and pink smoked salmon in a shallot-scented cream sauce.  And it is incredibly easy to make in all of about 20 minutes.  The cooking time is greatly helped by the use of fresh spinach fettucine noodles which cook in all of 3 minutes.  The first time I made it, I followed the ingredient list to a T.  The result was excellent. But I couldn’t help thinking how I could incorporate two elements that I believe brought the dish to another level.
Like a lot of great recipes, there was a trace of the ‘happy accident’ school of cooking.  In this case, my supermarket only had Organic Asparagus, which, in addition to being much pricier than the non-Organic variety was packaged with far fewer spears.  So I went to my go-to: Frozen peas.  They rounded up the volume of vegetables, adding sweetness and color to this already gorgeously green dish.  The second thing I changed was a result of my seeing an Alaskan Smoked Salmon at Trader Joe’s.  I knew from having visited the state that Alaskan Smoked Salmon has nothing to do with East Coast ‘lox’.  They are entirely different. Alaskan Smoked Salmon is cured or brined and then hot smoked.  Lox, or “Nova” on the other hand is cured but not smoked.  Trader Joe’s had an added appeal in that it was seasoned with cracked peppercorns, mustard seed and lemon.  So instead of the silkiness of the original recipe, the Trader Joe’s Smoked salmon added just the right amount of smoky flavor.  This is one great weeknight dish.  Serve it with a green salad and you’re in and out the kitchen in no time.  Here is the recipe:
Recipe for Fettucine with Asparagus, Peas and Alaska Smoked Salmon adapted from Florence Fabricant in the New York Times
Serves 2. Takes under 30 minutes to make 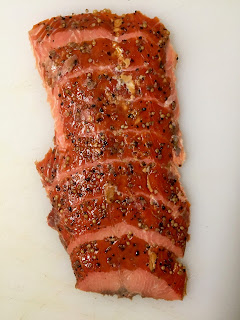 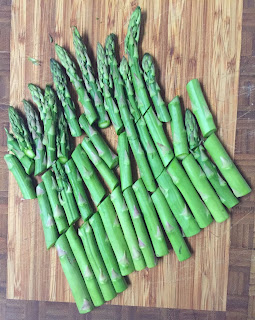 1. Snap off the ends of the asparagus where they break naturally and peel the stalks. Cut the asparagus on a slant to pieces about an inch long. 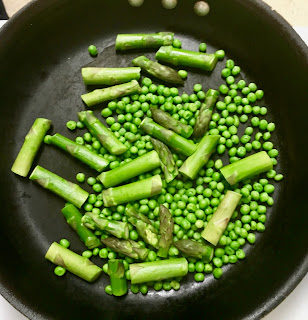 2. Add the asparagus and the frozen peas to a pan of rapidly boiling water. Cook the asparagus and peas until they are just barely tender and still bright green, about three minutes. Rinse under cold water, drain well on paper towels and set aside.
Bring a large pot of salted water to a boil for the pasta. 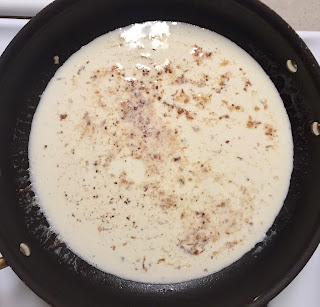 3. While the water is coming to a boil, melt the butter in a large heavy skillet. Add the shallots and saute until soft but not brown. Stir in the cream and simmer about five minutes, until the cream has thickened somewhat. 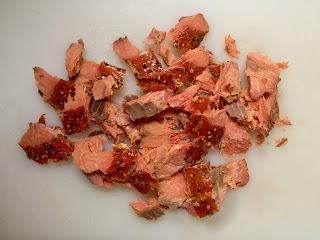 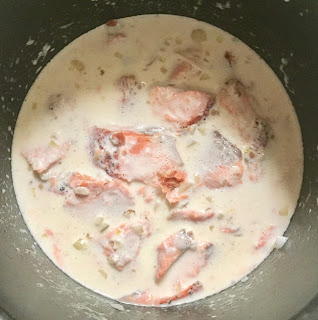 5. Add salmon pieces to the cream and remove the skillet from the heat. Season with pepper and lemon juice.
Add the asparagus and peas.
When the pot of water is boiling, add the fettuccine, stir it once or twice, then cook two to three minutes after the water has returned to a boil. Drain well. 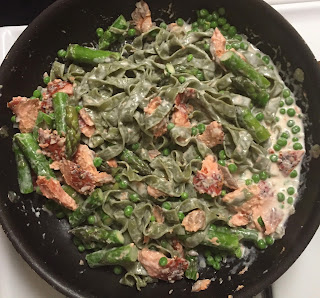