I love “Milanese”, which is basically what this recipe is.  Veal Milanese is its much more expensive cousin.  In Argentina, where it’s wildly popular, it’s called simply “Milanesa” and it’s made with Beef.  In neighboring Chile it’s called Escalopa.  In Mexico, it’s back to being a Milanesa but there, it’s most often a sandwich filler with lettuce, tomato and mayonnaise. In Panama, Milanesa is served with a spritz of lime juice and hot sauce and it can be thinly sliced beef or chicken.  And in the Phillipines it’s called Carna Frita and seldom appears on restaurant menus but is dearly loved by home cooks. Here the technique is pure Milanese: a Bone-In Pork Chop is pounded thin, coated in Flour and Fennel Powder, dunked in egg and finally coated with crisp Japanese Panko breadcrumbs.   The fennel flavor is further enhanced by a thin-sliced fennel bulb, red onion and a Gala Apple, all of which are sautéed and plated with the Pork Chop.  You have a crispy juicy piece of meat with an undercurrent of fennel that carries through to the tender fennel salad.

Though it is named for Milano, in Lombardy, there’s a dispute about where it was invented.  It bears a striking resemblance to Austrian Schnitzel. But Food historians suggest that there was no plagiarism involved here—just parallel paths to the same basic dish. Italian Historian Roman Bracalini found a mention in a 1148 document of a festive dinner at which the third course was “lombos cum panitio” or breaded veal sirloin. The dispute came along much later.  During the Austro-Hungarian Empire, the Austrians claimed the Milanese had copied the dish.  This ugly rumor was laid to rest with the Austrian Field Marshall Joseph Radetsky wrote a letter to an adjutant of Emporer Franz Joseph stating that “I have never eaten a similar dish in Austria”.   Wiener Schnitzel with its thin slice of veal, never with a bone, breaded, fried and served with potato salad and a slice of lemon certainly comes close to today’s recipe.  So I call them Crispy Pork Chops. This is a great weeknight meal.  It comes together in 30 minutes. The key here is to have the pan ready before you put the pork chops through their three-step coating process.   You want a golden crust ideally.   I cannot get my chops to the thinness of a classic Milanese which means they’ll go darker than golden but I take them off the heat when they’d achieved a golden brown and tuck them into a pre-heated 375 degree oven to finish the cooking process and to keep them warm while I make the Fennel Onion Apple Mixture.   Then I plate them and serve.  Enjoy! Wipe out the skillet and add the remaining 1 tablespoon of oil. Add the fennel and red onion cook over moderately high heat, stirring occasionally, until crisp-tender, about 5 minutes. Stir in the lemon juice and  cook about 1 minute. Stir in the apple and season with salt and pepper and cook a further 2 minutes. Divide the pork chops among 4 plates and top with the fennel mixture. 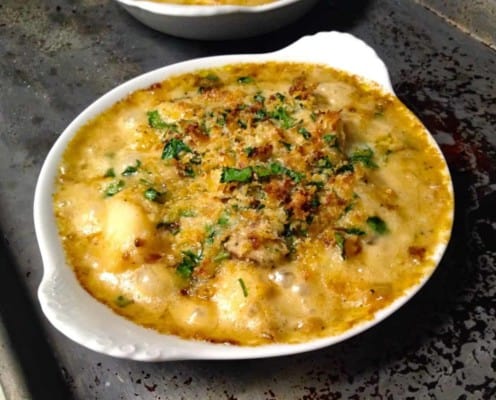