Andrew’s sister Lauren and I like to share “Comments” made by cooks about other people’s recipes.   Our particular favorites are when someone spends not one minute following the original recipe but instead enters their own little world and creates a dish that has absolutely nothing to do with the original.   The other day, Lauren came across a world class example.  A woman was commenting on a New York Times recipe for Apple pie…”I absolutely loved this pie! I made several changes though. 1. I used ripe pears & blueberries instead of apples 2. half the amount of sugar 3. I left out the ginger, nutmeg, and cloves. Also, I made the dough by hand and was short on time, so I: refrigerated it overnight (8 hours); I did chill it for the 30 minutes once it was placed in the pie plate. Baked for an hour and a half and only let it sit for 15 minutes before serving. It was piping hot and everyone loved it!”  So basically, she made something that was completely different from whatever recipe she was following…

The bones of today’s recipe came from Christopher Kimball’s Milk Street Kitchen magazine.  One of its features is a section called Tuesday Nights “Dinner. Fast. Bold. Casual.”  Well I am afraid the original wasn’t quite “Bold” enough the first time I made it. But there was a lot to love.  Chinese flavors are favorites of ours and here there were plenty of them: Black Bean Garlic Sauce, Soy Sauce, Rice Vinegar and the ‘ketchup’ of Chinese cooking, Hoison sauce.  But somehow the dish reminded us more of the Chop Suey school of Chinese Food.  Chop Suey has never seen the light of day in China.  It’s pure American Chinese food thought to have been put together by a Chinese chef feeding his countrymen as they built the transcontinental  railroad in the 1800s. Zha Jiang Mian is the real deal.  It’s famous in China and especially connected to Beijing were it’s sold everywhere from street vendors to five star restaurants.  The exact translation is “Fried Sauce Noodles”.  While the Milk Street recipe doesn’t claim to be an exact translation, it looks nothing like any photo I could find of the dish, like the one pictured here.

I revised the recipe by literally tripling the quantities of scallions, doubling the garlic, the red pepper flakes, the hoison and the soy sauce.  The result was a far more complex flavor than the first time out.  Savory and intense, the pork and mushrooms were a perfect complement to the Udon noodles underneath.  I will grant you one thing:

The dish lived up to Milk Street’s Tuesday Night premise of being Fast.  It took all of 30 minutes to

make.  And on the second go round, it was even quicker because Andrew brought home pre-sliced Shiitake Mushrooms.  Here is the recipe:

This riff on Beijing's classic Zha Jiang Mian brings Chinese flavors to your table in all of 30 minutes. It's a robust take on Pasta night at our house. 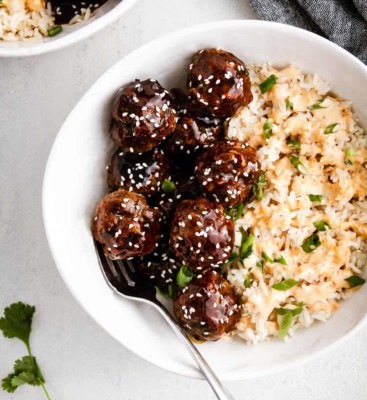 Open up your Asian pantry and make great meatballs in 20 minutes flat. When I saw this recipe in the New York Times, I had misfired with meatballs all too recently. I’ll spare the ugly details, but that recipe used un-cooked rice in a meatball […]

3 thoughts on “How about some Zha Jiang Mian for dinner tonight? Well then, how about some Black Bean Noodles with Pork and Mushrooms?”