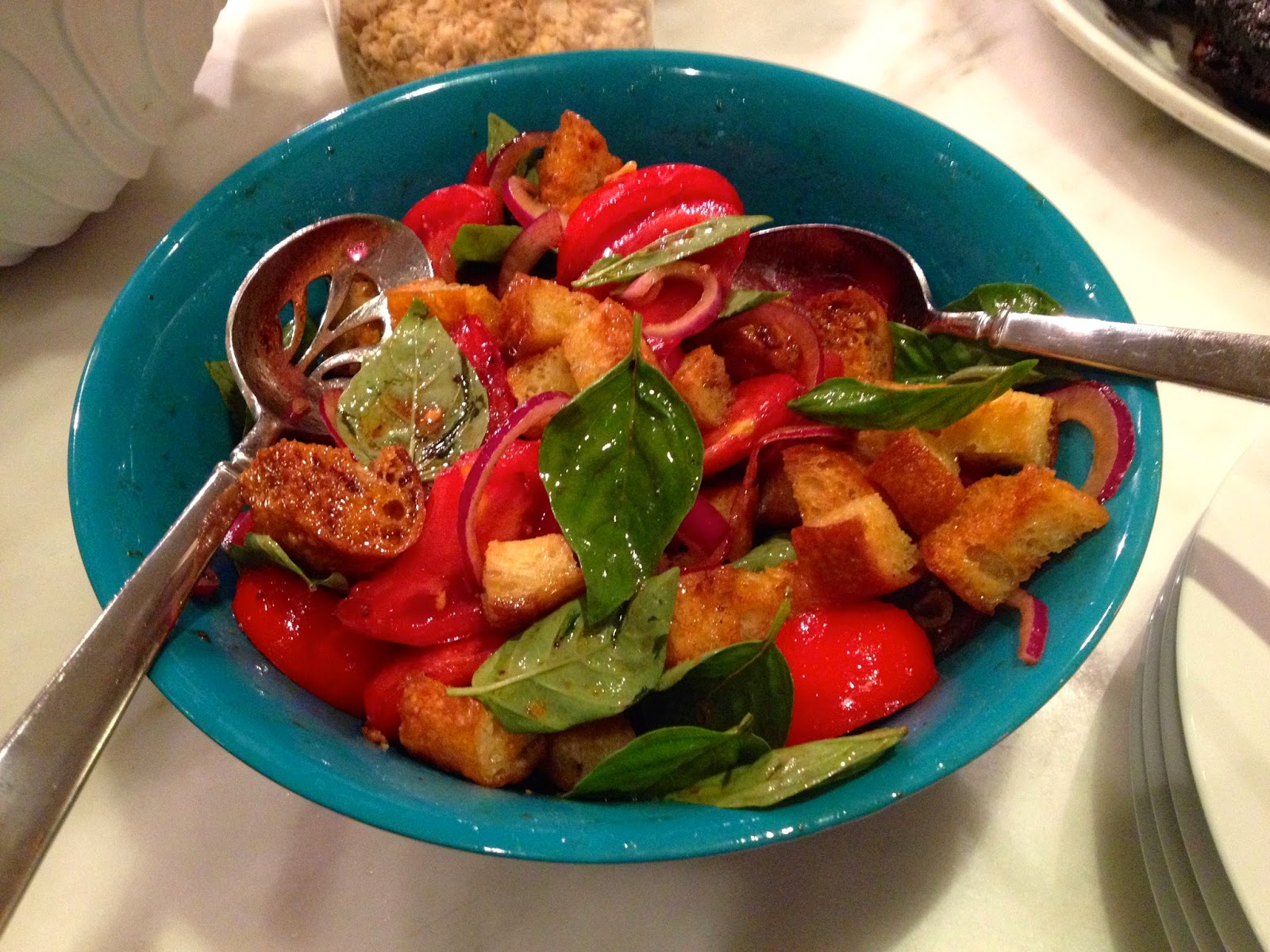 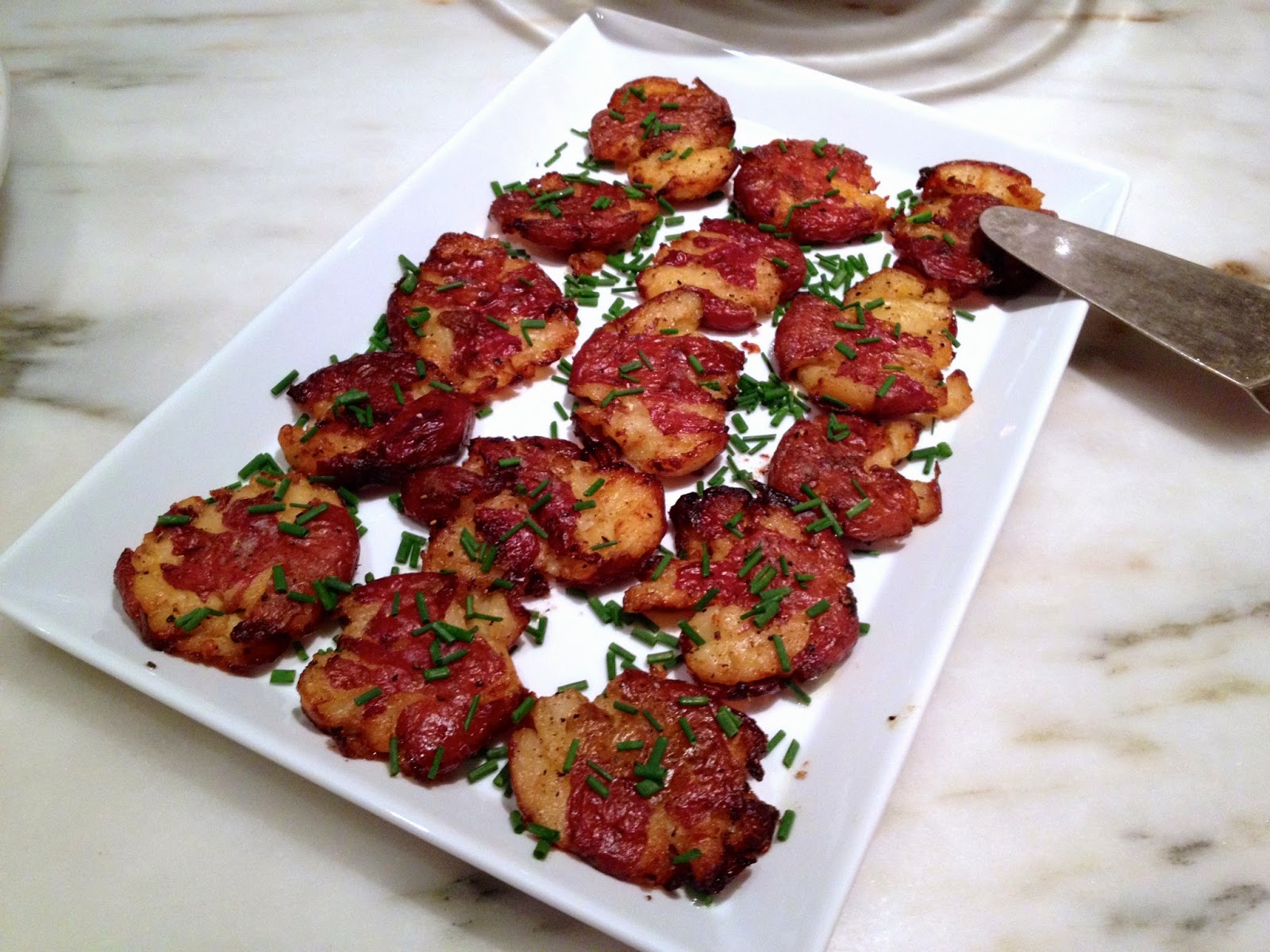 Sometimes I am astonished at what’s not on Chewing the Fat.  Just when I start to worry that I’ll never find a recipe that I haven’t already tried, I discover amazing gaps in our collection.  Take these two recipes, which I have been making for a whole lot longer than I’ve been blogging.  The first is an Italian classic.  Just as the season’s tomatoes can’t get any sweeter and riper, I love to make this easy offering of garlick-y toasted peasant bread, red onions, olive oil, vinegar and basil.  The salad has its origins in Tuscany and is a specialty of Firenze.  It’s one of those gifts of ingenuity to la cucina from the poor for whom every scrap of bread was put to use.  Almost every Italian cookbook has a recipe for this salad and you can find plenty of recipes far more complex than the one I share here.  My old and dearly remembered friend, Marcella Hazan, made hers with capers, bell pepper, anchovy filets, and cucumbers added to the tomatoes and red onions.  Today, I bring you the most basic of all Panzanella  recipes.  And thanks to Bebe Caggiano, the Italian-American food writer and chef, the next day you can lunch on the leftovers by adding  canned tuna and fresh basil to last night’s salad.  The crunch is gone but replacing it are intensely flavored ‘croutons’ and marinated tomatoes.  It’s so simple!

The second item that I was staggered to see that I had never blogged about is Smashed Potatoes.  First of all, Long Island and potatoes are like bread and butter.  Every day I pass acres and acres of them growing around here.  I’m particularly partial to the baby reds that are the first to appear at the farm stand.  And they are ideal for this recipe.  I don’t even remember when I was introduced to Smashed potatoes but it was love at first bite.  I’ve made them all kinds of ways: Sometimes fried on the stovetop in gobs of butter or even better, duck fat.  But then I read about a roasting technique in Fine Cooking magazine.   This of course is likely far healthier than fat frying your potatoes.  That being said, Fine Cooking then suggested topping the potatoes with sour cream and chives, which pretty much takes the sanctimonious behavior of oven roasting off the table.  And I discovered that the olive oil Fine Cooking recommended could be swapped out for melted duck fat.  These are heaven.  And the next best thing to a great French fry.  Maybe even better. Here are the recipes:

Recipe for Panzanella Salad.  Serves 4. Takes under 30 mins. to make. 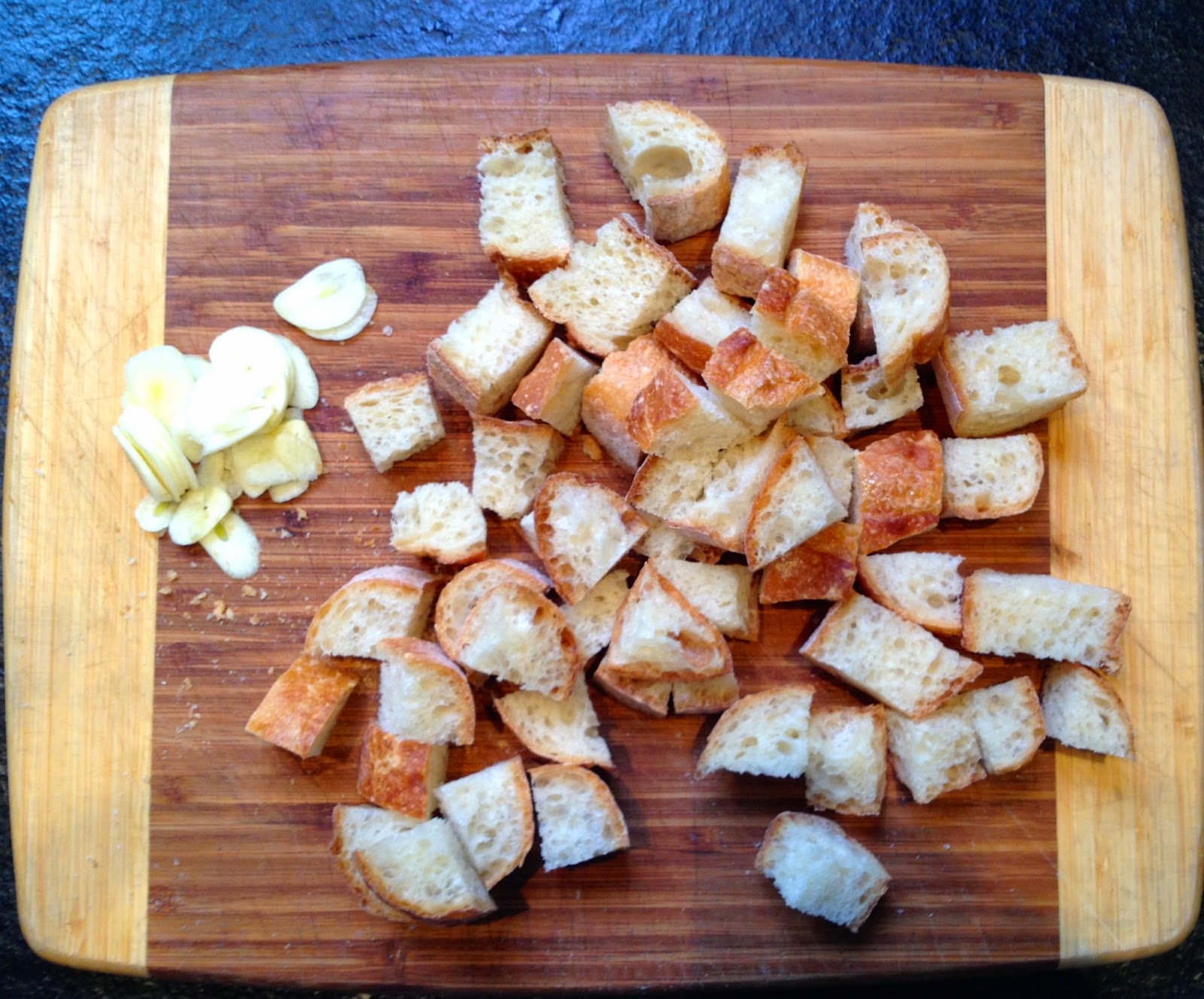 In this recipe, stale bread is called for.  If you have a great Tuscan loaf at your disposal, by all means use that. I used a three day old baguette, revived with my mother’s technique: She would leave the bread in its paper wrapper, run the wrapper very quickly under the tap, put it in the oven and voila, the bread came to life.  (Mother was hardly Tuscan but thrift was her middle name).  There may seem to be an obscene amount of butter and olive oil used here, but as Andrew pointed out,  ‘who doesn’t like fried bread’ to which I would add ‘or fried bread with tons of garlic’.
To make the salad:
½ cup extra-virgin olive oil
4 tbsp. butter
3 cloves garlic, peeled and sliced
Half a baguette or other good bread, cut into ½” cubes
3–4 lbs. any and all kinds and colors of the best vine-ripened tomatoes available
1/2 red onion, sliced thinly and soaked in water for 15 minutes prior to
adding to salad.
2 tbsp. balsamic vinegar
Salt and freshly ground black pepper
1 handful fresh basil leaves
For the Tuna Panzanella the next day:
1 7 oz. can of tuna, preferably Italian, in olive oil.
A handful of fresh basil leaves 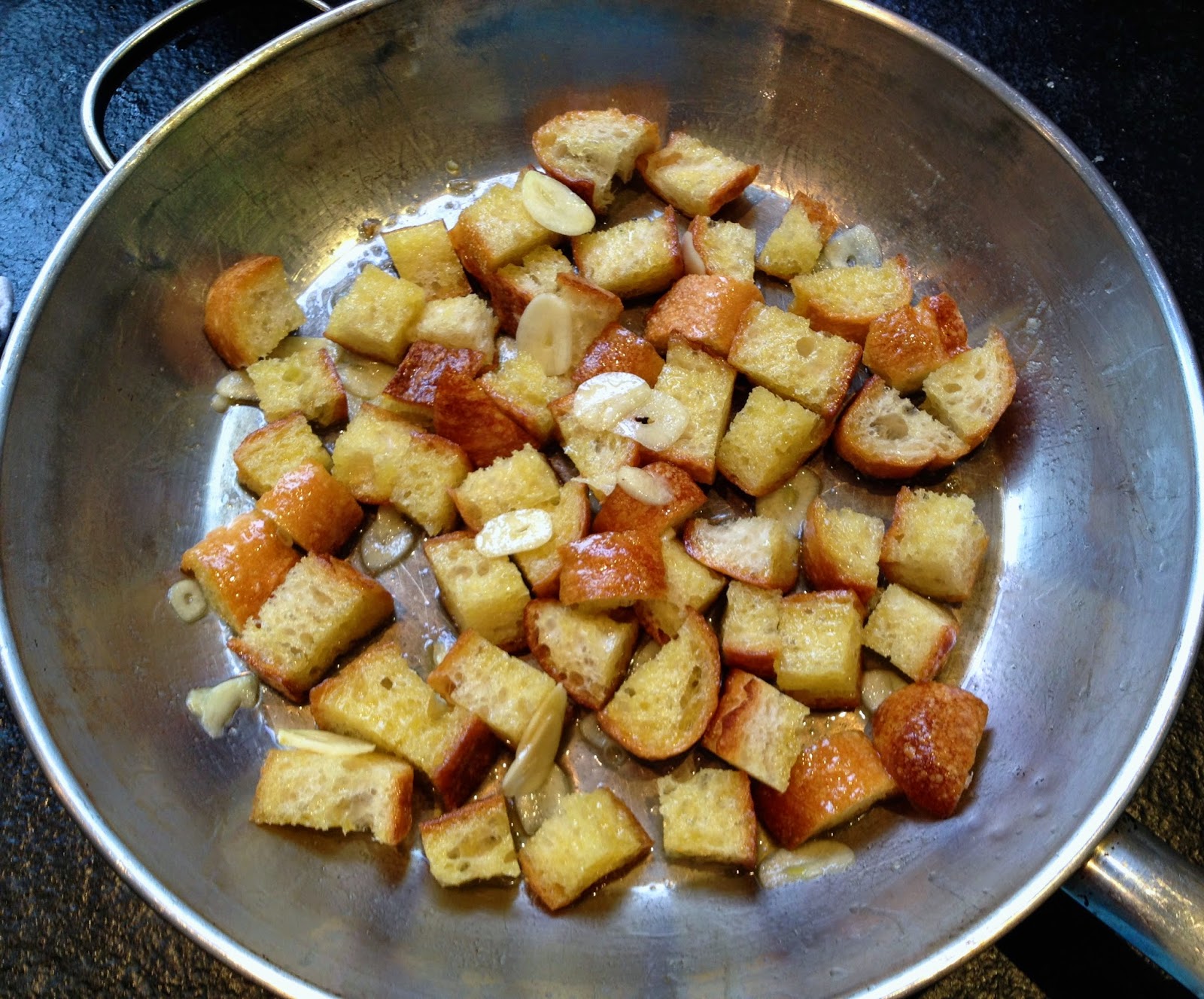 1. Preheat oven to 350°. Heat ¼ cup of the oil and butter together in a large ovenproof skillet over medium heat. When butter has melted, remove skillet from heat and add garlic and bread cubes and mix well. Place skillet in oven and bake until bread cubes are golden and crisp, 10-15 minutes. Remove skillet from oven and set aside to cool. 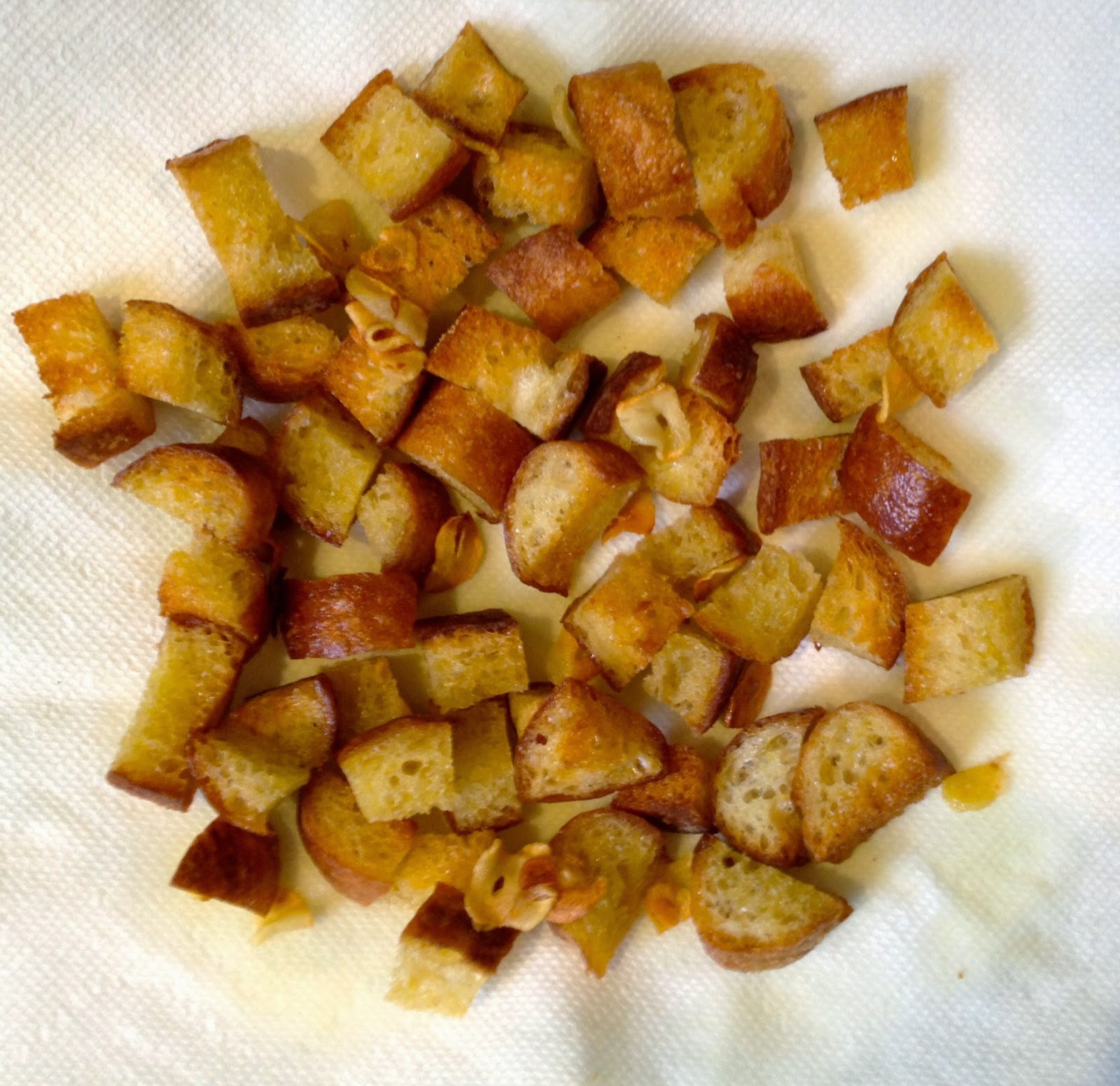 2. Put toasted croutons on paper towels to absorb any excess butter and oil.
3. Meanwhile, prepare the tomatoes: If using cherry tomatoes, remove stems and slice in half. For larger tomatoes, core and slice into medium cubes. Put tomatoes in a large bowl, add vinegar and remaining ¼ cup oil, then season to taste with salt and pepper. Mix well.

3. Shortly before serving, toss bread and basil with the tomatoes. Adjust seasonings. Spoon panzanella into each of four shallow soup bowls and garnish with sprigs of basil, if you like. 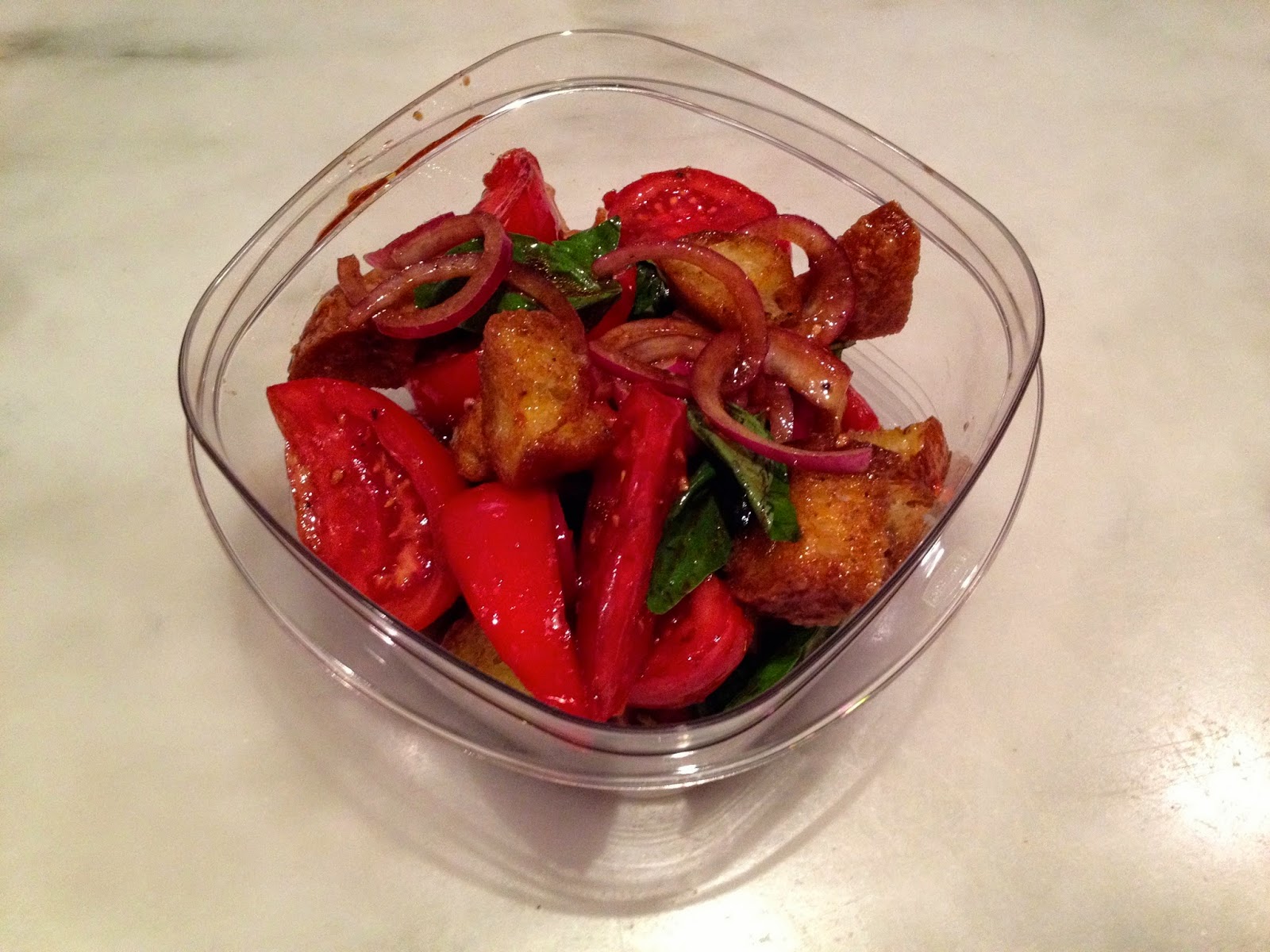 4. Save the leftovers in a sealed container, leaving them out on the kitchen counter overnight. 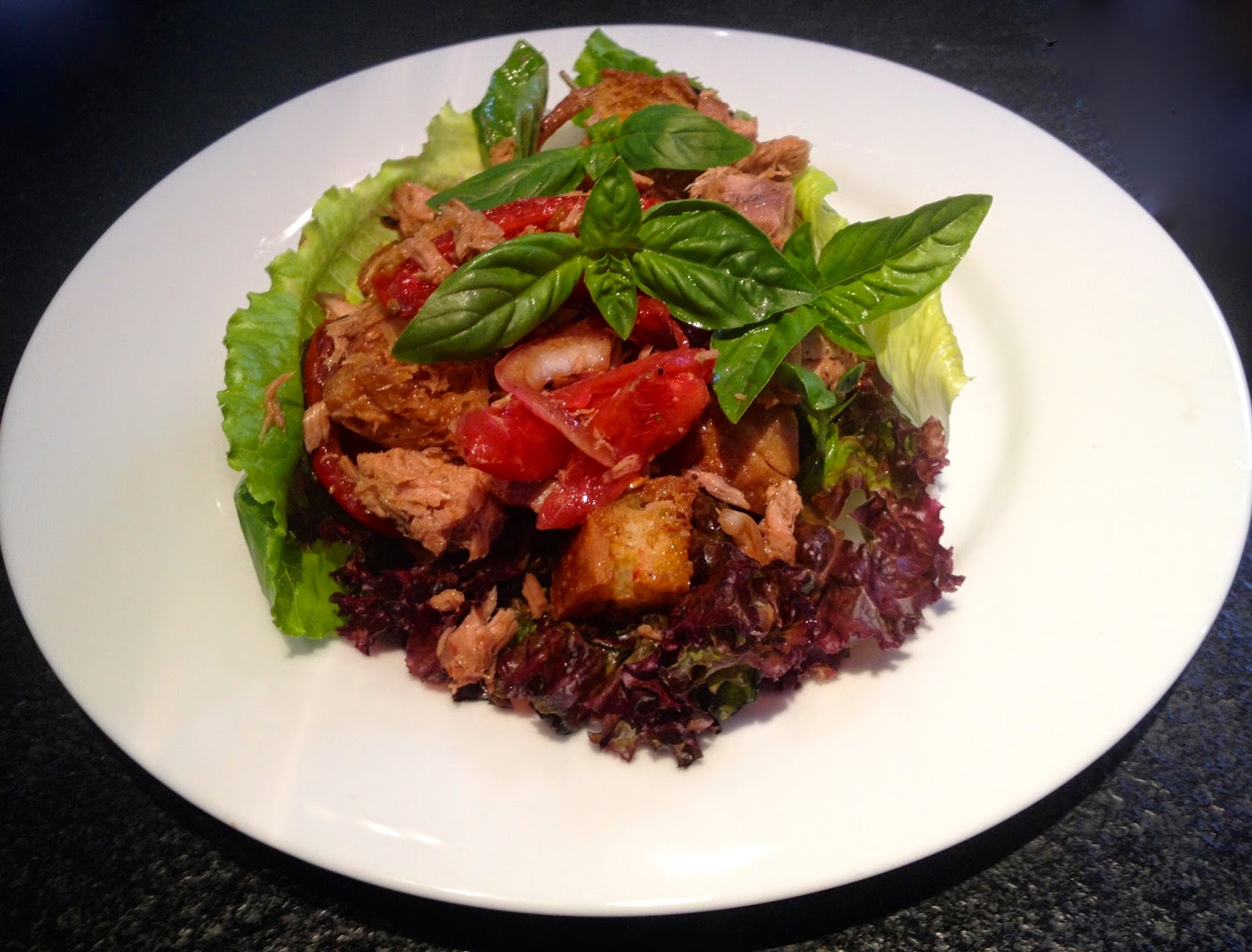 5. The next day, put the tuna fish in a salad bowl, season generously with pepper and salt and then toss the leftover Panzanella salad and the fresh basil with the tuna.  Serve on beds of lettuce.
Recipe for Crispy Smashed Roasted Potatoes from Fine Cooking Magazine. Serves 6. Takes about 1 hour to make in two ½ hour times slots, one for par-boiling the potatoes, one for roasting them in the oven.
12 to 15 baby red or yellow potatoes (about 1-1/2 oz. each;
1/2 to 2 inches in diameter)
2-3/4 tsp. kosher salt
1/2 cup extra-virgin olive oil or melted duck fat or butter
Boil the potatoes: 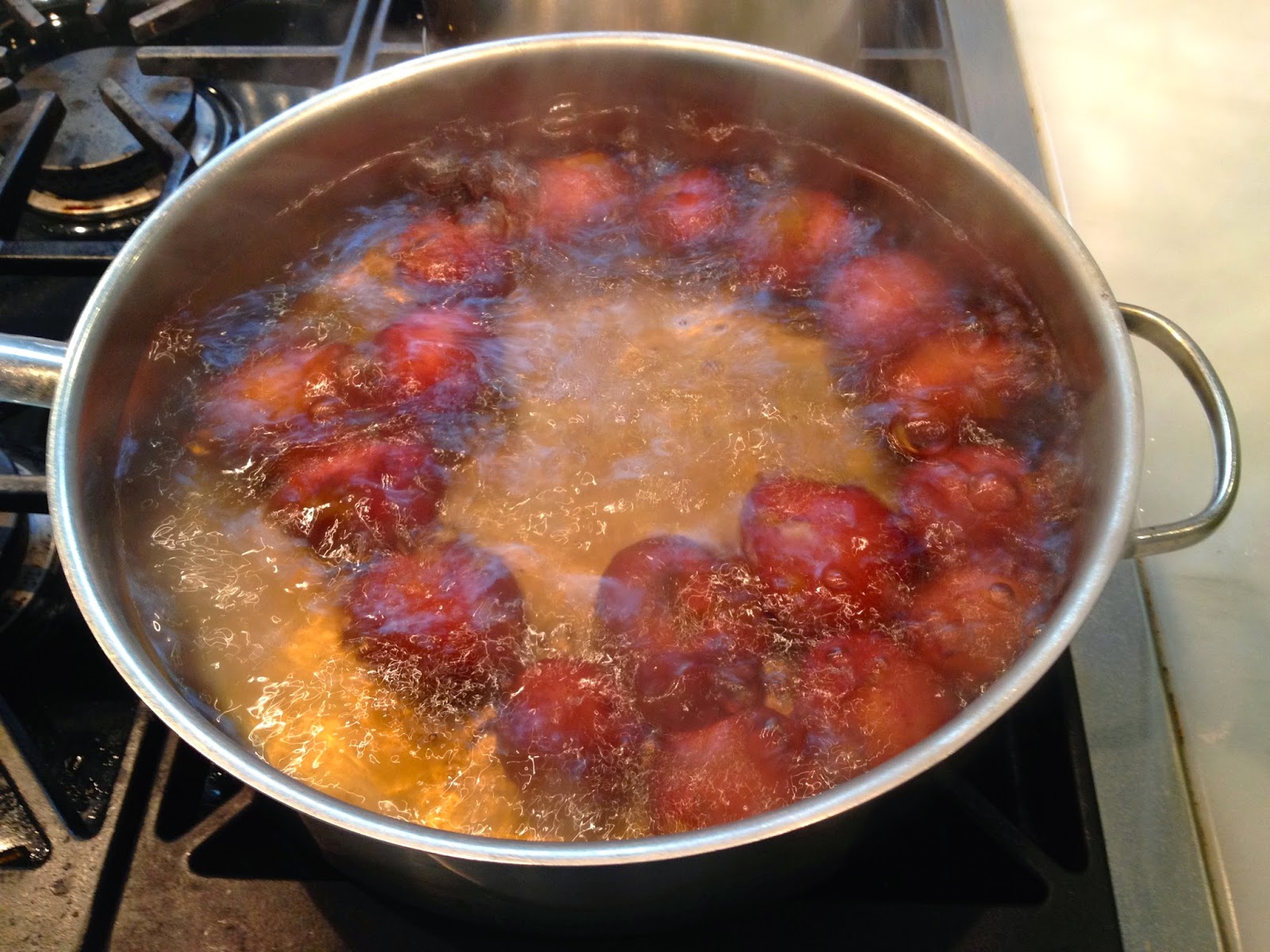 1. Put the potatoes in a large saucepan (preferably in one layer) and cover with at least an inch of water. Add 2 tsp. kosher salt to the water. Bring the water to a boil over high heat, reduce to a simmer, and cook the potatoes until they are completely tender and can be easily pierced with a metal or wood skewer. Make sure they are cooked through but don’t overcook. The total cooking time will be 30 to 35 minutes.
2. While the potatoes are cooking, set up a double layer of clean dishtowels on your countertop. As the potatoes finish cooking, remove them individually from the water, and let them drain and sit for just a minute or two on the dishtowels.
Flatten and cool the potatoes: 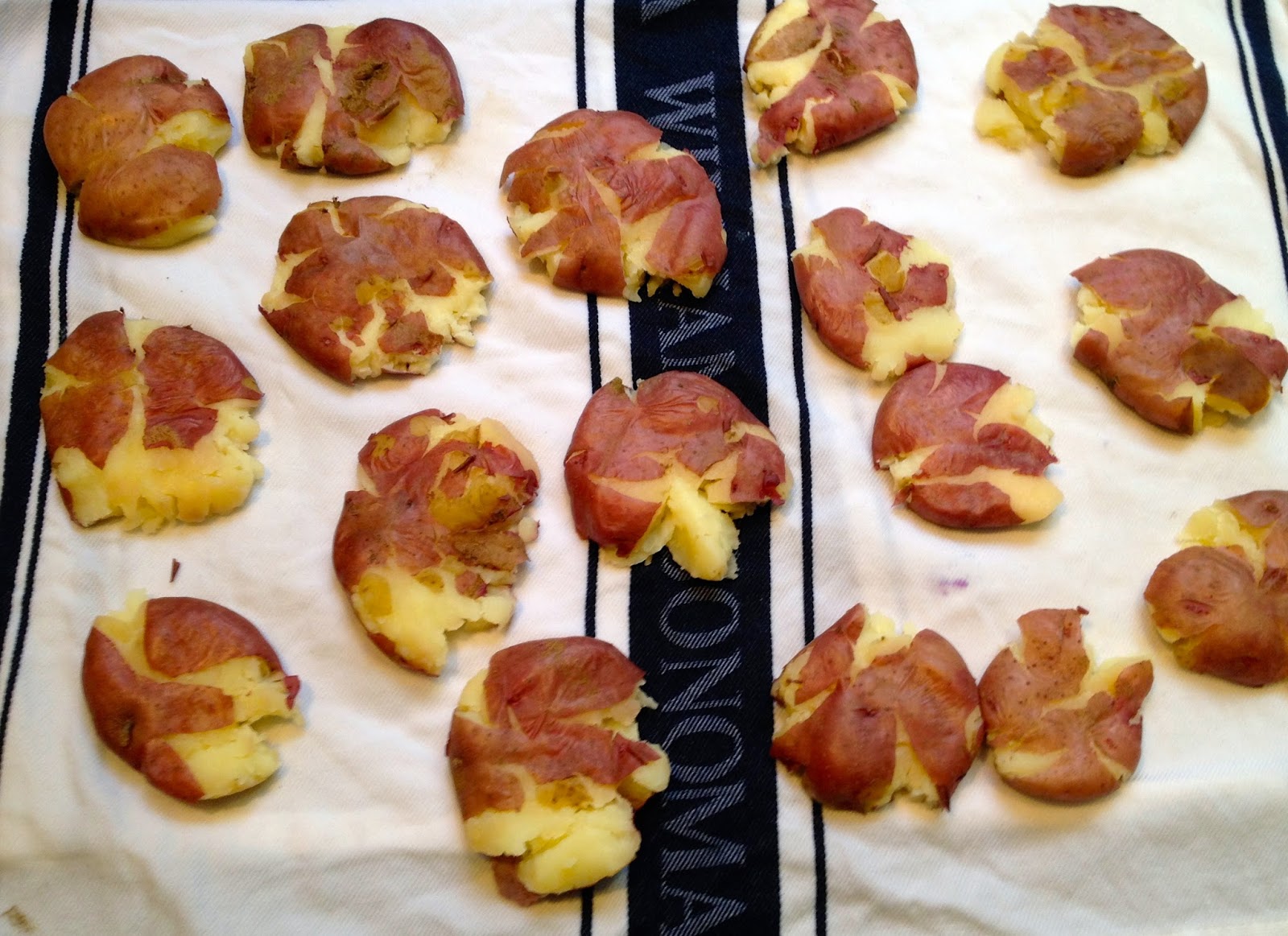 3. Fold another dishtowel into quarters, and using it as a cover, gently press down on one potato with the palm of your hand to flatten it to a thickness of about 1/2 inch. Repeat with all the potatoes. Don’t worry if some break apart a bit; you can still use them.
4. Cover a large rimmed baking sheet with aluminum foil; put a sheet of parchment on top of the foil. Transfer the flattened potatoes carefully to the baking sheet and let them cool completely at room temperature.
Roast the potatoes 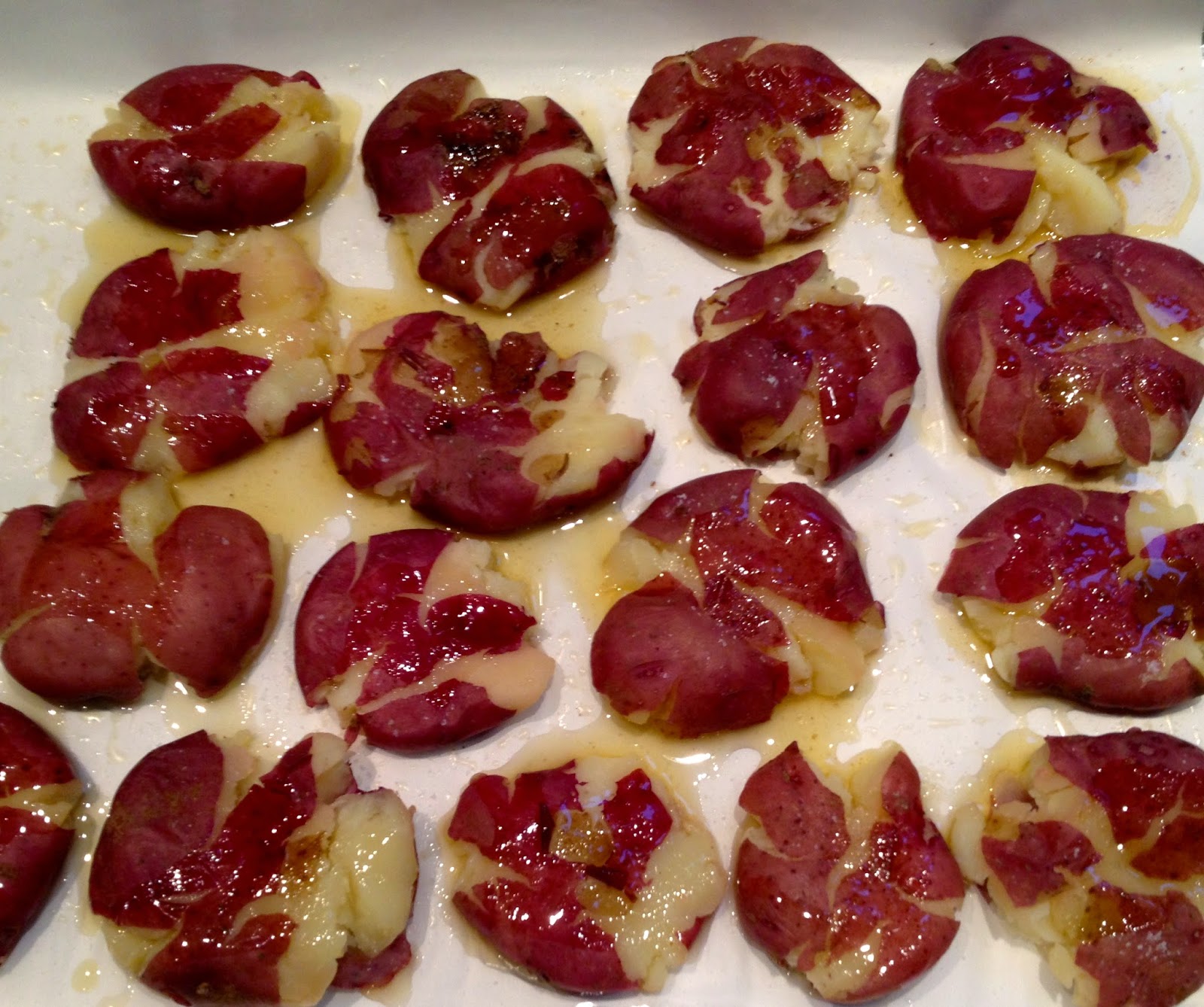 5. Remove the pan of potatoes from the refrigerator, if prepared ahead. Heat the oven to 450°F. Alternatively, if you have a convection function, turn it on and set the temperature at 400°F. Sprinkle the potatoes with about 3/4 tsp. salt and pour the olive oil over them. Lift the potatoes gently to make sure some of the oil goes underneath them and that they are well coated on both sides. Roast the potatoes until they’re crispy and deep brown around the edges, about 30 minutes if using a convection oven, 30 to 40 minutes if roasting conventionally, turning over once gently with a spatula or tongs halfway through cooking. Serve hot.

Make Ahead Tips
Do the busy work—boiling and flattening the potatoes—up to 8 hours ahead. Let potatoes cool completely, and store them on the pan, lightly covered, in the fridge. Then all you have to do at the last minute is coat with oil and salt and roast.
Author: Monte Mathews
Filed Under: Bebe Caggiano, Crispy Smashed Roasted Potatoes from Fine Cooking, Panzanella Salad, Panzanella with Tuna, Potatoes, Roasted Potatoes, Summer Salads, Tuscan Cooking, Tuscan Tomato Salad
Strawberry Spinach Salad
Grilled Sirloin Steak Salad with Seasonal Vegetables and Asian flavors