This will make this year’s Easter Dinner end on one delicious note.

Now we realize that this a very last minute post and it’s completely out of our normal publishing cycle. But Andrew is making this today and we’ll be sharing it under strict social distancing standards with some dear friends. This morning he suggested I share it with you by reposting it from a story we wrote in 2014. We hope you can use it–if not right now, at some point. Because if you love Coconut you will be over the moon with this cake.

Our friends, Don and Jeff had a dinner party this weekend.  Among the invitees were two of their friends from Miami, where they have a winter home. We’d met Jorge and Peter before.  In fact, the last time we met them, Andrew had brought the dessert pictured above (on Don and Jeff’s kitchen counter).  As it turned out, Jorge had fallen so hard for this coconutiest of all cakes, that whenever and wherever he saw Coconut cake on a menu, he would order it. For two years,  he kept hoping he’d find one that matched this incredible recipe.  And no wonder, this is a coconut lover’s dream, because it’s coconut on coconut covered with more coconut.  The result is a decadent buttery cake filled with coconut pastry cream. But it doesn’t even stop there.  Shredded coconut covers the coconut buttercream icing like a blizzard of sweetness.  It’s a three-layer cake made in a single nine-inch pan.  Is it hard to make?

A funny thing happened when someone took this recipe to their favorite bakery.

Well, I tried to convince Jorge and Peter that they too could achieve this result in Miami.  But I don’t think I got very far.   Andrew then offered the following piece of new news.  Apparently one of our friends told him that she had taken a cake recipe off Chewing the Fat, gone to her local bakery and they had baked the cake for her. I keep thinking that Jorge might be able to pull that one off himself.  Because if he did, I could almost guarantee that the baker would put this cake on their regular cake list instantly.  To non-bakers like Jorge and me, anything this elaborate looks difficult.  But Andrew assures me it’s not.  And I can promise you that the results are worth any degree of difficulty, it’s just that good.

Meet the man behind the cake. 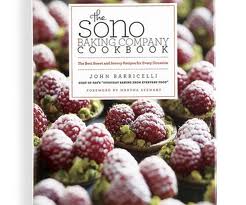 John Barricelli has appeared in Chewing the Fat before and he will again. Chef Barricelli has a background equal to his status as a third-generation baker.  He was Martha Stewart’s right-hand baker on her TV show. He hosted her “Everyday Baking Show”. Then, in 2005, he took his talents north where he opened his SoNo Bakery in South Norwalk CT.  The New York Times waxed over his wares and saying “This new bakery is superb and proves it daily”. It naturally became a reason for pastry lovers to come from all over to sample the chef’s creations.  In 2010, John wrote, “The SoNo Baking Company Cookbook” (Clarkson Potter 2010) which is where Andrew found the recipe for today’s Coconut Cake.  If you are looking around for a great baking cookbook, put this one on your list.  John is a great teacher.  And like all great teachers, his instructions are highly detailed, his explanations of techniques don’t stint on details.  All of which is to say, don’t be put off by the length of this recipe.  The devil, after all, is in the details.  Here is the recipe.

This is a coconut lover’s dream because it’s coconut on coconut covered with more coconut. The result is a decadent buttery cake filled with coconut pastry cream.