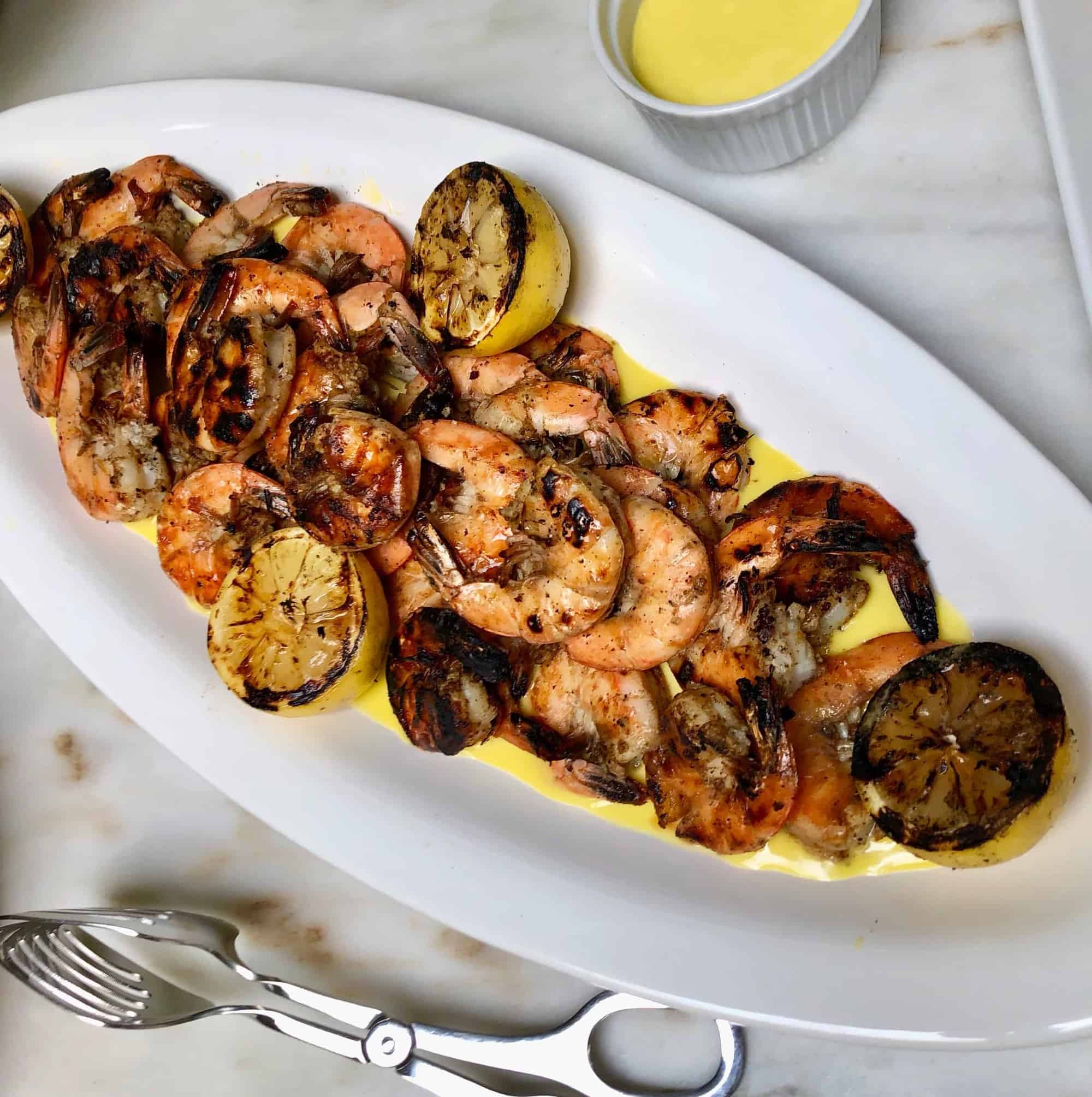 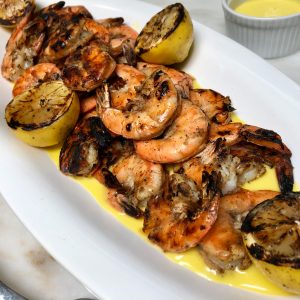 I have to say this is one of the best recipes we’ve made all summer.  What’s great about it is that it’s every bit as good hot off the grill or griddle as it is when the shrimp are cooled down or even chilled.  Sitting on a bed of garlick-y, lemon-y aioli, the shrimp are flavored with Old Bay, Baltimore’s gift to seafood of all stripes.  We first served it for lunch poolside and then brought it into the dining room for a dinner party.  The surprise on both occasions was how good the shell-on shrimp were and how easy they were to eat.  Some guests de-shelled each one but an equal number consumed the entire thing going on to rave about how they enjoyed the crunch-y shell.  That’s the way the originator of the recipe recommended they be eaten and who am I to go against the advice of Molly Baz, a Senior Associate Food Editor at Bon Appetit where this recipe first appeared.  Besides, if you don’t eat the shell, you don’t get the full flavor of Old Bay, the 80-year old seasoning mix of mustard, paprika, celery salt, bay leaf, black pepper, crushed red pepper flakes, mace, cloves, allspice, nutmeg, cardamom and ginger. and Crab Seasoning”.  Brunn had arrived in this country in 1937. A refugee from the Nazis, Brunn fled his Bavarian birthplace of Bastheim and came to Baltimore, MD where he started the Baltimore Spice Company. It became most associated with Crabs because the Chesapeake Bay was so filled with them, they were offered free with drinks at bars in Baltimore.  Brunn’s seasoning mix was salty enough to create a thirst only satisfied with another drink. After a time, its original name was changed to the snappier “Old Bay” after a passenger ship line that took travelers from Baltimore to Norfolk, Virginia. Its familiar yellow can is a fixture in our house and after you’ve made these Grilled Shrimp, it will be in yours, if it isn’t already. The recipe calls for the shrimp to be seasoned with Old Bay, Garlic and Salt briefly while you prepare the Aioli.  The first go-round, I was lucky enough to have our friend and phenomenal cook, Keith, in the kitchen with us.  My first attempt was so water-y that Keith heated a third egg yolk and we finally got a smooth, silky, garlic-y sauce that was just the right consistency to spread over the bottom of the serving dish.  The next time, absent Keith, I looked at videos of Aioli being made and discovered a couple of things that made like a whole lot easier. The first was using Canola Oil, as the recipe called for and not the Olive Oil we’d used in version one.  Canola Oil is lighter and far less flavorful than Extra Virgin Olive Oil.  So Canola Oil brought out the flavors of both garlic and lemon in the Aioli that our EVO version did not. The second change I made from our first go-around was making the Canola Oil garlic-flavored. I heated the canola oil with 3 smashed cloves of garlic for about 10 minutes over low heat. Then cooled it all the way down to room temperature.  Using the garlic-flavored oil, I cut down the raw garlic to just one clove. I won’t lie. There’s a lot of whisking that goes on to make the aioli and the oil must be added in miniscule amounts to get the sauce to the rich consistency you want.  Think of it as a bit a workout while cooking. As to the shrimp, the first go-round we lit up the grill and no doubt added smoky flavor to the shrimp. The second time, I used a grill pan on the stovetop. Other than the smoke, the shrimp were every bit as delicious. Here is the recipe with my adaptations.

: 6
: 1 hr
: Making the Aioli is the hardest part of this recipe
Print This

A truly remarkable Shrimp dish that can be served hot or cold or in-between. And oh that Aioli... According to Christian David Reynoso, his version of Shrimp Toast started life as a Staff snack at Zuni Café in San Francisco. This great appetizer can also serve as a main dish which is how we served it. A lemony, garlic-y aioli is loaded with […] In no time, a taste sensation from Simply Organic If you’re a regular reader, Chewing The Fat’s “Product News You Can Use” recently introduced Simply Organic’s expanding product line-up.  The all-organic Spice purveyor is now up to 113 offerings. We focused on 7.  When we […]