Last Thursday’s  post about the first five days of my Rhine River Getaway, brought news from many of my fellow passengers and I was so glad to hear from them.  To me travel has always been about meeting people, making fresh discoveries together, learning, absorbing and taking home more than just memories but a new way of looking at things.  So here is Part 2 where we journeyed past the Castles on the Rhine and on our way down stream to the sea. Enjoy!

The “Castles on the Rhine” of fairytale fame occupy, surprisingly, just a 40 mile stretch of the river.  So after one of the ship’s incomparable breakfast buffets, all hands were on deck for this highlight of the trip.  Only one of the Rhine castles has never been destroyed in warfare.   Numbers of them have been restored, mostly for use as luxury hotels, but only Marksburg Castle stands in its original state.  It sits on a 550-foot high perch visible for miles around. Medieval life in all its peril is on full show at Marksburg.  Knights in armor and torture chambers are both on vivid display. Just a tiny number of people lived in the castle at any one time. But you would hardly know it from the impressive kitchens of the castle. All manner of culinary tools and serving dishes are here looking for all the world like they were ready to use that very day.  There’s even a primitive butcher block counter that has served for hundreds of years dating back to the 13th century.  It’s an unparalleled glimpse into another era in the kitchen. And a must stop for culinary travelers.

Day 7.  The ship left Koblenz in the middle of the night to sail on to Koln (Cologne) Germany. 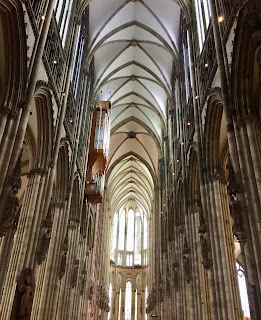 We arrived in Cologne about 9 AM.  The city was almost destroyed in World War II.  Miraculously, the magnificent Gothic Cathedral, though struck by 14 Allied bombs, maintained its twin spires though everything around it was flattened. After the war, the Cathedral, dating from 1248 was rebuilt by 1956.  Even today, work continues on further restoration which you can get a good look at on Viking’s tour. The Cathedral is within easy walking distance from the ship. While we were there, a wedding was being held in a side chapel.  The music from the service only added to the majesty of this extraordinary treasure. All around the church are buildings rebuilt after the war, many of them baring the dates of the original buildings they replaced.   There was plenty of shopping and beer drinking to be done but we headed for two of famous food attractions.

The Schokoladenmuseumis completely dedicated to chocolate.   It traces the 3000-year history of chocolate from the Mayans to its rise as a European luxury.   It’s in the right place as Germany is only bested by Switzerland in its love of chocolate.  The average German eats over 17 lbs. of chocolate a year. (The Swiss top out at a whopping 19.8 lbs.  Americans, by the way, are way down the list at 9 and a half pounds.)  Right behind the Germans come the Irish, which may explain why my fellow

Viking passenger and I were at the end of a very long line of Irish high schoolers lined up for a sample.  The museum charges an entry fee of 11.50 Euros.  Since you will sample 4 pieces of chocolate, that works out to 2.875 Euros a piece.  Entry to the Museum shop, which houses more chocolate from more places than this traveler has ever seen in his life, is free. The Chocolate Museum is directly across the street from the Mustard Museum (Kolner Senfmuseum).  More a mustard store than museum, guided tours are done only in German. I opted out and discovered that at the riverside café’s that line the Rhine, all the German I needed was “Eine Bier, bitte.”

Day 8. Kindedijk and Amsterdam, the Netherlands.

A morning sail along the River included the incongruous sight of cows sunning themselves on sandy beaches.  At a pretty little town called Gorinchem, the culinary adventurers were dropped off for today’s culinary attraction: A visit to the Booij Family and their “Cheese Farm” in Streefkirk.  This is local farming at its best.   The Booijs have been making cheese since their family’s arrival from France in the 17th century. At their small-scale facility, fresh raw milk from a neighboring farm is turned into Gouda, one of the world’s oldest and best known cheeses.  Gouda is produced using just a starter and rennet.

The milk thickens into curds which are cut and washed several times. There are seven categories of Gouda based on their age.  We sampled three of these: a young Gouda, an aged Gouda and finally a Gouda spiked with Fenugreek, the creation of the Boojis daughter, Marijke, who has inherited her family passion for superb cheese. None of these cheeses tasted remotely like the Gouda familiar to Americans. The youngest was creamy and delicate.  But as the cheese ages, the Gouda takes on a character closer to Comté. The Fenugreek brought a slightly sweet, almost nutty flavor to the Gouda.   These cheeses were so remarkable that Viking passengers can be forgiven for sneaking them into their suitcases and spiriting them out of the country.

Our Cheese Tour at an end, we rejoined our fellow passengers at Kinderdijk, likely one of the most photographed place in all of Holland.  The 19 working Windmills at this UNESCO World Heritage sites give an insight into how the country’s system of windmills and dikes make the Netherlands flood management system the best in the world. People wait years for the privilege of occupying one of these windmills.  The one we toured once housed a family with 13 children within its walls in an astonishing tight space.   Back aboard ship, it was time for our farewell dinner and one final opportunity to watch our Chinese American friends as they did Arthur Murray proud.  What dancers they are!   We continued on to Amsterdam, docking there late at night. 8 glorious days of soaking in culture along with fine wines, wonderful food on-board and ashore had ended.   Or had they?  The culinary delights of Amsterdam awaited.

Rijstaffel anyone?  Viking offers a complete two-day package in Amsterdam, if you can’t let go of your new-found shipmates.  I had a commitment in New York but I had to squeeze another day out of this trip. I had three goals in mind: 1. To see the Rijksmuseum, which had been closed for a lengthy restoration last time I was there.  2. To see the Van Gogh Collection. 3. To eat Rijstaffel, the Indonesian banquet which is practically a Dutch institution at this point.   Leaving the ship before 9 in the morning, I had the good fortune of being able to

check-in and occupy my room at NH Collection Grand Hotel Krasnapolsky the moment I arrived at the hotel.  The hotel got high marks on surveys for location and price.  I chose it for the price.  My room was tiny and in a far corner of the hotel.  But the room had everything one could possibly need.  It was also extremely quiet which was a plus because Dam Square, where the hotel is located, is decidedly not. Dam Square left me cold.  Half Times Square, Half Royal Palace, the Grand Krasnapolsky’s neighbors include Madame Tussaud’s Amsterdam, Ripley’s Believe It or Not and something called “The Amsterdam Dungeon”.  A passageway leads from the hotel directly onto the canal side Voorburgwal which is lined with “Coffee Shops”, Amsterdam’s notorious Cannabis Cafés.  Did I go into one? Yes.  Did I inhale? Next Question.

As my time in Amsterdam was limited, I quickly made my way to Blue Boat Tours for the mandatory Amsterdam Canal cruise.  Away from Dam Square, the city is a charming collection of canals, beautifully proportioned houses and multitudes of houseboats of every size and description.   I chose Blue Boat because of its proximity to the massive Rijksmuseum.  Applause, applause for the Audio tour of this remarkable repository of Dutch art, architecture, and furnishings.  The Audio Tour breaks it down into a tour length of your choosing.  I went for the hour and a half long “Highlights” tour.  It took in the Dutch masters from Rembrandt to Van Gogh. It’s hard to underestimate the sheer scale of this magnificent collection and its remarkable home.  This is not to be missed.

To fulfill my Rijstaffel wishes, for dinner, I went to a restaurant recommended by a friend who’d lived in Amsterdam.  Within walking distance of the hotel, Indrapura, at Rembrandtplein 42, (Tel: +31 20 623 7329), was just the ticket.  The astonishing array of dishes tallied up to all of 30 Euros. And perhaps most astonishingly the server recommended a Malbec to accompany the Asian flavors of the Rijstaffel.  I still wonder if beer would have been a better alternative.  A quick tram ride using a 24 hour transit pass that cost all of 5.50 Euros, and I was home.

Since I scheduled my flight home through Paris in late afternoon, I took advantage of the morning to head to a remarkable museum.  Before I’d left home, I’d booked my admission to the Van Gogh Collection for the first group into the Museum as it opened at 9 am. Again, I took the Audio Tour.  Again, this was a truly impressive way to see the works on offer.  In this case, one could easily pause at the highlights and stop at any one of Van Gogh’s remarkable range of work that took in his entire artistic career.  The collection had been presided over by Van Gogh’s namesake and nephew, Vincent, the son of his devoted brother, Theo.  When Van Gogh died of a self-inflicted gunshot in 1890, Theo inherited all of the painter’s collection.  Theo himself died just 6 months later and his widow, Johanna set about selling many of Vincent’s 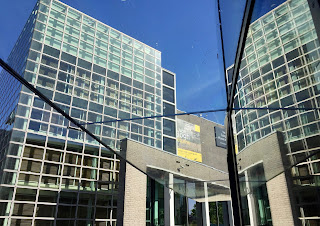 works. This was done as an effort to spread the knowledge of the painter’s phenomenal eye and singular techniques.  Van Gogh had had little commercial success.  In his entire lifetime, he had only sold one painting.  Fortunately for today’s visitor, Johanna maintained a private collection of which her son Vincent loaned to the Stedelijk or Municipal Museum in 1925.  In 1962, the collection was transferred to the Vincent Van Gogh Foundation and in 1973, this glorious museum opened. It is the second most visited museum in Amsterdam and worth every moment you can spend there.   Vincent Van Gogh suffered severely from mental illness which is not swept under the rug here.  Instead, there’s even a time line showing how the diagnosis of his illness, now recognized as bi-polar disorder, changed over time. 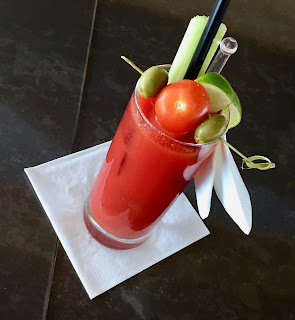 The only treatment he received, when confined to an insane asylum, was the taking of freezing baths.  The lesson in the Van Gogh Museum is not how he worked because he was mentally ill but how he painted despite it.   When I go back to Amsterdam, I’ll allot much more time at this Museum.  But i t was time to leave for the airport, a short flight to Paris and then an Air France Premium Economy flight to New York.  With a Bloody Mary in hand, I silently toasted Viking River Cruises for this incredibly wonderful way to travel.  Until next time…Skol Viking! Although the gigantic plate of sweet indulgences may lead you to believe otherwise… This is an account of my November voyage on Viking Jupiter as we sailed from Rome (Civitavecchia to be precise) up the coast to Florence and Pisa (Livorno to be precise).  Then […] We came back from Greece with a new fondness for Phyllo Andrew and I were blown over by our time in Greece. We loved every minute of our ten-day voyage aboard Silversea’s magnificent Silver Moon.  We were invited to sail on Silver Moon to participate […]