Come along for a Cooking Class at Sea and take home recipes for Lobster Cakes and Coconut Profiteroles! My latest article for The Daily Meal has arrived! Learn to Cook Like Viking Ocean Cruises’ Chef While on Board
Jan 6, 2017 | 4:54 pm
By
Monte Mathews
Staff Writer
Viking Ocean Cruises’ hands-on cooking classes beat the competition, hands down.
Cruise ships have jumped on the culinary bandwagon in a major way. There’s virtually no  major cruise line that doesn’t offer cooking demonstrations, wine and chocolate tastings, even celebrity chef appearances. But for those of us who want to get our hands dirty, the selection becomes far more limited. The “Big Three” — Carnival, Norwegian, and Royal Caribbean — confine their culinary arts offerings to shore excursions only. Then there are the ships where you can look, but not touch, at demonstration kitchens where cooking “classes” consist solely of watching the pros and, with any luck, sampling their dishes.
On Holland America, Food and Wine Magazine partnered with the cruise line in its Culinary Arts Center. Celebrity cruises paired up with Bravo TV to present “Top Chef at Sea” events on many sailings. Disney, Princess, Seabourn, and Crystal all offer cooking demonstrations among their enrichment activities. Princess, for example, offers “Chef’s Table” at sea as part of the [email protected] program. Passengers are invited into the ship’s galley where chefs reveal their favorite recipes. But what none of these lines offer are hands-on opportunities to touch, feel, and work with the ingredients — to actually cook something.
There are exceptions. Oceania has audience participation classes on two of its five ships. Luxury carrier Silversea has a Relais & Chateaux L’Ecole des Chefs cooking school at sea and entire itineraries dedicated to a curriculum of culinary events on its “Cooking School Voyages.” And Regent Seven Seas recently launched its first at-sea “Culinary Arts Kitchen” on board what is being billed as the most luxurious ship ever to set sail, Seven Seas Explorer. Passengers can fire up their induction cooktops at one of 18 individual cooking stations, all with ocean views. But for mere mortals, the program offered by Viking Ocean Cruises is a winner. It combines the full attention of one of the chefs responsible for giving Viking the highest passenger rating for food in the industry, according to Cruise Critic, the No. 1 web site for cruisers. 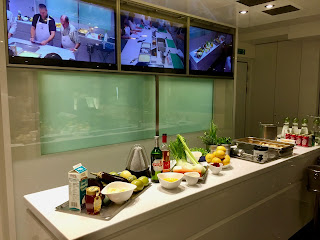 Offered on sea days, classes are limited to 12 eager gourmets. Held in “The Kitchen Table,” a kitchen equipped with giant TV monitors so that no one in the place misses a beat of the whisk, this glorious space is ideal for both preparing and serving the meal. On a recent trip where Viking Star was being re-positioned from New York to San Juan, we attended an all-morning class conducted by chef Romain Boulloud.
Boulloud is responsible for the output in the stellar “Chef’s Table” one of two specialty restaurants on board. The chef’s peripatetic career started in his home in Lans En Vercors in the French Alps where he owned a restaurant called Brasserie de Marais. From there he ventured to Leister in England, to Monaco’s Hotel Metropole, and the Michelin-starred Chevre d’Or in Èze. In between, the chef took to the sea to cook aboard prestige ships like Paul Gauguin and both Seven Seas Voyager and Mariner. Under his supervision, we prepped ingredients for a three-course meal using recipes that would be featured on Viking’s Caribbean itineraries this winter.
First up was the appetizer, a panko-crusted lobster cake. Golden brown and filled with both lobster and crab meat, the cake sat upon a rich lobster broth garnished with cress. Next up, our main course featured seared mahi mahi, the recipe for which we’ve published here: https://chewingthefat.us.com/2016/11/cuisine-on-worlds-1-cruise-line.html Finally, we came to dessert. Here we created a simply beautiful coconut profiterole dish. Mercifully, the choux pastry used was pre-prepared so it fell on the cooking school class to make the filling, cut the profiteroles in two and pipe in the coconut cream. A lesson in plating followed as we brushed the plate with chocolate sauce, added kiwis, oranges and strawberries, raspberry sauce, and a sprinkle of roasted coconut. At the end of the class, the sommelier appeared with wines to accompany every course and we sat down to lunch with a sense of accomplishment on every plate.
Here are the recipes:
Panko Crusted Lobster Cake
Viking Ocean Cruises’ cooking class recipe
By
Monte Mathews
Staff Writer 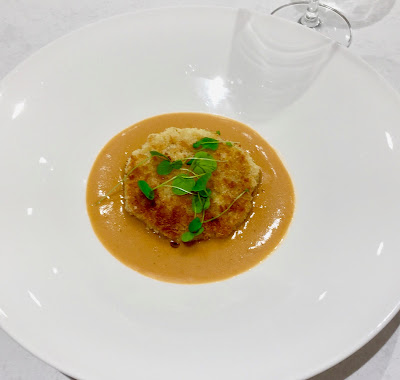 3 eggs, beaten
For the lobster broth:
4.4 Pounds of lobster shells

1 Cup heavy cream
For the garnish and plating:
5 Ounces of cress, fresh

3 Ounces extra-virgin olive oil
Directions
For the lobster cake:
In a big bowl, mix parsley, 2 oz. breadcrumbs, egg, Worcestershire Sauce, lemon, butter, Dijon mustard, and mayonnaise.  Gently fold in the crab and lobster meat.
Season to taste with salt, ground pepper, and cayenne pepper.
Divide the mixture into equal portions; using the ring cutter (No. 60) to shape into a cake. Place on a baking sheet lined with parchment paper. Refrigerate for 5 hours before next step.
Dip the crab cakes first in flour, then in the beaten eggs, and finally in the 5 ounces of breadcrumbs.
Cool in the fridge until needed (45 minutes at least).
Fry the finished cakes in butter until golden-brown and finish in a 325-degree oven until hot on the inside.
For the lobster broth:
Using kitchen scissors, cut the lobster shell into small pieces and bash them roughly with a meat mallet to loosen as much meat as you can (this adds flavor to the broth). Heat the oil in a cast-iron Dutch oven. Add the lobster shell pieces and sauté until bright pink and lightly caramelized.
Add butter, onion, carrots, celery, fennel, and garlic. Sauté for another 10 minutes, until everything is aromatic and the vegetables softened but not browned.
Add the tomato paste, stir well and cook for 2 minutes. Deglaze with the Pastis or Pernod, stirring well until the liquid disappears. Pour the cognac and flame. When the alcohol is totally burned, add the tomatoes and fish stock. Bring to a boil, add the bouquet garni and simmer gently for about 40 minutes.
Stir from time to time to prevent the shells from sticking to the bottom of the pan.
Remove the bouquet garni; using an immersion blender, liquefy the broth then strain through a fine sifter.
Season to taste with salt and pepper. Finish with cream.
Before serving, finish with an extra splash of Ricard and fresh orange juice.
For the garnish and plating:
Place mix of the herb garden cress in a bowl, drizzle with extra-virgin olive oil and lemon juice. Pour the broth into shallow bowls. Place a lobster cake atop the broth. Top with the cress salad.
Coconut Profiterole
Viking Ocean Cruises’ cooking class recipe 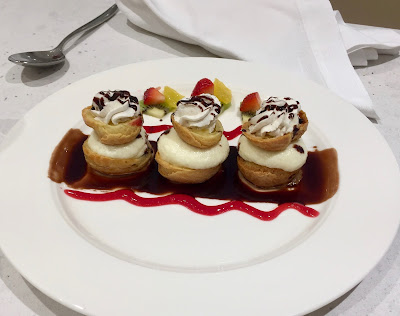 1 bunch of mint
Directions
For the choux pastry:
Prepare pâte à choux, making a total of 36 pastry shells.
For the filling:
Mix the coconut purée, milk, coconut paste, and Malibu rum in a large bowl. Fold in the mascarpone, then fold in the whipped cream and refrigerate.
Cut the pastry shells in half and pipe the coconut cream into the bottom half by using a star nozzle (No. 6). Sprinkle with shredded coconut. Place the second half of the pastry shell atop the cream-filled bottom half.
Mix cinnamon into the whipped cream and gently whisk until incorporated. Put the cinnamon-infused whipped cream on top.
For the plating:
Brush the plate with chocolate sauce. Place 3 profiteroles atop the chocolate.
Place diced kiwi fruit, orange segments, and cubes of strawberries around the pastry.
Pipe dots of raspberry sauce between pieces of fruit and sprinkle with roasted coconut.
Pour more chocolate sauce over the profiteroles. Place a rosette of whipped cream and a sprig of mint atop the pastry. Serve.