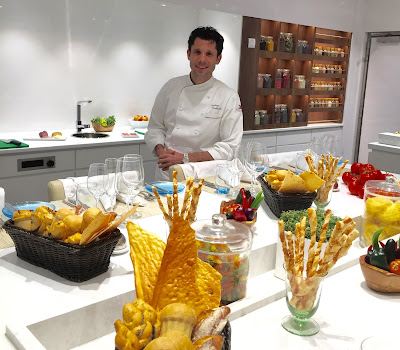 Chef Anthony Mauboussin in action aboard the Viking Sea. 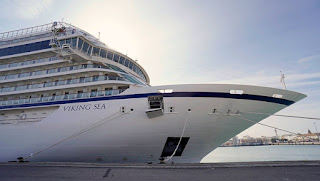 Since last year’s launch of its first ocean cruise liner, “Viking Star,” Viking Cruise Line has stunned passengers and cruise critics alike with its gleaming ship and emphasis on learning and discovery through travel. In its first year, itineraries included ports from Istanbul to Stockholm. Aboard the 930-passenger ship, Viking’s Chairman Torstein Hagen broke all the rules: The Norwegian Spa is open to everyone, every cabin has a balcony, at every port there’s an included shore excursion, there are no children under 18 allowed, and not one extra penny is involved with eating at any of the ship’s specialty restaurants, where complimentary wine and beer accompany every course.
And how is the food? Simply spectacular. It is a mix of specialties from each country visited, and an array of classics so that the overwhelmingly American passenger list feels right at home.  But for those passengers with a taste for culinary adventure and learning, Viking Cruises has a program that tops anything we’ve ever seen at sea. 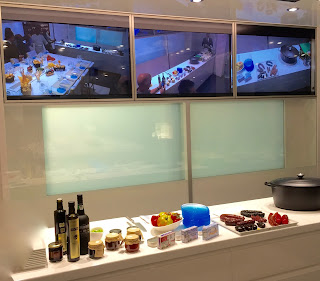 Aboard the maiden voyage of “Viking Sea,” the second of a planned fleet of six identical ships, we were fortunate enough to take part in The Kitchen Table experience.  Every Viking Ocean voyage includes this culinary event, with some very lucky voyages featuring it twice. Locations are chosen for the richness of their local markets. From Gdansk, Poland,to Pointe à Pitre, Guadeloupe, 12 guests are taken by minivan to the market, accompanying the executive chef of the ship. Once there, the chef puts together a menu of local ingredients as you watch. These ingredients are then brought back to the ship for the preparation of an elaborate evening meal served at the ship’s own Kitchen Table, a demonstration kitchen and eating area superbly designed to accommodate both cooking and dining. 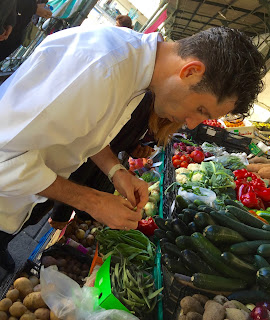 Our excursion into Porto, Portugal’s Mercado do Bolhão was presided over by none other than the culinary director for all of Viking, the charming and ridiculously handsome Anthony Mauboussin. Chef Mauboussin is responsible for the culinary output on all 65 Viking River ships as they traverse waterways from the Mekong in Vietnam to the Douro in Portugal. The two Viking Ocean ships are the chef’s crowning achievements in restaurant arts. Chef Mauboussin has a lengthy and distinguished background in the Cruise Industry: He started his seagoing career with Celebrity, moved up market with Azamara and Oceania, and landed in the top spot aboard The World (Residence at Sea), the world’s most exclusive condominium cruise ship. Chef Mauboussin worked closely with Michel Roux of England’s three-Michelin-star Waterside Inn. In fact, it was this association that led to Mauboussin’s seafaring career when Roux was tapped by the Apollo Group to upgrade Celebrity’s menus. 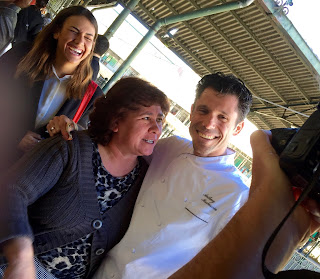 Chef Mauboussin’s International style of cooking is ideal for his role in Viking’s Kitchen Table. Our trip to the Porto market was the basis for a complete Portuguese menu. The chef moved about the stalls of vegetables, cheeses, charcuterie, and fish carefully seeking the perfect ingredients for our feast.  The four courses would include a starter of Portuguese cheeses and dried and cured meats and sausages. These were sourced from a wonderful old vendor whose eyes lit up at the 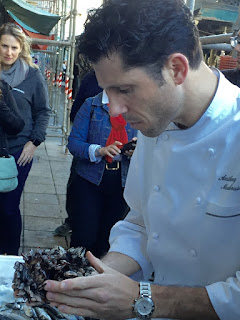 sight of our white-coated chef.  The vegetable seller was even more effusive as she vouched for her father’s farm-grown heirloom tomatoes, which the chef added to our menu on the spot. At the fishmonger’s stand, chef Mauboussin picked up a kilo of barnacles, a local delicacy that found its way to the table in a “Mariscada de Sesimbra” of steamed lobster, shrimps, clams, mussels, and crab.  Pork knuckle, beef belly, and chorizowere combined in the chef’s feijoada, which has the distinction of being the national dish of both Portugal and Brazil. (A recipe for Feijoada follows) 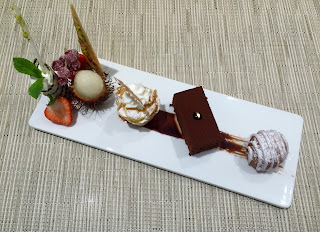 The market contributed to every dish except the extraordinary trio of Portuguese desserts produced by the ship’s master pastry chef. Pastel de nata, Port wine chocolate cake, and bola de Berlim finished an amazing meal.
While the description of the program included participation in the actual cooking of the meal, in this instance it was left to Viking’s gifted kitchen

brigade. All we had to do was to show up at the appointed hour at the ship’s gleaming white Kitchen Table. There, both the Executive Chef of Viking Sea, Ashley Duff, and Mauboussin were waiting, their elaborate mis-en-place at the 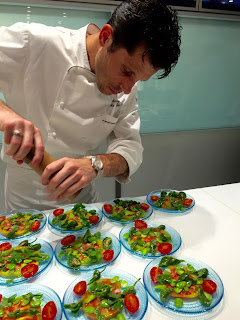 ready. Course by course, the chefs created our meal in front of us. The presentation was stunning. And as each course was served, Viking Sea’s resident sommelier — the lovely and charming Lorena Merlini — had selected the perfect wine as an accompaniment. The wines selected were as international as Viking itself. Veuve Clicquotfrom France, Hartenburg Chardonnay from South Africa, and Viña Maquis Cabernet Franc from Chilewere served with dinner, and Tenute Antinori, a Vin Santo from the sommelier’s native Italy, was served with dessert. As at every meal, wines aboard Viking are complimentary. These particular vintages were specially selected for this Kitchen Table menu. Although our meal stretched out over a leisurely three-hour period, the food-centric conversation never ebbed. The meal was judged to be a complete success and ended with a series of toasts to the chefs and their unique offering aboard this incomparable new ship.

Please note: Although Viking Ocean features included shore excursions at every port, for a reasonable up-charge guests can select additional shore excursions that include many culinary-themed guided tours of wineries, cheese producers, markets, and restaurants. The Kitchen Table tops the list price-wise, with a surcharge of $199 per participant. However, this is certainly not a fortune for a meal you’ll remember as one of the culinary highlights of your remarkable Viking adventure.
Looking to make your own feijoada at home? Try this recipe, which almost exactly mirrors Chef Mauboussin’s.

Recipe for “Feijoada a Transmontana” 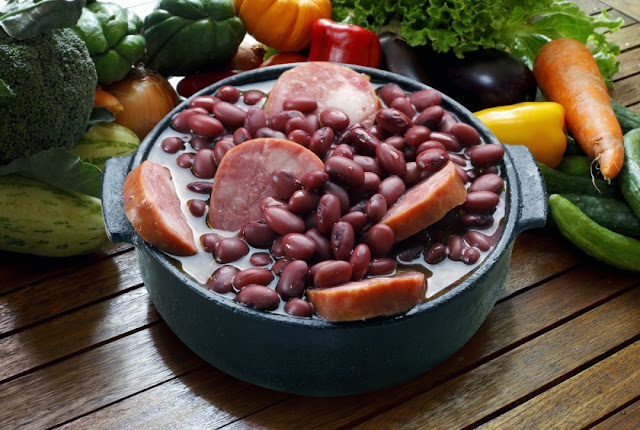 The national dish of Portugalhas a worldwide following. The basics of the dish — beef, pork and fijão (beans) — is shared by all the country’s former colonies from Brazil to Macau, and you’ll find variations in Angola, Cape Verde, Mozambique, and Goa in India, too. However, Feijoada à Transmontana is considered to be the most traditional of all recipes and the basis for all other feijoadas. It originated in Northern Portugal and has been embraced by Portuguese gastronomes ever since. It’s also a perfect party dish, as the recipe can be expanded to feed any number of guests. This meaty dish combines many Portuguese flavors and spices, which fortunately are commonly found in American kitchens. This is no minute-meal, but your reward for its preparation will be a genuine taste of Portugal in a dish that’s bound to impress.
This recipe comes courtesy of Maria Dias of Portuguese Diner.
2  Pounds  baby back ribs
2  Pounds  chouriço sausage
1  Pound  blood sausage or morcella (optional, if you can not find it locally)
1  Pound  pork belly
1  Cabbage
2  Carrots, sliced
2  Onions, minced
4  Garlic cloves, chopped
1  Tablespoon  butter
1/4  Cup  olive oil
2  bay leaves
1  Teaspoon  sweet paprika
1  Teaspoon  cumin powder
64  Ounces  cooked kidney beans
1/2  Cup  crushed tomatoes
2  Pounds  pork hocks, knuckles, or ears (available at most butcher shops)
Salt and pepper, to taste
1. The night before cooking, coat the ribs with salt, wash the pig parts in cold water, salt them, and store in fridge overnight to absorb the salt.
2. The next day, cook the pig parts in a large saucepan with 2 cups water until they are soft and tender. Reserve one cup of the broth.
3. In a large saucepan cook the onions, garlic cloves, and bay leaf in the olive oil for about 5 minutes.
4. Add the ribs, pork belly, and paprika. Let them cook for about 5 minutes on medium heat.
5. Add 1 cup of the reserved broth from the pig parts to the pan and let the ribs cook for another 20 minutes, stirring occasionally.
6. Add the rest of the meats, chopped cabbage, carrots, crushed tomatoes, and butter.
7. Stir gently and let them cook on medium heat for about 20 minutes. Add the kidney beans and blood sausage, and cook for another 13-15 minutes.
Check if the meats are tender and done, then let it simmer on low heat for a couple more minutes.
8. Once done, season with salt and pepper to taste. Serve while hot.
Author: Monte Mathews
Filed Under: Anthony Mauboussin, Cruise Travel, Cruise Travels, Culinary Vacations, Day 4 of Viking Sea's Maiden Voyage, Feijoada, Review of The Kitchen Table Viking Ocean Cruises, Stews, The Daily Meal Viking Ocean's Kitchen Table, Viking Cruises, Viking Ocean Cruises, Viking Ocean Reviews
Tags: Cruise Travel Silversea Cruises Introduces Culinary Voyagers to Vietnamese Cuisine Apr 25, 2018 | 11:15 am By Monte Mathews Staff Writer Both aboard ship and ashore, this cruise line brings its passengers great Vietnamese food Vietnam is a perfect country for cruising.  It hugs a 1,600 mile […]