Home » Day Three of the Maiden Voyage of Viking Sea….we finally cast off!

Day Three of the Maiden Voyage of Viking Sea….we finally cast off! 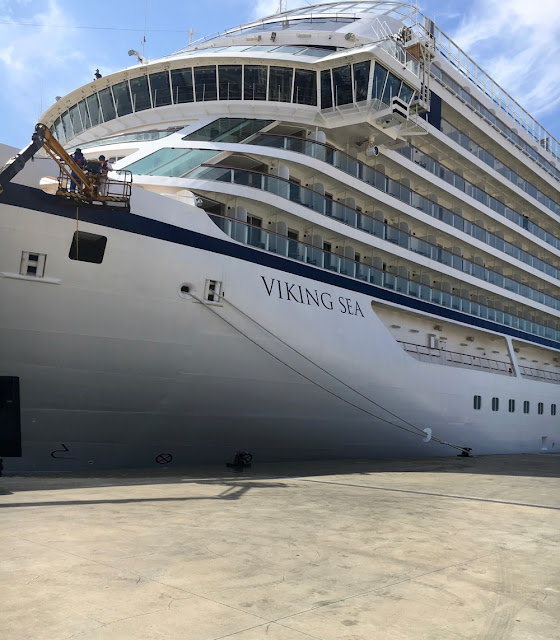 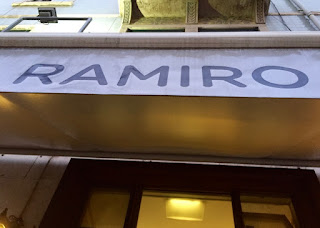 But first, about last night…it was our second and final night in Lisbon and my good friend Bruce highly recommended Cervejaria Ramiro (1 Avenida Almirante Reis, Lisbon, Tel: +351 218 851 024) Since Bruce seems to have taken in the entire Iberian peninsula on his trip last year, I was not about to quarrel when he raved about this place.  Turns out it is so well-known our cab driver said there 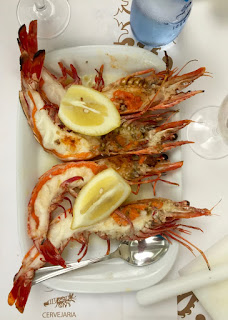 was no need to tell him the address as every cabbie in Lisbon knows it.  When we got to the restaurant there was a long line of people outside. Fortunately, Bruce had warned us of this daily occurrence and told us not to worry.  In a few minutes we were inside the densely tabled space.  And a few minutes after that we were ushered to our table on the second floor. Ramiro, as it is commonly called, is the home of the best Garlic shrimp I have ever tasted anywhere.  But we didn’t stop at the shrimp.  We dipped Portuguese rolls into the garlic butter wishing there was more.  We ate langoustes until we were stuffed.  And I think you can see why. 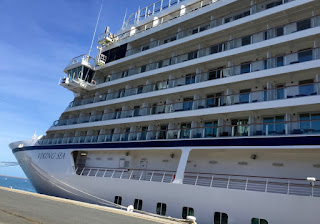 Friday morning dawned and our departure was top of mind. Viking had invited us to join the maiden voyage of the ship mid-stream. The voyage had started out 3 weeks ago in Istanbul, Turkey.  Our 6 Day 5 Night Press Tour featured 18 journalists and their “plus ones”, like Andrew, from as far away as New Zealand.   They were a great bunch of people whom we met up with nightly in the Explorer Lounge to exchange laughs and the day’s experiences.

We had a wonderful breakfast and returned to our room. Somehow, our plan to wear only the contents of our carry-on bags had been thwarted and all four of our suitcases had to be re-packed. As we were doing this, Joao called from the Front Desk to tell us that there was a wildcat strike of the city’s taxi drivers.  They’re protesting Uber’s move into Lisbon.  Fortunately, Joao, knowing we were boarding Viking Star that morning, had snagged a reservation with a limo company.  Public transportation isn’t really an option when you travel with 4 suitcases and hand luggage. So rather than arrive at the pier in a green and black cab, we arrived in style in our all-black Mercedes.

There in front of us was our first glimpse at Viking Sea.  Shimmering in the sunlight, the white ship is one impressive sight.  At 47,700 tons, the ship is hardly small.  But as the current crop of cruise ships have undergone enormous shifts in size, with her 930 passengers and 550 crew, Viking Ocean’s ships now qualify as mid-sized.  And while I had registered complete approval of Viking Star, Andrew had been skeptical.  Our only mutual cruise experiences had been on ships with just over 100 and just over 350 passengers.  I held my breath. 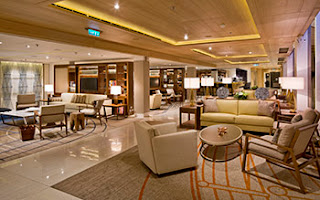 As it turned out, Andrew soon discovered that the design of these ships has meant they are completely unlike mega liners and far more like the small yacht-like ships we’d traveled on before.  Torstein Hagen, Viking’s Founder and Chairman, set out to create an atmosphere for his guests as if they were guests in his home. The results of this decision have meant the creation of seating groups that are positively living room like.  At every turn there are books of every description with an emphasis on the places the ship visits.  On every wall, there is a Scandinavian artist’s work.

Even the dining areas have been carved into sections that avoid any whiff of a banquet hall.  Since there’s no assigned seating, one can come and go as one pleases during the dinner hours.  For those who want company, tables for two provide plenty of opportunities for conversation among couples. For those who wish to dine a deux, there are tables for that too.

Then there are the two

specialty restaurants neither of which costs a nickel to go to.  This is counter to virtually every other cruise line, except for the very high end, all of which add a surcharge to dine in these on board venues.   Viking’s Manfredi’s already has a reputation as being one of the finest Italian restaurants at sea in a cluttered field. Italian food is as popular at sea as it is on land. So Crystal’s Prego, Princess’ Sabatini’s and Celebrity’s Tuscan Grill are given a real run for the money here as well as in every other dining spot aboard ship.  In fact, I challenge anyone to beat the food aboard anywhere aboard Viking.

The second specialty restaurant is the truly excellent “Chef’s Table”. Its revolving menus change every three days and present stunning course by course menus each night,  each course accompanied by complementary wines.
Next stop was our Penthouse Veranda Suite on deck 5. These staterooms measure 338square feet.

This particular category is 4th down from the top.  Once again, it is a superb example of Scandinavian craftsmanship, design and attention to detail.  A King Size bed at one end, a full sitting room at the other and finally a balcony with two chairs and a table round of the layout.  The heated bathroom floors add to the comfort as does the well-stocked mini-bar. And, in one of the very few differences between Star and Sea, the staterooms now include 3 UBS ports which connected our devices to the free WiFi that works everywhere on the ship. 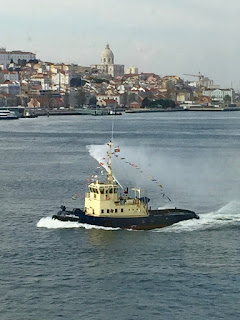 We spent the rest of the afternoon on board, unpacking and exploring until it was time to sail.   We went up top and watched as a fire boat gave the traditional salute to the maiden departure of Viking Sea from Lisbon for the first time.  Dinner followed at Manfredi’s.  Afterwards we had a nightcap meeting all our fellow journalists and their “plus ones” in the Explorer Lounge. The perfect beginning to our 5 day adventure on sea and on land. Next stop OPorto, Portugal and a very specal event.  Stay tuned.