Day Two. The Maiden Voyage continues….and we’re not even at sea yet!

Day Two dawned with a blue sky and Spring temperatures.  Breakfast at the Altis Avenida takes place in a stylish roost on the 7th floor of the hotel.   Considering that it’s all included in the rates, the buffet is substantial and includes all sorts of things that appeal to the hotel’s constituency of British and German visitors.  Cheeses and sausages, pastries and breads, eggs and juices and fruits were all there in abundance. Then we were off for a day we will long remember.
After breakfast we awaited the arrival of our chariot.  Through Viator.com, we’d booked one of the most highly rated tours on the site Lisbon by Beetle  https://www.lisbonbybeetle.com/en/ And it soon became apparent why.  Our white VW bug was captained by our Guide/Tour Director/Driver, Ricardo Teixeira. A native of the town we would visit, Cascais, up the coast from Lisbon, he could not have been a better choice for us.   He was full of every kind of information and very much tailored our trip to our interests.  Off we went to see a little more Lisbon before heading down the river toward the Sea.
In Belém, the first town outside the city, the mandatory visit to Lisbon’s Jeronomos Monastery was the first time we’d encountered crowds in Lisbon.  A sea of tourist buses disgorged a sea of humanity.The wait to get in was actually fairly short and we were richly rewarded with the interiors of this massive shrine to Portugal’s explorers.   Built in the 1500s, the interior is a masterpiece of carved stone, latticework ceilings and windows whose stained glass is divided by delicate mullions.   The tomb of arguably Portugal’s most famous explorer, Vasco de Gama, is a monument to this man’s voyages to India which made Lisbon a very wealthy city. 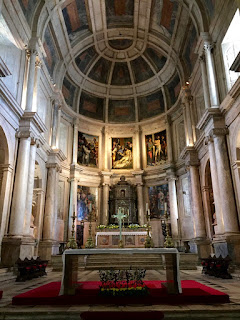 Next stop was an Andrew special.   All over Lisbon, all over Portugal, you will see hundreds upon hundreds of little tartlets covered with a browned topping that hides an egg custard.  Everywhere but in Belém, these are called Pastel de Nata. Here, where they were invented in the convent of the Monastario, they are called Pasteis de Belém. And this recipe dating from 1837 is now sold at a pastry shop just steps from the magnificent Monastery
If ever a place looked like a tourist trap, it is the Pasteis de Belém Bakery (at Rua de Belém No 84 to 92, Lisbon 1300-085 Tel +351 21 363 74 23. 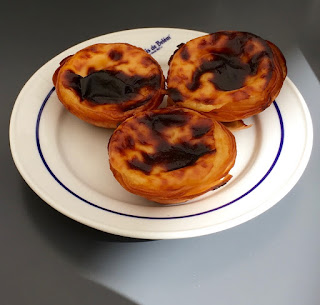 Since it is mentioned in every single guide book, we were slightly suspicious of its charms.  We were wrong. This immense place has room after room serving just the output of the shop.   50,000 Pasteis de Belém are made here and at a little over 1 Euro a piece, they represent one of the greatest food bargains ever.  Nowhere else will you find a fresher version.  We watched as they came out of the ovens by the dozen and we watched as locals left buying a dozen of the confection to take home.  When locals are this loyal, you’re not in a tourist trap, you’ve just discovered a local gem.
Back on the road we continued our journey to the sea. Broad stretches of beach were around every corner.  Surfers were in abundance.  Modern high rises crowded the hills until we came to the town of Cascais.   This wealthy resort town is a pleasure to visit.  It’s one of those towns that you’d like to come back to, perhaps to stay one of its classic hotels.  Lovely houses line its waterfront.  This is a working fishing village as well as an art’s center.  There is a whole restored fortress called Pestana Cidedela Cascais which is now used as studios for local artists and craftsmen, galleries to sell their work and a first class modernist hotel housed beneath the ancient façade. 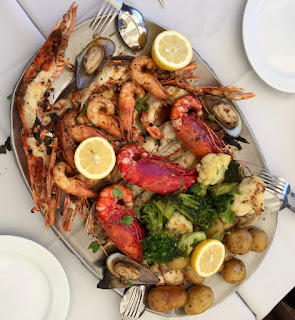 In planning this trip, I have sought travel advice from all over the place. So it was that our friend Kimberly, who currently lives in Lyon, France, gave us a recommendation from her friend Ana who is a native of Cascais, Portugal.  Ana steered us to  Restaurant Mar do Inferno (Av Rei Humberto II de Italia 241, Cascais 2750-800 Tel: +351 21 4832218.  Coincidentally, when I asked Ricardo to make reservations for us, it was the first place he too mentioned.  And for good reason. Overlooking the Boca do Inferno (The mouth of Hell, a local tourist attraction with surf crashing against its rocks) the restaurant has been in the hands of Maria de Lourdes Tirano and her two sons for 30 years.  A team of 25 produces some of the most spectacular seafood we’ve ever eaten.  The best idea here is to share one of the platters with the table.   While hardly inexpensive—ours ran to 135 Euros—this spectacular dish is worth every penny.
After lunch, we took off in the Beetle again hugging the coast and the wild Atlantic until we reached the westernmost point in Continental Europe.   The drive continued past beach after beach and then we turned inland and drove through a Eucalyptus forest.  Ricardo made sure we had cameras ready for our first glimpses of the palaces of Sintra, high in the hills above us.  There are five of these, none of which we visited, but instead saw from various angles, their   The town of Sintra is lovely. Despite the tidal wave of tourists and the dominance of Souvenir shops, it still retains a charm distinctly its own.   We wandered around and on our way of out of town stopped for one glorious shot of the two of us and the bug and the castles and the gardens of the Tivoli Palacio de Seteais, a restored 18th century Palace that is now a five star hotel and a great choice when we return to Sintra. Instead, we returned to Lisbon, which is surprisingly close via the freeways which match any in this country.
Back in Lisbon, we relaxed at the Altis Avenida before heading out to another incredible meal, one that I’ll tell you about in our next post.
Author: Monte Mathews
Filed Under: Cascais Portugal, Day Two Viking Sea Maiden Voyage, Lisbon by Beetle, Lisbon Portugal, Pasteis de Belem, Pestana Cidedela Cascais, Restaurant Mar do Inferno, Sintra Portugal, Viking Ocean Cruises
Day One: The Maiden Voyage of Viking Sea begins…
Day Three of the Maiden Voyage of Viking Sea….we finally cast off!

1 thought on “Day Two. The Maiden Voyage continues….and we’re not even at sea yet!”