Day One: The Maiden Voyage of Viking Sea begins… 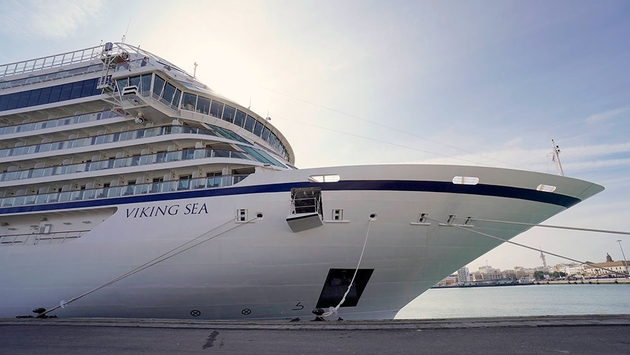 I was thrilled to be invited to participate in the Maiden Voyage of Viking Sea, sister ship to Viking Star, Viking Cruises ocean-going liners that have set a new standard in affordable luxury since their inception last year.   I was even more delighted when I convinced Andrew to join me and started a planning a trip that included time in Portugal before we embarked and time in Paris at the end of our wonderful voyage.  Last Fall, aboard Viking Star, I labored into the night to get my trip reports to you.  This time, I waited until I got home to take you along on what turned out to be one of our life’s best trips.  So here goes… 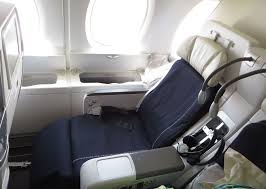 I have learned my lesson:  Always fly to the port of embarkation in advance.  First of all, you can deal with jet lag in a much more efficient way and secondly, fears of missing flights all but disappear. We flew to Lisbon, Portugal via Paris aboard Air France.  We chose to spring for Premium Economy, which came in at a somewhat hefty $750 Premium (Roundtrip) over standard Economy.  Believe me when I say it was a step up but not nearly as big a jump as we would take coming home in Air France Business Class.  There’s more legroom, a slightly wider seat and a minor improvement in catering. But the up charge may be worth the price simply for enabling the use of Sky Priority. These express lines speed you through the check-in process and through security getting you to the plane much faster than the snaking lines of those in Coach.  Our early evening departure put us at Charles De Gaulle at about one thirty a.m. our time.  Off to Lisbon we went on a connecting flight that landed us in the Portuguese capital before noon local time.

Lisbon was a complete surprise to us.  We both agreed that it might not have made the top 20 on our Bucket List.   Now, however, we would be sorry to have missed the city and, particularly, the surrounding countryside with its beaches and forests, castles and fortresses.   We chose our hotel, the Altis Avenida (Rua 1o de Dezembro, 120) for its location and its rates: Portugal is a very affordable country by our standards.  Our hotel room, with its balcony overlooking chic Avenida da Liberdade, was also quite a bargain coming in, with breakfast included, for a little over $200 a night.  The room was not large but it contained every possible amenity including a wonderful bathroom.   The staff cannot do enough for you and the location could not be more central. 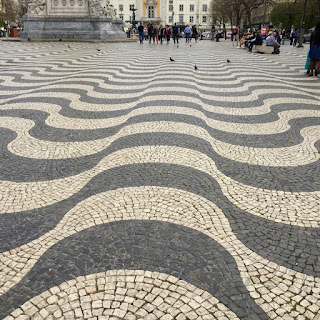 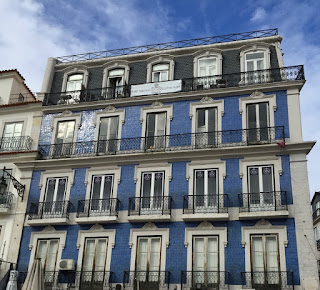 After getting settled in and taking catnaps, we headed to the neighboring Rossio Square and then south to the pedestrian-friendly shopping streets that stretch to the waterfront and Lisbon’s Tagus River.  In Lisbon, virtually every sidewalk is a mosaic.  Occasionally the patterns are interrupted by a store or bank name.   When you approach the river, the tile waves undulate like the water itself . Not to be outdone, many of the buildings are cloaked in tile of every pattern and description.  A taxi driver explained that using tile avoided having to repaint building façades in this salty-aired maritime climate. Instead the tile can just be washed down. To the left is a beautiful example of tiling this time, right next to our hotel and truly in Sky Blue as you can see.  We came to the  riverfront with its enormous and impressive Praco do Comércio and monuments to Portugal’s storied colonial past. Just down the way, we could see two large cruise ships docked where Viking Sea would be two days later.

Dinner that night was at a tiny restaurant in a side street up the hill from our Hotel in Lisbon’s Bairro Alto.  Lisbon is a sister city to San Francisco right down to its cable cars but particularly because the whole place appears to be built on hill after hill after hill.  Every time we suggested walking anywhere, Joao, at the hotel’s front desk, would admonish us to take a cab there and perhaps walk home.  Since cabs aren’t particularly expensive, those walks never happened.

Dinner was the first of many wonderful food surprises in Lisbon. 100 Manieras (at Rua Do Teixeira 35, Lisbon 1200-459 Tel +351 910307575) is helmed by a Serbian chef whose menus reflect his imaginative takes on traditional Portuguese dishes.  I will be writing a thorough report for The Daily Meal on this great find in Lisbon.  But for how, trust me, this should be high on your Lisbon list. Your can even make your reservations on Trip Advisor.
Back to the Altis Avenida and sleep in preparation for tomorrow’s amazing tour…in a restored VW Bug convertible.
Author: Monte Mathews
Filed Under: 100 Manieras-Lisbon, Air France Premium Economy Review, Cruise Travel, Cruise Travels, Day One: The Maiden Voyage of Viking Sea begins, Hotel Altis Avenida, Lisbon, Lisbon Portugal, Viking Ocean Cruises, Viking Sea
My review of Viking Star and her Food has just appeared on The Daily Meal. Enjoy!
Day Two. The Maiden Voyage continues….and we’re not even at sea yet!