Of all the foods we miss, simple Mexican food is high on our list.

We are spoiled in the city living just a block from a Tacqueria that turns out Mexican favorites so good and so inexpensive, I seldom bother making them at home.  But El Mitote, 208 Columbus Avenue, between 69th and 70th St. has been shuttered for weeks.  So we’ve made a couple of forays into replacing what we miss most from their menu.  This recipe fit the bill for several reasons.  I have never seen bacon incorporated into anything vaguely Mexican. And I had frozen a rotisserie chicken weeks ago and really wanted to use it.  I am so glad we did. Unexpected elements give this Pulled Chicken a terrific flavor profile.

Bacon gives a smokiness to the dish that’s enhanced by the Chipotle in Adobo.  The onion adds a sweetness. And the Goya Tomato sauce I used was seasoned with Garlic, Onion, and Cilantro to flavor every bite of the chicken.  I can’t resist cheese in any taco, tostado, tamale…come to think of it, anything Mexican– so a couple of tablespoons of a shredded cheese mixture labeled “Quesadilla” cheese were the first topping added directly to the warm tostada.  The store-bought coleslaw mixture adds the perfect jolt of acid (and saves time too). And sour-cream and creamy avocado were perfect finishing touches.

The Tostada is as versatile as any Taco and often topped with the very same things. The backbone of the Mexican diet was and continues to be the tortilla, made with corn. Little change has been made to its recipe. Corn kernels are cooked with lime to remove their husks and then the corn is ground on a stone slab.  The dough is formed into little round balls, patted out by hand into a thin round cake.  If it is wrapped in a corn husk, it becomes a tamale. The tortilla is imme nsely versatile. It is used for tacos and enchiladas and when cut into wedges it becomes an eating utensil. In the case of the tostada, the tortilla becomes a plate. Tostadas were traditionally made when tortillas were not fresh enough to be made into tacos, but fresh enough to be eaten as ‘toast’ which is their exact translation from Spanish to English.

How to make a great tostada.

Two ingredients are all it takes to make your own tostada.  Day-old Corn Tortillas are best since they have less moisture and will crisp up more easily.  The second is neutral vegetable oil, one with high smoking points such as safflower or avocado oil.  Stay away from Extra Virgin Olive Oil as it is too delicate an oil for this task.  You can deep fry the tortillas in 2 inches of oil on the stovetop. But I discovered that the oven produces a great tortilla without all that oil. You simply spray each side of the tortilla with cooking spray then cook them in the oven for all of 5 to 10 minutes.  The recipe follows the pulled pork recipe. And after both recipes, some other Mexican recipes to try. dir=”ltr” style=”text-align: left;” The Battle of Puebla        Once again we’re celebrating Cinco de Mayo with a tried and true favorite.  This post is the # 2 most viewed page in all of Chewing the Fat’s history.   This sensational recipe for Enchiladas […] 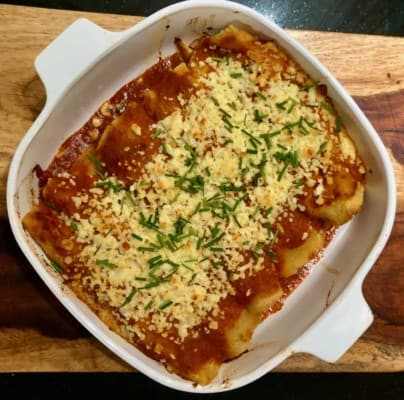