The Perfect Patty Melt and it’s most imperfect imitator, "The Midtown Melt" 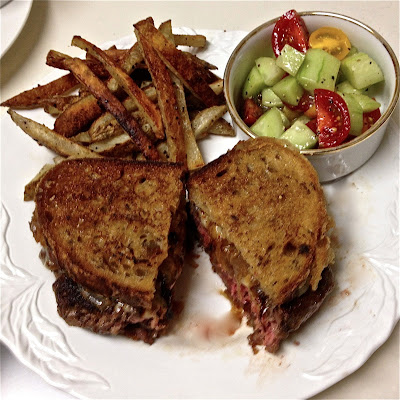 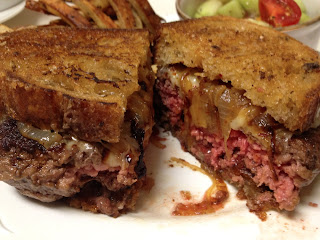 Last week, I had the strongest craving for a Patty Melt.  I confess that the Patty Melt is far and away my absolute favorite chopped meat sandwich. You must never call a Patty Melt a hamburger because to purists, the Patty Melt is emphatically not one.  To those afficianados like me, it has just four non-negotiable elements that set it apart from any hamburger or cheeseburger: A beef patty, rye bread, sautéed onions and Swiss cheese.  There can be no deviation from this ingredient list.  Furthermore, the patty must be oval to match the shape of the rye bread. The rye bread must be griddled, never toasted.  The onions must be sliced very thin and cooked until caramelized.  The cheese offers a little flexibility: it can be Swiss or Gruyere or a mixture of the two, grated or sliced.   What emerges from this recipe is decadently rich; the cheese permeating the bread and meat and that crisp, buttered rye bread is essential to the character of the dish, its aroma inextricably linked to the pleasure of the Patty Melt.  It’s completely decadent, there’s no denying it.  And there’s also no denying that I tried to resist it all last week.  I even went vegan. 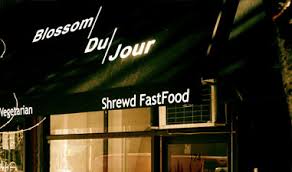 When the urge for the Patty Melt came over me, I tried to suppress it.  Red meat came up for another beating this week. An article in a British journal called “Nature Medicine” has piled on beef’s already questionable reputation.  I won’t go into all the depressing detail except to say that a chemical called Carnitine is heart disease’s newest culprit.  Carnitine is broken down by the bacteria in the gut, which then creates another substance that is found to clog arteries, raise cholesterol levels and with that,  the risk of heart disease.  The study stopped short of saying to cut out red meat altogether.  And there was even a suggestion that yogurt might be used as a pro-biotic counterpoint to Carnitine.  Still, the whole article gave me pause.  The Patty Melt urge came on at lunchtime. I thought I could sneak one in but didn’t know where.  Searching “Best Patty Melt in New York” yielded a big surprise.  The Burger joint Pattys came in first but close on their heals were rave reviews of something called a “Midtown Melt”. It seems that that particular sandwich was the product of a tiny little take out place called Blossom du Jour (BDJ for short) which happens to be at 165 Amsterdam Ave., not a block from our house.  I dutifully trundled over there.

The 2 counter employees could not have been nicer.  The place’s tagline is “Shrewd Fast Food”.  The whole menu consists entirely of items that are strictly vegetarian, if not vegan.  I am not vegetarian, and after my “Midtown Melt”, I realized I would never be vegan.  I know the cardinal rule: “if your great grandmother wouldn’t recognize it, don’t eat it…” Why then did I order something that listed as its contents ‘Cajun spiced seitan, v-cheese, and agave guacamole’?  I even added on ‘soy bacon’.  I hurried home with my purchase. I unwrapped the sandwich.  From the first bite, it was hideous.  Seitan, it turns out, is called Wheat Meat or Mock Duck and is apparently a well-known vegetarian meat substitute.  Only someone who has never eaten meat could possibly mistake it for the real thing. In texture, it’s somewhat similar to falafel.  it’s dry and tasteless.  V-Cheese is made from soy protein. To my way of thinking, you have to be an animal rights nut case to substitute the luscious taste of a great cheese for this poor excuse for the real thing.   And soy bacon?  The only thing that is the least bacon-y about it is its name.  And it ought to be ashamed for calling itself that. Flabby, strangely greasy, it added nothing to the “Midtown Melt” other than a $1.95 extra. I didn’t finish the sandwich.  I couldn’t wait to throw it away.  But I gained something from the experience. My quest for finding a substitute for a genuine Patty Melt led me triumphantly to…a genuine Patty Melt.

The original Patty Melt was created by a man named William “Tiny” Naylor.  In the 40s and 50s, he introduced it at his chain of California Coffee Shops called “Tiny Naylors”.  “Tiny” weighed in at 320 lbs. and stood 6 foot 4 inches tall.  He was also a giant in his industry, credited with inventing not just the Patty Melt but pop-up plate servers, refrigerated drawers and the concept of the open restaurant kitchen. Tiny dropped dead at age 68 in 1959.  Fortunately, his granddaughter, Jennifer, a well-known caterer in Malibu CA, kept his original recipe alive and that’s the one that I am sharing with you today. 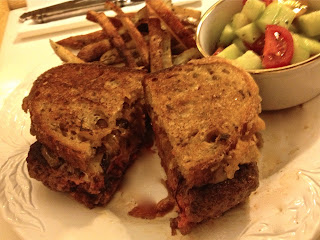 Patty Melts are not all that complicated to cook.  Follow these directions and you’re on your way.  The trick here is to work with two skillets.  One where you will cook the beef patty and the second where you will prepare the slices of cheese and onion covered rye bread. That way you avoid the perilous task of flipping the Patty Melt. Instead you simply put the beef patty in at the last minute and your Melt is made. To elevate the sandwich to celestial standards, find the best rye bread you can and use it.  Supermarket sliced rye hasn’t got a patch on the a loaf of seeded rye from an artisanal baker.   You have a little flexibility on the size and thickness of the patty.  Tiny’s recipe calls for 5 oz. of 80 percent lean, 20 percent fat ground chuck.  I went for 8 oz. per serving, largely because my Trader Joe’s beef comes packed in 1 lb. lots.  Remember not to handle the beef anymore than is necessary to form it into a oval patty.  Like meatloaf, the less you handle it, the better your results will be.  I served the patty melt with some Oven Fries and a Cucumber and Tomato salad.  The salad added some color to the plate and made us feel far less guilty for eating this amazingly satisfying once-in-a-very-long-while treat.  Here’s the recipe from Tiny Naylor himself. 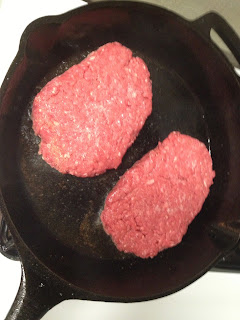 Form the beef into an oval patty slightly larger than the bread slices. Place on a rack and salt and pepper both sides heavily. Let rest.
Meanwhile, slice the onion thin. Heat some butter in a small skillet and sauté the onion over low heat until it’s very soft and turns brown about 20 minutes. Set aside.
Heat a cast iron skillet.
Heat a griddle or second large skillet over medium low heat. 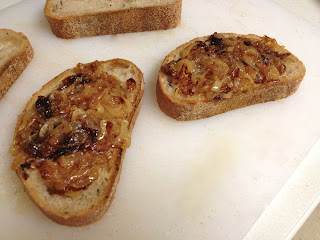 Butter one side of each slice of bread . Spread the onions over what will become the bottom piece of bread.  Distribute the cheese evenly over the four pieces of bread. Melt a tablespoon or two of butter on the griddle or in the skillet. Then lay the slices of bread onto the griddle or skillet.
While the bread begins to brown and the cheese melts, cook the hamburger patty however you like it. I think medium-rare best, but the patty melt is forgiving. 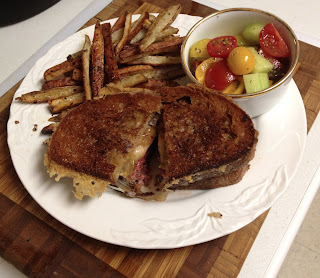 When the meat is done, remove it to the rack and let it rest for a couple of minutes. Place the patty on the slice of bread with onions and top with the other slice. If you’ve timed it right, the sandwich should need just another minute or so turn deep golden brown and become the perfect patty melt.  Serve at once.
Author: Monte Mathews
Filed Under: 30 Minute Dinners, Beef Dishes, Blossom du Jour, Comfort Food, Hamburgers, Jennifer Naylor, The Perfect Patty Melt, Tiny Naylor's Patty Melt, Vegan Recipes, Vegetarian Dishes
A Revelation: A Roast Beef that’s almost Filet-tender at about 1/5 the cost. And it cooks with almost no effort at all.
White Chicken Pot Pie inspired by Melissa Clark in The New York Times

4 thoughts on “The Perfect Patty Melt and it’s most imperfect imitator, "The Midtown Melt"”