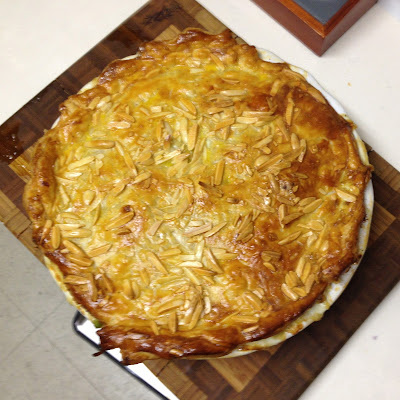 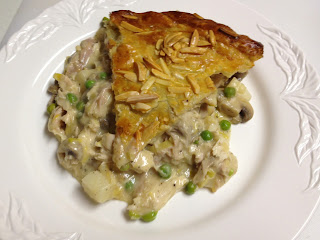 It’s awfully close to putting-away-the-pot-pie-recipes time.  But this one is so good, I hope it gets in under the wire and if not, do save it for a rainy day.  It’s that good.  The reason I rushed to make it was that I’d managed to end up with not one but two half-eaten rotisserie chickens. They’re perfect for a recipe calling for cooked chicken. In fact, they eliminate a whole step.  They are a stand-in for poached boneless, skinless chicken breasts so they cut cooking time down. While you don’t end up with the poaching liquid called for in the original recipe, Chicken Broth is a perfectly suitable substitution.

The genesis for this recipe was an article Melissa Clark wrote about the ‘white food’ diet her 4 year old daughter Dahlia rigidly clings to.  Dahlia likes carb-laden dishes like Mac and Cheese and this Chicken Pot Pie, which would be relentlessly white were it not for an optional cup of peas.  I latched onto the peas to make some gesture to Spring’s arrival.   Now Dahlia is not the first person to embrace white food.

Years ago, I read that Francoise de la Renta, former editor of French Vogue and wife of fashion designer Oscar, loved to serve completely white meals to her guests.  Since she was celebrated as one of the great home entertainers of all time, that certainly piqued my interest.  There was, however, no reason was given for this adoration of the monochromatic and most unfortunately, Mme de la Renta died of bone cancer in 1983.  So I fear we’ll never find out.  But I think she would have been so pleased with a pot pie filled with white vegetables—leeks, celery root, mushrooms, and potatoes– along with big chunks of chicken in a rich creamy sauce.  One final change to Melissa’s recipe:  She covered her pie with almond topped dumplings.  I went for Pepperidge Farm puff pasty instead, sprinkling the almonds over the entire top then brushing the whole thing with an egg wash.  It was magnificent if I do say so myself.  Here is the recipe: 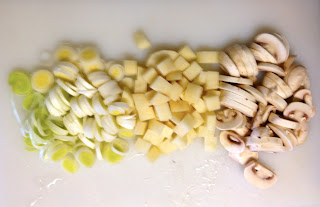 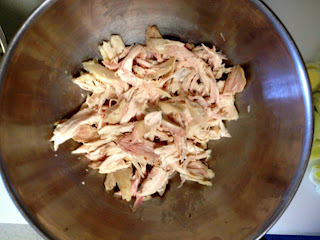 Take Puff Pastry sheet out of freezer and defrost on counter for 40 minutes.
Pre Heat oven to 400 degrees. Lightly grease a 9 inch ceramic pie pan with butter or non-stick spray. 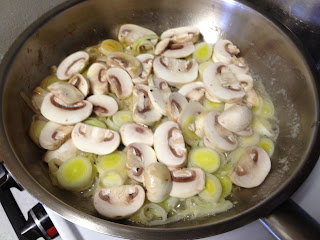 Melt 4 tablespoons butter in a large skillet over medium high heat. Add leeks and garlic and cook until softened, about 5 minutes. Add mushroom slices and let them release their liquid in about 5 minutes. 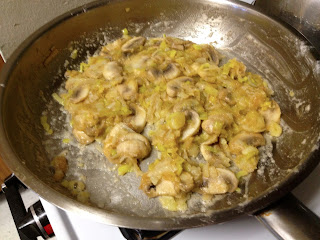 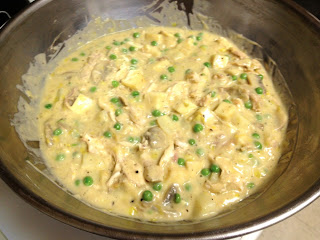 Slowly whisk in the stock and the cream. Season generously with at least  1 teaspoon salt and 1/2 teaspoon pepper. Bring mixture to a simmer. Stir in celery root and potato; simmer over low heat, stirring frequently, 10 minutes. Once sauce is thickened, stir in chicken, peas (if using) and lemon zest. 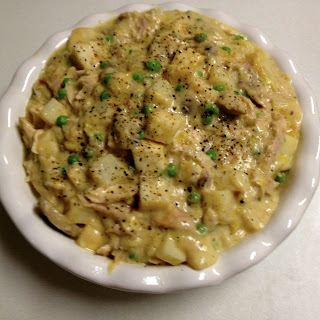 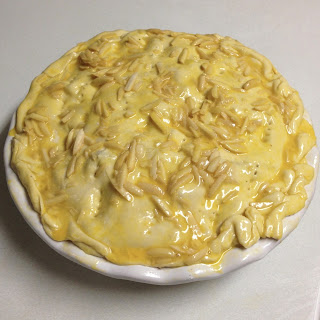 Put puff pastry sheet on floured surface.  Use a rolling pin to flatten it out slightly.  Then gently lift it over the pie plate. Crimp the edges following the contours of the pie plate.

Scatter the almond pieces over the top of the pastry.
With a pastry brush, cover the pastry and almonds with the egg wash. 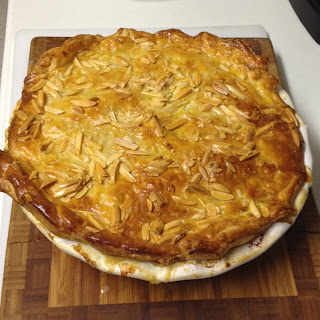 Transfer dish to oven; bake until top is golden brown and filling is bubbling, 35 to 45 minutes. Let cool 10 minutes before serving.