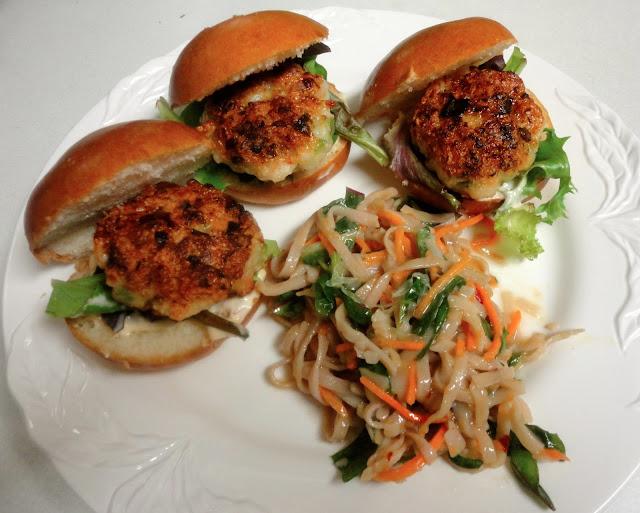 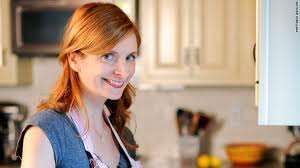 I don’t know when sliders took over the world but they’re everywhere. And while they may have started out as mini-hamburgers, now you can find them on all kinds of menus, stuffed with everything from Turkey to Texas barbecue.  Let’s face it, their size is ideal.  In one or two bites, you get the full-on slider experience.  They’re just the right size for children, for whom a full-sized burger is a challenge.  In today’s post, they’re made with crispy fried shrimp dipped into a salty lime sauce and then tucked into tiny brioche buns that have been slathered with an Asian inflected mayonaise. They’re a gift from the inventive Melissa Clark whose Wednesday food column in the New York Times is eagerly awaited in our house. This time, Melissa has gone East for her flavors.

There is a dish found in Vietnamese restaurants called Chao Tom.  It’s shrimp that is made into paste with traditional Viet Namese spices and then wrapped around sugar cane and fried. As Melissa Clark of the New York Times pointed out, sugar cane has yet to make its way into American supermarkets the way lemon grass has.  So Melissa contented herself with making the shrimp paste, cooking them in a little oil until they turn crisp and golden in no time.  Not that she didn’t experiment with the seasonings. Traditional Chao Tom could be described as bland.  In Melissa’s version the sauce, nuoc cham, gives the shrimp their heat and a lot of their taste.  Melissa spiced up the paste in a number of ways.  She added lemongrass, green chiles and scallions. She serves these for dinner on a bed of rice noodles liberally saucing the dish with nuoc cham.   But she began thinking how good they would be tucked into tiny brioche buns slathered with nuoc cham flavored mayonnaise.  I not only thought about it, I did it.  And the results were spectacular.
The whole dish comes together very quickly.A food processor makes that happen. If you are serving them to kids, turn down the heat by leaving out the serranos or jalapenos in the shrimp paste.  If you have a little extra time, after you’ve processed the paste, refrigerate it. This will make forming the shrimp cakes easier.  While the paste chills, you can make the Nuoc Cham and the Nuoc Cham mayonnaise.  Now go back to making the patties. Run your hands under cold water to make that easier. Fry them in a bit of oil and you’re done. Served with a side of cole slaw or rice slaw, these crunchy golden beauties are a perfect match to the softness of the Brioche buns.  Here is the recipe: 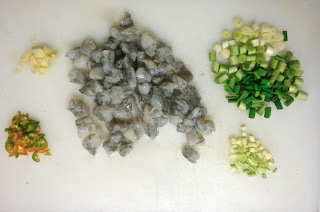 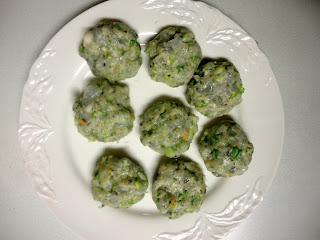