I love a little side of history when I am serving up a dish with roots as deep as Fried Green Tomatoes.  With the exception of grits and hominy, what’s more southern than this all-over crunchy firm tomato that’s been battered into a deep-fried delicacy?  Even though deep-frying makes almost everything taste better, this dish stands out.  The tartness of the tomato and the sweet cornmeal of the crust are a perfect combination–especially for tomato lovers like me. 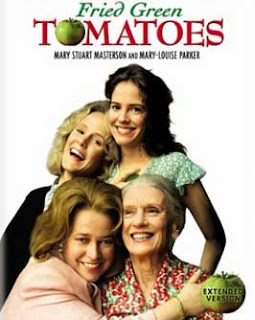 Of course, they’re southern to the core, aren’t they?  There was that whole movie “Fried Green Tomatoes at the Whistle Stop Café”.  Set in Alabama, this feel good film from 1991 was among the first ‘chick flicks’ and a huge hit.  I wanted to read up on the origin of the dish itself.   There on the website of the Smithsonian Institution, of all places, a woman named Lisa Bramen described her first encounters with Fried Green Tomatoes.  She too remembered the movie. In the late 1990s, she tasted her first Fried Green Tomato in New Orleans. So impressed was she that, on a southern road trip, she asked for them everywhere she went. Strangely, only once, in Memphis TN, did she encounter a pale imitation of what she had tasted in New Orleans.

It wasn’t until Lisa went to a county fair in Upstate New York that she came across a variation at a corn farmer’s food stand. She describes that dish as being “more like a corn fritter with a slice of green tomato nestled inside.”  The New York discovery led Lisa to another fork in the tomato.

According to Lisa, Robert F. Moss, a food historian and writer in South Carolina told her, “they entered the American culinary scene in the Northeast and Midwest, perhaps with a link to Jewish immigrants, and from there moved onto the menu of the home-economics school of cooking teachers who flourished in the United States in the early-to-mid 20th century.”  You’ve got to be kidding!  Fried Green Tomatoes are Jewish?  Moss backed up his claim by finding fried green tomato recipes in several Jewish and Midwestern cookbooks dating from the late 1800s.  Meanwhile, he found nothing in Southern cookbooks and hardly any in Southern newspapers.  It appears that the link to the south is from that single 1991 movie and little else!  Of course this makes all kinds of sense.  In the north, where the growing season is short and where a dip in temperature means having to find something to do with unripe tomatoes before frost kills them, why wouldn’t someone have invented the Fried Green Tomato?.
At this point I need to tell you one thing:  Andrew doesn’t dislike fried green tomatoes he hates fried green tomatoes.  That being said, I wanted him to love the things so much that when I saw a photo of a stack of them and a Martha Stewart recipe for making them, I had to try it.  The recipe uses crushed cornflakes to coat the tomatoes and there’s not a drop of oil in the whole dish.  Perhaps my healthier version would conquer Andrew’s aversion.

I spied some big beautiful green tomatoes in Bridgehampton and brought them home. It took me a couple of days to get to them during which time they ripened slightly losing some of their green but not their firmness. They were a cinch to put together.  Then you oven bake them for a little over a half hour.  The crunch factor is magnificent and I served them with a side of ranch dressing. I was in heaven.  Andrew was not.  He still didn’t like them one little bit. He might have eaten all of two bites.  Okay, I failed.  But when I thought about it, I realized, that’s more for me!   And with my leftover tomatoes, I made something equally satisfying.  I took the not fried green tomato, put it in the toaster oven topped with some bacon bits I had on hand.  Once the tomato and bacon had gotten really toasted, I spooned some ranch dressing over the top.  My, was it good! Here’s the recipe which, by the way, Martha calls ‘a healthier take on the quintessential Southern dish’.  Fooled you too, Martha?

2. Place flour, eggs and cornflakes in three separate shallow dishes and season
each with salt and pepper. Stir cayenne into flour mixture. 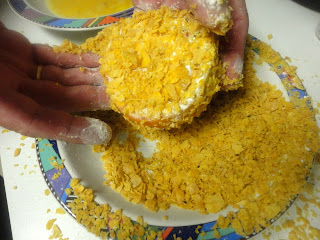 3. Coat each tomato slice first in flour, then eggs, then cornflakes pressing
lightly to adhere. 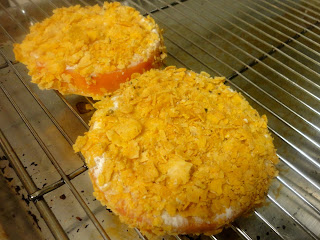 4. Arrange tomatoes in a single layer on racks and bake until deep golden brown, about 15 minutes, rotating the sheet halfway through. Serve with lemon wedges or ranch dressing.