Baked Penne with Sausage, Mozzarella and Tomatoes from the Galley of Gillian Duffy 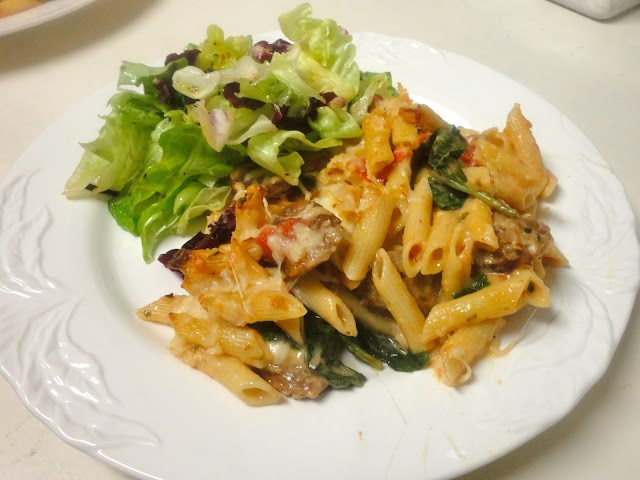 There are certain recipes I obsess over.  I have folder marked “Re-Visit” and in it there must be at least five recipes for baked pasta dishes.  They all are fundamentally the same.  The pasta is cooked and then a sauce is mixed into it, cheese is added to it and tops it and the whole thing goes into a hot oven for 15 or 10 minutes. In my imagination, it emerges with cheese bubbling up from under a crisp brown Parmesan crust.  The incredibly rich cream sauce coats the pasta which is laden with the flavor of sausage or meatballs, pork or beef.  That’s how I imagine it until reality takes over: Dried pasta sticks up out of a bare covering of cheese. Inside the sauce is non-existent and were it not for the meat, it would hardly be worth eating. This has been going on for years.

Then finally, in the most unimaginable place I found Baked Pasta Nirvana.  In this recipe, luscious ripe tomatoes in big chunks are mixed with slices of sweet Italian sausage.  The pasta, tomatoes and sausage come together in a creamy béchamel sauce.  And an entire layer of Mozzarella, hidden bang in the middle of the dish, pulls on your fork like mozzarella in a pizza commercial.  I did use the very last of the fresh tomatoes when I made this dish.  But I discovered that canned plum tomatoes, drained of their liquid and cut into large chunks are an admirable replacement and put this dish within reach year ‘round.  And where did this amazing dish come from?  Why, Departures magazine!

I don’t know whether you read Departures but it’s a super luxe magazine that gets sent as part of my American Express membership. It makes no bones about being upscale. It’s one of the few travel magazines that has no problem listing hotel room rates that start at $1545 a night.  It also features articles that are not exactly your standard travel features.  Take for instance, the creator of today’s recipe.  A writer named Gillian Duffy, she begins her piece on Mediterranean cooking as folllows:   “My husband and I bought our beloved Storm Eagle, a 40-foot Oyster ketch, in 1999 and, after sailing from New York to the Bahamas, shipped her from Port Everglades to Toulon in 2000. It was the beginning of a ten-year Mediterranean adventure: We spent two to three months each summer cruising a different place: Spain, France, Corsica, Sardinia, mainland Italy, Sicily, Croatia, Greece and Turkey, expanding our culinary horizons as I experimented with local ingredients for meals easily prepared on board.”  Good grief! The woman has tapped into my deepest desires: Two to three month cruises all over the Mediterranean on a private yacht!  And she can cook too!  What’s more, her galley must be minute.  It’s probably no bigger than our New York kitchen.  I could hardly wait to read on.

“One of our favorite fishing harbors in Sicily is Castellammare del Golfo, near Trapani. Though it’s normally a sleepy little port, one morning we awoke to commotion and saw traffic streaming to and from a beautiful old wooden schooner moored near the end of the harbor wall. When we went ashore for dinner that evening, we found every street crammed with enormous trucks, every restaurant overflowing with film people. Ocean’s Twelve had come to town. Fortunately, I had bought a basket of tomatoes the previous day from a farmer with a pickup truck laden with them. (Sicily has the best I’ve tasted anywhere.) Back at the Storm Eagle, I quickly assembled baked penne with sausage, mozzarella and the wonderful tomatoes. It was delicious, and we still enjoy it often, occasionally substituting leftover roast chicken for the sausage.”  To the picture perfect Sicilian harbor Gillian Duffy has added movie stars!  And not just any old movie stars but, from what I remember, George Clooney, Brad Pitt and Julia Roberts.   I don’t know how much Hollywood magic this conferred on Ms. Duffy’s Pasta Bake, but I had to try it.  It takes all of about an hour to get the whole thing on the table.  But with a green salad and a glass of wine, every minute is worth it. And think of the story you’ll be able to tell around the dinner table.  Here’s the recipe:

Recipe for Baked Penne with Sausage, Mozzarella and Tomatoes adapted from Gillian Duffy 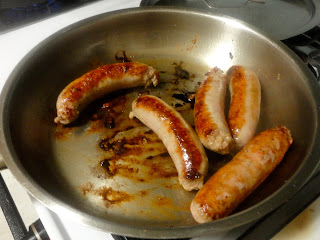 2. In a large skillet, heat the oil over medium. Add the sausages and cook for a few minutes until firm. Remove them from the pan and allow to cool. 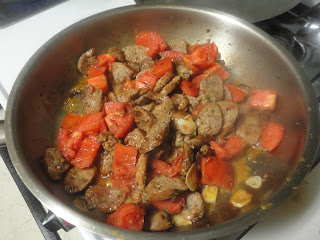 3. Cut them into thin slices, return to the skillet and cook until they start to brown. Add the garlic and sauté briefly, then add the tomatoes, pepper flakes and oregano and cook for a few minutes. Do not allow the tomatoes to break down; they should remain in chunks.

4. Make the béchamel: Melt the butter in a saucepan set over medium. Add the flour and stir until smooth. Cook for about 2 minutes before gradually whisking in the hot milk until the sauce is smooth. Continue cooking until it begins to thicken. Season to taste with salt and pepper. 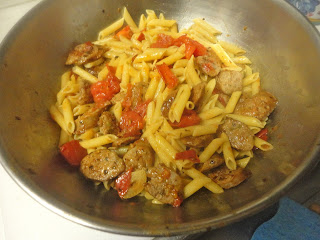 5. Add the béchamel to the sausages and tomatoes and stir until well combined. Stir in the basil.

6. Once the salted water reaches a boil, cook the penne until it is about a minute away from al dente. Drain well, reserving 1/2 cup of cooking water, add the pasta to the sausage-tomato sauce and mix well. If the mixture is dry, add some of the water 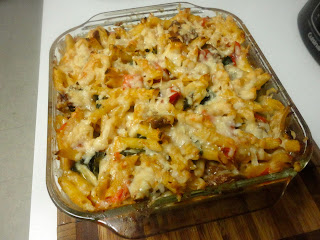 7. Transfer half of the pasta to a greased baking dish, layer with the mozzarella and cover with the remaining pasta. Sprinkle the Parmigiano-Reggiano over the top and place the dish on the oven’s upper rack. Bake for 15 to 20 minutes or until a light golden crust forms. Remove and let rest for 10 minutes before serving.

6 thoughts on “Baked Penne with Sausage, Mozzarella and Tomatoes from the Galley of Gillian Duffy”