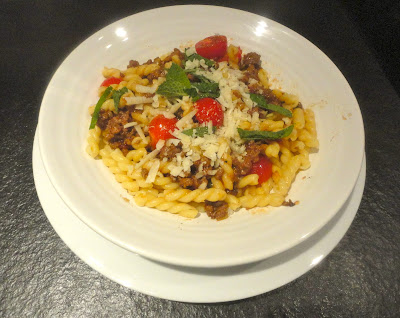 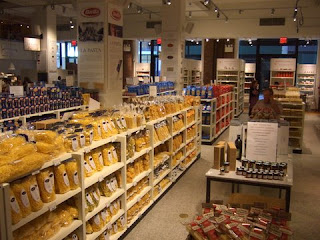 For all its popularity, ordinary supermarkets carry surprisingly few pasta shapes.  Granted, they do have a good representation of the types of pasta the home cook needs. But they never come close to the staggering number of varieties you’ll find at a pasta emporium like New York’s Eataly which is just across the street from Madison Square Park at 23rd and 5th Avenue.  The picture at left shows just one aisle of the store’s enormous pasta section!  How I took this picture with virtually no one in that aisle is something of a miracle.  Eataly, featured in this post (https://chewingthefat.us.com/2010/11/visit-to-eataly-yields-delicious-veal.html), celebrated its second anniversary just last week.  And there was a lot to celebrate. The 58,000 square foot store was on track to net $85 million in one year, which works out to $1700 a square foot!  That’s a lot of pasta!  And Eataly would be a good place look for the Strozzapreti pasta that Chef Michael Mina called for in his original recipe.  We were nowhere near Eataly when we decided to cook this meat-y pasta dish with its spicy overlay of cumin and fennel and red pepper.  So we substituted Gemelli, which are easy to find almost anywhere. They’re also an approved substitute for Strozzapreti, which translates, from Italian into English as “Priest Strangler”.  Gemelli means ‘twins’ in Italian, so much less violent than ‘priest strangler’ don’t you think? 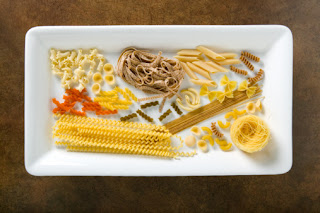 Whoever invented pasta must have had a fine time naming the various shapes.   They must have looked at the shape of the pasta and thought that one looks like a little ear (Orichiette).  That one looks like a butterfly (Farfalle) and that one looks like a Bridegroom (Ziti and I refuse to speculate why). It’s easy to see why Gemelli, which are two side-by-side spirals, are so named. But when you get to Strozzapreti which is shaped like a rolled towel, you have to ask yourself “Was this some sinister pasta out of The Borgias?”

At the end of the day, all pasta is chosen because it is the most appropriate being used. Spaghetti, still far and away the most popular, is best for light sauces.  When you heavy up on the meat, pasta with openings and ridges and bowls like Rigatoni, Penne and Orichiette are best.  Cream sauces are paired with ribbon like pastas like Fettucine and Pappardelle.   And both Strozzapreti and Gemelli have long ridges along their sides “which helps pick up more of the sauce” according to Michael Mina whose recipe we used.

Egyptian-born Chef Michael Mina is well known in his adopted hometown of San Francisco. And why wouldn’t he be? He was just 22 when he helped design and execute a restaurant from the ground up.  That restaurant, Aqua, opened in 1991 and Chef Mina’s reputation as a great innovator and chef was born.  After 20 years and a staggering 19 restaurants later, the chef returned to the site of his original Aqua and opened Michael Mina (252 California St. San Francisco CA Tel: (415) 397-9222.).  You know you’ve made it when your own name is the draw.  In his recipe for Lamb Ragu which came from Food and Wine Magazine, there’s a great balance between the richness of the slowly cooked meat sauce combined with the freshness of the cherry tomatoes, scallions and mint leaves that are added at the end of the preparation. And not to be forgotten is the grated cheese that used to finish the dish.  It ties the whole dish together using sheep’s milk cheese.  There’s not a lot of work here and the two hours and fifteen minutes it takes to make are mainly in the cooking time for the sauce.  Here’s the recipe: 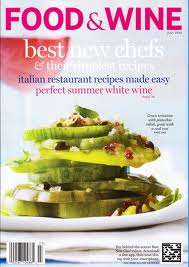 This is listed as being for 8 servings.  Make a batch and freeze it for later use if you’re serving fewer people. 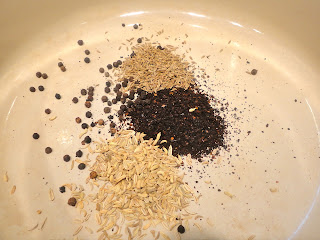 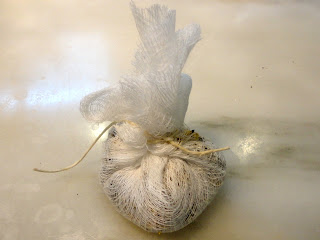 In a large enameled cast-iron casserole, combine the fennel, cumin, Aleppo pepper and peppercorns and cook over moderate heat until fragrant, 2 minutes. Let cool, then wrap in cheesecloth and tie into a bundle. 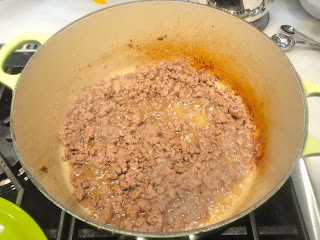 Add the oil to the casserole and heat. Add half of the lamb, season with salt and pepper and cook over high heat, breaking it up with a spoon, until browned, 3 minutes. With a slotted spoon, transfer the lamb to a bowl. Repeat with the remaining lamb. 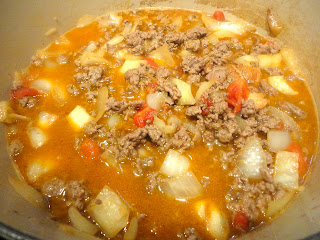 Pour off all but 2 tablespoons of the fat from the casserole. Add the garlic, onion and fennel and cook over moderate heat until softened, 8 minutes. Stir in the spice bundle, paprika, harissa, tomatoes and their liquid and the stock. Return the lamb and accumulated juices to the   casserole and bring to a simmer.

Cover the ragù and simmer over low heat for 45 minutes, stirring occasionally. Uncover and simmer until thickened, about 50 minutes longer. Discard the spice bundle and season the ragù with salt and pepper.

In a large pot of boiling salted water, cook the pasta until al dente. Drain and return to the pot. Add the ragù and stir. Fold in the cherry tomatoes, scallions and half of the mint. Season with salt and pepper; transfer to a large bowl. Top with the remaining mint and serve,passing the cheese at the table.
Author: Monte Mathews
Filed Under: Eataly, Food and Wine Magazine, Gemelli with Lamb Ragu, Mediterranean Dishes, Michael Mina, Pasta, Strozzapreti
Spaghettini with Shrimp, Tomatoes and Chile Crumbs From Chef Dan Kluger of ABC Kitchen
A Top 10 Winner! Linguine with Creamy Tomatoes and Shrimp