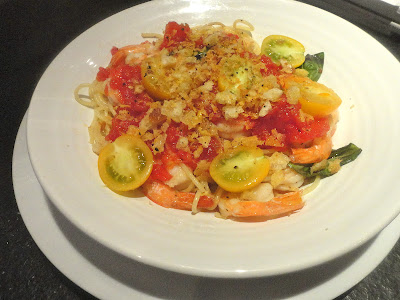 In July, Food & Wine magazine announced its picks in its annual “Best New Chefs” issue.  And it came as no surprise to us at all that the magazine had selected Chef Dan Kluger as one of the twelve.  If you’ve been lucky enough to snag a table at ABC Kitchen in the Manhattan store of the same name, you’ve experienced why.  The fresh flavors and unique spins on old favorites like Eggs Benedict have seduced us.  We’ll take a seat at the always-packed bar any chance we get.  The restaurant at 35 East 18th Street (Tel: 212-475-5829) is just two blocks north of the Union Square Greenmarket, the largest and arguably best Farmer’s Market in all of New York.  In fact, Chef Kluger met the man behind ABC Kitchen at the Market.  You may have heard of him: Jean-Georges Vongerichten.  According to the chef, the pair bonded at a stand called “Berried Treasures” and before he knew it, Chef Kluger had a new job heading up Jean-George’s Farm to Table Restaurant in the ABC store. When we were perusing Food & Wine, we couldn’t resist Chef Kluger’s contribution: A very beautiful bowl of pasta, a summer-y dish if there was one.  It was filled with glorious sunny golden cherry tomatoes in a fresh tomato sauce loaded with shrimp.  Topping this off was a sprinkling of breadcrumbs.  Closer inspection of the recipe only made us hungrier to make it: The breadcrumbs are spiced with red pepper and lemon zest.  Making them is about the only time- consuming part of the whole dish, but even then, you can have this dinner on the table in 45 minutes.  Here’s the recipe:
Spaghettini with Shrimp, Tomatoes and Chile Crumbs from Dan Kluger of ABC Kitchen  Serves 4. 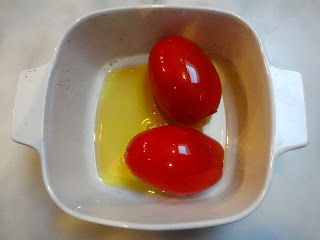 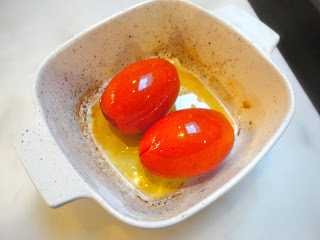 Preheat the oven to 450°. Put the plum tomatoes in a small baking dish and drizzle with the vinegar and 2 tablespoons of the olive oil. Roast for about 20 minutes, just until the skins loosen and the tomatoes are barely softened. Let cool slightly, then peel the tomatoes. Using the large holes on a box grater, grate the tomatoes back into the baking dish and stir. Season with salt and pepper. 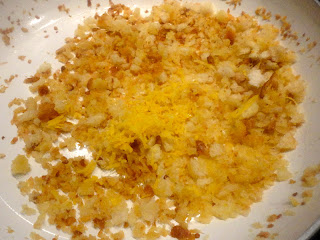 Meanwhile, heat 2 tablespoons of the olive oil in a large skillet. Add the bread crumbs and cook over moderately low heat, stirring, until golden and crisp, about 5 minutes. Stir in the lemon zest and a pinch of crushed red pepper and season with salt. Transfer the crumbs to a bowl and wipe out the skillet.
In a large pot of boiling salted water, cook the pasta until barely al dente. Drain the pasta, reserving 1/2 cup of the cooking water. Return the pasta to the pot and stir in 2 tablespoons of the olive oil. 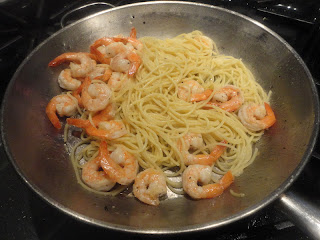 In the large skillet, heat the remaining 3 tablespoons of oil until shimmering. Season the shrimp with salt and a pinch of crushed red pepper and cook over high heat, tossing once or twice, until barely cooked, about 1 1/2 minutes. Add the basil and pasta along with the reserved pasta cooking water and cook, tossing, until the shrimp are white throughout and the pasta is coated in a light sauce, about 1 minute. 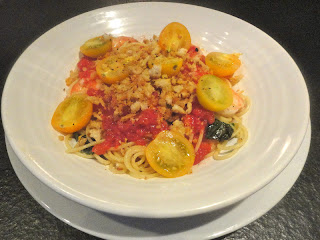 Transfer the pasta to bowls and scatter the cherry tomatoes all around. Top with the tomato sauce and bread crumbs. Serve right away.
MAKE AHEAD The tomato sauce and bread crumbs can be prepared up to 2 days ahead. Refrigerate the tomato sauce and store the bread crumbs in an airtight container at room temperature.
Author: Monte Mathews
Filed Under: Dan Kluger of ABC Kitchen, Food and Wine Magazine, Jean-Georges Vongerichten, Pasta Dishes, Shrimp, Spaghettini with Shrimp, Tomatoes and Chile Crumbs, Weeknight Dinners
Dubliner Chicken with Pasta, Pancetta and Arugula
Vinegar-Braised Chicken on a bed of Leeks and Peas adapted from Grace Parisi of Food and Wine Magazine with Heirloom Tomatoes and Burrata

5 thoughts on “Spaghettini with Shrimp, Tomatoes and Chile Crumbs From Chef Dan Kluger of ABC Kitchen”