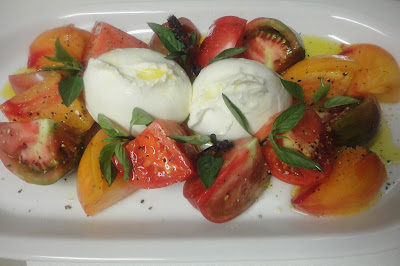 Last weekend, I wanted to start to move away from summer favorites and start enjoying some of the pleasures of fall. For me this means a great braise with a flavorful sauce. I found one in this amazingly light stew, a medley of leeks and the greenest of peas topped by crispy-skinned chicken cut up so everyone can choose their favorite pieces.   With this, I kept late summer on the table with an Heirloom Tomato and Burrata. They yielded a dinner that is so simple to make and takes so little time, Grace Parisi, Food and Wine’s Senior Recipe developer and one my culinary heroes, uses it for weeknight dinner parties. The chicken is browned, the sauce given the tang of a shot of white Balsamic vinegar and then enriched with crème fraiche. The tender leaks and sweet peas contrast subtly with the sauce. The whole effect is a wonderful cross between sweet and tender, tangy and creamy.   After 25 minutes in a hot oven, it’s ready to be served which I did straight from the pot. It’s a triumph of French bistro cooking and if anyone knows how to cook Chicken, it’s the French. But first, about that chicken and those heirloom tomatoes. 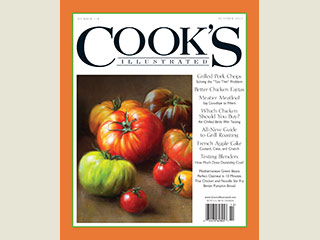 Cook’s Illustrated’s September/October 2012  edition did one of their exhaustive studies, this time about whole chickens.  You have to hand it to Lisa McManus, who wrote “The Whole Chicken Story”, for the depth she went to find the best of the brood.  Lisa starts with a staggering statistic.  The poultry industry in the US processes 8 billion chickens a year, that’s 84 lbs. of chicken per person.  But for all those chickens, there’s a huge difference in quality and a surprising lack of a difference in cost.  Cook’s Illustrated selected 8 brands of fresh supermarket chickens.  Breed was not a question as virtually every supermarket chicken in the country is a white-feathered Cornish Cross.  This variety matures in just 5 to 8 weeks and was bred to produce large breasts and short legs to get more white meat out of each bird.  For those of us who prefer dark meat, I guess we’re out of luck.
In our kitchen, we’ve long since given up anything that contains antibiotics but Lisa’s litany of other add-ins was equally off-putting. I’ll spare you the grim details but your can see for yourself in the magazine.  And I’ll also spare you from hearing about the birds’ demise, except to tell you that the winning brands not only won for taste, texture, moistness and overall appeal, they also got seals of approval for the way the Chickens were dispatched from this world into the next.  Both of the “highly recommended” brands  were “air chilled” which, among other things, means there’s no water added. This compares to the up to 14 percent of water absorbed by chickens that are not air-chilled. So if you care about price, how do you feel about paying for water ?

Air-chilled chicken is the way chicken is processed in Europe but it’s only gained popularity here relatively recently.  If you’ve ever had a roast chicken in France and marveled at how much better it tasted than any old Perdue, air-chilling is your answer.  (I will give my propers to Poulet de Bresse, the king of all French Chickens, but they only account for 1.4 million of the 830 million chickens raised in France every year.)
So who won the taste test?  “Highly Recommended” was a brand called Mary’s Free Range Air-Chilled Chicken also called Pitman’s, a western brand selling for $1.99 a lb.  As we move east of the Rockies, the price jumps for the next “Highly Recommended” Bell and Evans Air Chilled Premium Fresh Chicken.  The first time I bought it, it was only 2.59 a lb.  The second time, even though I was shopping at Whole Foods, it rang up at 2.69 a lb.  If you are looking to save money, I served 6 people for about $22.00 and had leftovers to boot.  Costco shoppers take note: In the “Recommended” column was Coleman Organic Whole Chicken but look for the air-chilled version or you end up with 5 percent water.  And I would have to say that the flavor description was nowhere near that of the first two “highly recommended” brands.  I promise I will eventually get to Grace’s Chicken recipe but first, the heirloom tomato debacle. 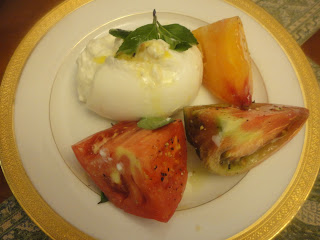 Now I know we live in one of the worlds’ most expensive places with an economy that relies for 12 months on three months of activity but… as I drove away from a farm stand in Bridgehampton looking at the run-down farmhouse, my heirloom tomatoes in my lap, I said to Andrew ‘Surely they could fix their house when 3 tomatoes cost $ 10.00”.  So imagine my surprise when the
Farmer’s Market just down from our apartment in New York had beautiful
heirlooms for $4.00 a lb. or $2.99 less than Bridgehampton where the field
was right behind the farm stand. And further imagine my surprise when Whole
Foods, known in some circles as “Whole Paycheck”, had them for $4.99 a lb.
And I could go on about the Burrata at $12.99 a “boule” in Bridgehampton but
$4.99 at Trader Joe’s but what’s the point? Just sit down and eat. On the
assumption that you can cut tomatoes into wedges, salt and pepper them and
arrange them next to some creamy-rich Burrata drizzled with Olive Oil, I’ll let
my picture stand in for a recipe. But for the Chicken, here goes:

Recipe for Vinegar-Braised Chicken on a bed of Leeks and Peas
from Grace Parisi in Food and Wine Magazine.

Salt
Freshly ground pepper
2 tablespoons unsalted butter
2 tablespoons extra-virgin olive oil
3 large leeks, halved lengthwise and cut into 1-inch pieces
1 cup low-sodium chicken broth
1/4 cup white balsamic vinegar
One 10-ounce package frozen baby peas, thawed
2 tbsp each chopped tarragon and parsley
1/2 cup crème fraîche or sour cream or Greek Yogurt
Preheat the oven to 425° and position a rack in the upper half. Cut your chicken into 8 pieces. This is a simple procedure which will save you money over buying a cut-up chicken. Here’s a video that will show you how https://www.youtube.com/watch?v=zW5BFvCmV7k.  Season the chicken generously with salt and pepper. 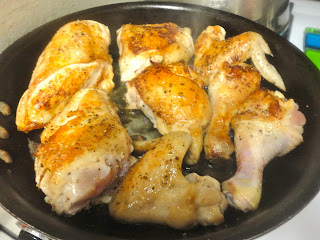 In a large nonstick ovenproof skillet, heat the butter and the oil. Add the chicken, skin side up, and cook over high heat until browned, 5 minutes. Turn and cook the chicken for 1 minute. Set the chicken aside. 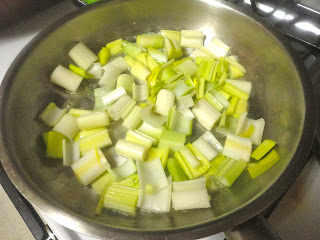 In the same skillet, cook the leeks over high heat    until just beginning to soften, about 2 minutes. 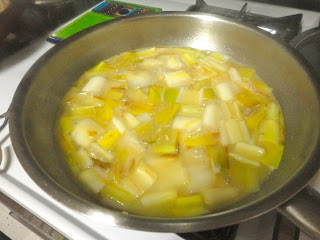 Add the broth and vinegar and bring to a
boil. Season with salt and pepper.

Set the chicken atop the leeks mixture, skin
side up; roast for about 25 minutes, until it
is cooked through. Remove the chicken and
set aside. 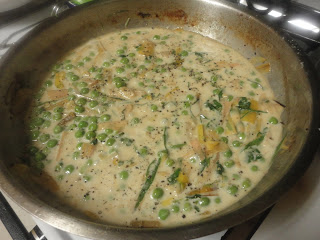 Place the skillet over a burner and boil over
high heat until the liquid is reduced by half,
about 5 minutes. Add the peas, herbs    and
crème fraîche and simmer until the sauce is
hot and slightly thickened, about 2 minutes.
Season with salt and pepper. 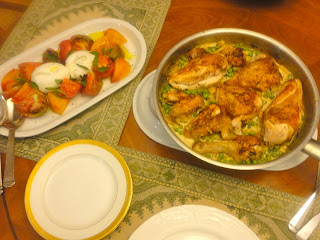 Return the chicken to the skillet and serve
at once. Serves 4.