A Visit to Eataly yields a delicious Veal Pasta Sauce 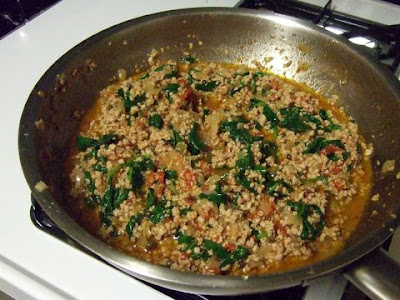 Eataly, in case you haven’t heard, is a 42,000 square foot grocery emporium that’s just opened at 200 Fifth Avenue.  And everything in it hails from or owes its existence to Italy from the on-premises cooking school to the rooftop beer garden.   The original Eataly opened in Turin in 2007.  At 50,000 square feet, the mother ship is even larger than this enormously impressive store in New York.  And Turin was followed by the opening of smaller branches in Bologna and Milano and even smaller ones in two locations in Japan.  The full name of the store is Eataly Alti Cibi which translates to “High Food”.  But think “Specialty Foods” and you get better idea of both the selection and the price points.

At its core, Eataly is truly an Italian market and just as in Italy, it is broken up into smaller ‘shopping areas” specializing in the most amazing array of Italian foods.  Its Italian-American owners are New York Food royalty. Partners Mario Batali. Joseph Bastianich and his mother, Lidia Bastianich have put together an incredible assortment of everything of Italian origin.  What I particularly liked was these are not supermarket staples and while they do have Spaghetti, you’ll also find dozens and dozens of pastas that are not so familiar in this country.  And then there are cheeses, a salumeria, a pastry shop where my luncheon companion blew through $31.00 buying six mouth-watering pastries, the over-the-top creations of pastry wonder boy, Luca Montersino.  And of course, there are tons of things to eat on the spot. There’s a pizza place, a pasta station, a Panini outpost and a most remarkable Roasted Meat section with Arista Pork and Porcini Rubbed Roast Beef all from Pat LaFrieda who is acknowledged to be the best meat purveyor in the City.   The seating for all these areas is casual and unreserved.  You can stand at a counter, sit at a bar, or take your seats at one of many tables.  There is one restaurant that takes reservations.  It’s called “Manzo”, (or Beef in Italian).  I headed straight there and snagged a table for lunch.   My friend and I were most impressed with the breadth of the wine list both in price and selection.  We had a wonderful Super Tuscan with lunch for $39.00. (By the way, there is a separate liquor store with an entrance on 23rd St. because, as you likely know, grocery stores cannot sell liquor or wine in New York State.) 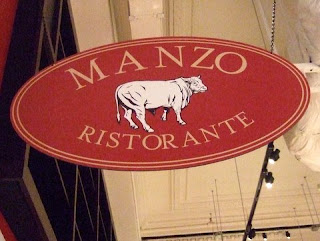 There have been lines out the door since the place opened.  And as my friend said: “Excuse me, but I don’t line up for a grocery store”.  I think our tactic worked much better:  I went at 11:00 before the lunchtime rush, reserved the lunch table at Manzo, and then went off surveying what to buy after lunch.  I ended up with Fresh Pappardelle, Agnoletti filled with pork and vegetables, salted capers, Italian couscous, a container of Straciatella,  a slab of perfectly roasted beef and a wonderful pound of LaFrieda’s ground veal. This I took home for 2 or three nights worth of dinners.
I made a wonderful Veal Pasta sauce with the capers, the last of two gorgeous tomatoes from Bridgehampton, some spinach, onions and for some heat, allesso peppers.  This was a perfectly delicious sauce for the pappardelle, the root of the name meaning ‘to gobble up’ which is exactly what we did.    It was all very easy and thanks to a reading of a Marcella Hazan recipe for a quick veal sauce, this one was easily on the table in 30 minutes.   Served with some heirloom tomatoes and straciatella, some crusty bread I had on hand, this was a wonderful dinner which I highly recommend.
Recipe for Veal Pasta Sauce with Tomatoes, Spinach, Capers and Onions 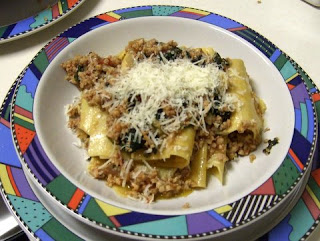 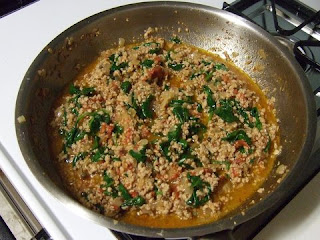 1. Heat the oil in a large saucepan. Add the chopped onion and cook until the onion is soft and golden, not brown.  Add the ground veal and break it up with a wooden spoon.  Cook until the veal has lost all its pinkish color.
2.  Add the ripe  tomatoes, the salted capers (with their salt), the Aleppo pepper flakes or the red pepper flakes and half the Parmigiano cheese. Cook about another 10 minutes. Stir in the spinach.  Season with salt and pepper.
3.  Cook the pappardelle very quickly in rapidly boiling salted water.  Drain, leaving some liquid in the noodle pot. Add the sauce, toss gently to coat,
top with the remaining Parmigiano and serve.  Serves 2.  Can easily be doubled  to serve more.
* Aleppo Peppers are Syrian red pepper flakes.  They are not dried like ordinary red pepper flakes but instead have a juicy quality that adds texture.  They can be ordered on-line at www.kalustyan.com
Author: Monte Mathews
Filed Under: Eataly, Italian food, Joe Bastianich, Mario Batali, Pasta Dishes, Veal, Veal Sauce
Quick Chicken Parmigiano
Baked Rigatoni with Eggplant and Sausage, Parmigiano Cheese Bread and a Honey and Pignoli Tart that’s to die for.