Days Eleven and Twelve of My Great Viking Adventure Part 2: Getting to know Viking Star and Corfu, I hardly knew you.

There is only one sea day on Viking Star’s 13 day Mediterranean Odyssey.  Since this is truly a dream boat, offering so much more than one could ever experience in two weeks, let alone a single day, this day is much anticipated.  Coming as is it does after long days touring Florence, Rome and Naples, the chance to sample the spa, the swimming pools and everything else on offer, is much appreciated.
One of the best things about Viking Star, compared to virtually every other ship I’ve sailed, is how spacious she is.  At first, her size seems daunting, especially to Viking River cruise veterans.  The 188 passenger Longships are beloved for their limited passenger capacity.  At 930 passengers and 47,000 tons, Viking Star is huge by comparison. But what is interesting is that all that extra size is actually extra room for every passenger. It starts with the staterooms, every single one of which has a balcony.  There are no interior cabins at all. In fact Viking Star carries half the passengers of identically sized cruise ships.  Small has become a relative term in cruising.  But overwhelmingly, ships are being built that are ridiculously large.  1800 passenger ships are considered mid-size.    Ships carrying 4000 passengers are commonplace.  They resemble giant apartment blocks with little or no connection to the sea. 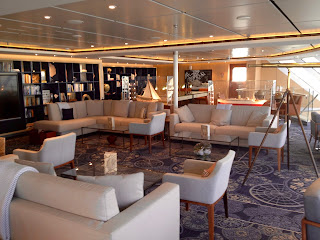 Viking Star is a ship, gloriously connected to the sea.  It is filled with Norway’s maritime heritage, a glorious collection of Nordic Art and Photography, and hundreds of books scattered on shelves throughout the ship, there for the borrowing.  There are infinite numbers of ‘cozy corners’.  Even the restaurants are designed to break down into smaller spaces.  There’s nothing approaching the banquet halls on the megaships.  The theater where live performances, talks take place and movies are shown, is the largest passenger space and even there, it is furnished with sofas, lounge chairs and cocktail tables.   As to the passenger complement, it is fair to say that the ship is large enough to find kindred spirits and also large enough to be able to avoid those who are not.

We reached our next port of call, Corfu, in the early morning.  We anchored rather than docked, a change in plans.  An announcement was made that due to a work stoppage, we would be tendered to shore.  I am afraid that set up what we would encounter on this our only stop in Greece.
I had been to Corfu some 20 years ago.  Then, I distinctly remembered a simply beautiful island with an elegance that was evident from the moment you stepped ashore.  There was an Arcaded Promenade in the center of town that was lined on one side by beautiful shops and on the other a public park.  Now, that Corfu is gone.  In its place is a rundown town, paint peeling, stores shuttered, staggering amounts of trash on the sides of the streets, forlorn apartments and abandoned construction sites.  Everywhere the signs of Greece’s financial plight are all too painful to see.   The only building that seemed remotely well cared for was the Hospital we passed on our way to the gastronomical portion of Viking’s “Countryside and Cuisine” shore excursion.
Once out in the countryside, we first visited Paleokastritsa, described as ‘a beautiful resort’.  The lyrics to “Another winter in a summer town” from “Grey Gardens” came to mind in this undistinguished place.  Our bus climbed a very narrow road on our way to our Tasting Menu held high on a hill called Bella Vista. This was the highlight of the trip, providing an overview of the landscape which allowed us to avoid the sad state of things below. 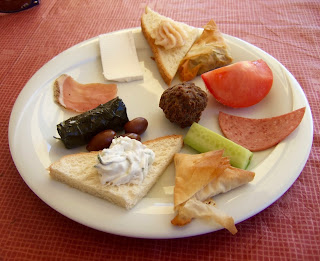 The “mezes” platter and glass of wine made our harrowing road trip all worthwhile. Each plate contained samples of Greek specialities like Taramosalata, Feta, Tsatsiki, Kalamata Olives, Ham, Salami, Spanikopita, Dolmades, Fried Meatballs served with a glass of Ouzo and of water to mix it with. 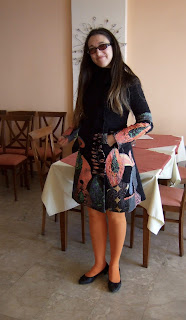 Our guide, a lovely girl in a chic ensemble did her best to explore all kinds of aspects of Greek heritage—its inventions including Democracy itself– with great pride. But I had to wonder what would possess the masses of unemployed and defeated people in Corfu to stage a work stoppage when 3 cruise ships made port here.  Back on the ship, my honeymooning friend, Demos, who is Greek American and speaks the language fluently, shared his disappointment in being ripped off by his cab driver whose initial estimate of 20 Euros for a tour escalated to 70 Euros before letting Demos and his bride exit his taxi. Corfu, I hardly knew you.
Author: Monte Mathews
Filed Under: Days Eleven and Twelve of My Great Viking Adventure Part 2: Getting to know Viking Star and Corfu, Viking Ocean Reviews, Viking Star Mediterranean Odyssey, Viking Star Reviews
Day Ten of My Great Viking Adventure Part 2: See Naples and Make Pizza.
Day Thirteen of My Great Viking Adventure Part 2: You say Croatia, I say Hrvatska