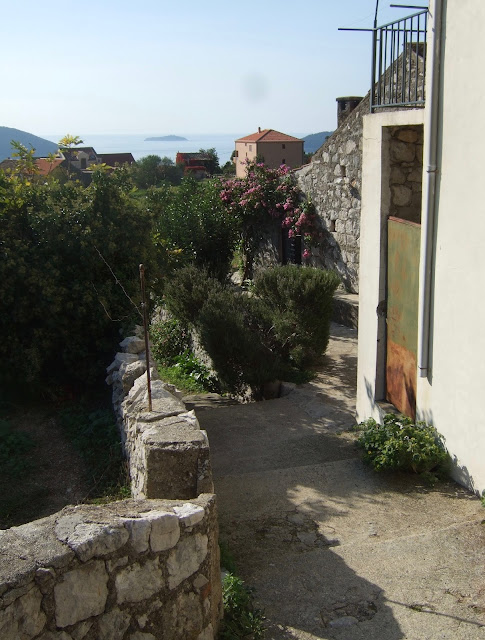 Of the six countries on Viking Star’s Mediterranean Odyssey, the only one I had never visited was Croatia, better known to its inhabitants as Hrvatska.   We made two stops there along the stretch of the country that makes up the Dalmatian Coast.  This where the Adriatic is at its cleanest, the water as pure and see-through as anywhere on earth.   It’s a rugged coast and because there are no waves to speak of, its rocky shore offers no sandy beaches, just miles of glorious views.   Our first stop there was the city of Dubrovnik.  All I knew of Dubrovnik was the lyric of a very old Liza Minelli song.  The song was about a New Yorker who went to Europe in search of love, or at least a husband.  She had not had a successful trip: “She bombed out in Brussells, in Mallorca and Rome till someone said “Try Dubrovnik, dear, before you go home”,  ‘Cause it’s the kind of town where you’re likely to fall and all the gente cognoscenti find the Balkans a ball…”.  Truth is, I never made it to Dubrovnik.
I had signed up for a Viking tour called “Dalmation Coast Wine and Food Tasting”.   And truly it was one of the highlights of the entire voyage.   People on Viking tend to break down into tour groups with similar interests.  I made friends with a Farmer from Wisconsin who took every action trip on the itinerary.  Joseph four-wheeled himself around the Mediterranean, walked walls around the old city of Dubrovnik, rock climbed in Italy.  Meanwhile I joined groups whose greatest physical activity was lifting glasses of wine, sometimes at absurd hours in the morning.  By that I mean, 10 a.m.
We drove up the breathtaking coast to a tiny village called Orašac.  There we were ushered into an ancient olive oil mill in use for 250 years.  An ancient horse powered the grinding stones that crushed the olives to extract their oil.   It was pointed out that the horse worked all of ten minutes a day, twenty if there were two tours. Apparently this agreed with him as he is now 30 years old.  He’s long since been replaced by a communal facility that does the whole job using the stainless steel equivalent of the old wooden machine. 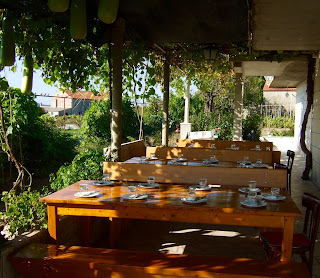 Upstairs we went where our host’s wife set out a wonderful array of cheeses and local ham, of olives and lettuces dressed in the couple’s own olive oil.  We sat under a vine covered pergola sipping the first wine of the day in this ravishing landscape where you can see the sea in the distance.
Next we moved on to the village of Ponikve.   There, a local wine cellar opened its doors to us.  The first sampling was not of wines but of liqueurs – an amazing array made of a

wide variety of local fruits like pomegranates, raspberries, strawberries.  There was even a killer grappa with an alcoholic content of 45 percent.   Then it was on to tasting three wines that are made there.  The white was fresh and lively.  The reds in two ages one of very recent vintage and the other aged. Oddly I preferred the young wine.  But as my friends know, the average lifespan of a bottle of wine in my possession is usually under an hour.

We moved from Ponikve to Ston, a town with a Medieval Wall that would Donald Trump proud.  It’s massive, stretching three miles over incredibly difficult terrain and it like so much we saw in Europe is in the midst of a renovation.

Ston is famous for more than the wall.   It is still the center of salt production, the oldest and biggest saltworks in the Mediterranean.   Since Croatian waters are highly salinized in the world, it stands to reason that it would create perfect salt. 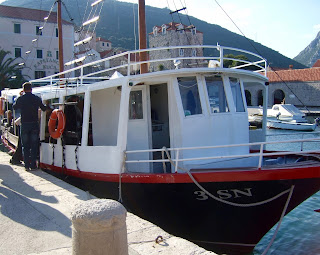 From there, we moved on to what makes Ston famous today: its oyster and mussel farms.  We boarded a small boat captained by one man and attended to by a waiter who offered us candied orange peel and nuts on the way to a platform sitting in the center of a large bay. The “Captain” then jumped aboard the platform and secured the boat. He then pulled a chain of oysters and a bag of mussels out of the water while
the waiter explained how the oysters are grown.  The Captain moved into high gear, cleaning both mussels and oysters and shucking them on the spot.  The waiter prepared plates made up of two oysters and a mussel and lemon sections.  There could be no fresher shellfish than this.  A huge fan of oysters, I devoured these perfect specimens.  The brine the oyster swam in was sensational, the mussel sweeter than any I have ever tasted.  Come to think of it, I don’t think I’ve ever eaten a raw mussel before.  Much to the delight of the oyster lovers among us, for some reason, some oysterphobes had come along for the ride; their oysters disappeared immediately  shared among we true believers.  Oh, and did I mention wine was also served with the bi-valves?
We returned to shore where we were ushered into lunch at a local restaurant where we ate pasta and shellfish risotto and of course, were plied with more wine.   Returning to the ship, we still had a couple of hours, which could, and likely should, have included the Viking-included shuttle bus to Dubrovnik itself.  But by that time, a nap sounded like a much better idea.  Dubrovnik will have to wait for a return visit.
Author: Monte Mathews
Filed Under: Day Thirteen of My Great Viking Adventure Part 2: You say Croatia, Viking Ocean Cruises, Viking Star Mediterranean Odyssey, Viking Star Reviews
Days Eleven and Twelve of My Great Viking Adventure Part 2: Getting to know Viking Star and Corfu, I hardly knew you.
Day Fourteen of My Great Viking Adventure Part 2: Split and the Cetina River