Day Fourteen of My Great Viking Adventure Part 2: Split and the Cetina River

When I was growing up there was a rivalry between my hometown of Montreal and the capital of English Canada, Toronto. This never made particular sense to me, as the argument that Toronto was inferior seemed to revolve solely around that city’s inability to drink alcoholic beverages on Sundays.  Or so my parents said.  It appears that in Croatia, a similar rivalry exists between Dubrovnik and Split, the two Dalmatian coast town Viking visits on its Mediterranean Odyssey. After considerable research, it seems to come down to this: Dubrovnik has altogether too many…cruise ship passengers.  Split on the other hand is ‘a real town’ where you can mingle freely with the locals.
Oddly, on our visit to Dubrovnik, Viking Star was the only cruise ship in town, whereas in Split we were one of two.  The other carried twice the number of passengers we did and they were much in evidence in beautiful downtown Split. Nevertheless, I loved Split.  Just keep in mind that I never actually saw Dubrovnik.
Split is dominated by an extraordinary structure.  The Roman Palace of the Emperor Diocletian

dominates the entire center of the town. One of the oldest cities in the Mediterranean, Split is considered to be 1700 years old to coincide with the building of the Palace.  However, archeologists discovered evidence of a Greek colony that thrived in the 4th century BC.  Like so many places in this part of the world, Split has had many masters.  It was Byzantine then became part of the Republic of Venice, until Venice fell to Napoleon when it was given to the Hapsburgs of Austro-Hungarian fame.  With the fall of that Empire, in 1918, the city became part of Yugoslavia.  During World War II it was annexed by Italy until that country fell to Germany.  It went back to Yugoslavia after the war and finally in 1991, Croatia seceded from Yugoslavia following the Croatian War of Independence.  Phew. 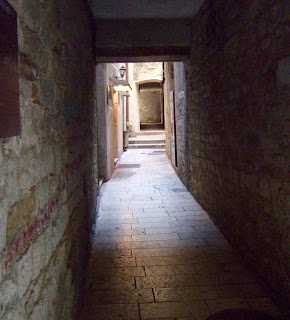 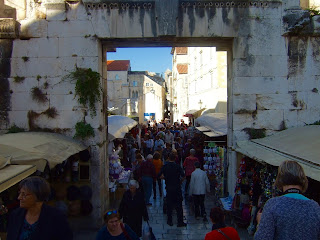 The net effect of all these many masters over Millennia is seen in the Palace. It   has been added to and restored and reconstructed and contains architectural elements from a dazzling number of periods and styles.   But this is no monument to yesterdays.  It is a vibrant hub of city life, its shops and restaurants a fascinating mix of ancient doorways and mantels and decorative styles with up to the minute offerings in their windows.   You could spend hours just walking it’s narrow passageways, a new discovery around each corner.  And just outside its walls is a vibrant marketplace filled with produce of every description and clothing and bric-a-brac and flowers and plants.  I wandered here for the prescribed period of personal time and then joined the others for the second part of our Viking excursion: to the Cetina River and a boat ride to a tavern on one of its banks.
Driving to the town of Omis, where the Cetina empties into the Adriatic, the sea is on one side and mountains on

the other.  It seems impossible to believe that any river could penetrate these massive walls of limestone but then you come to the Cetina.  We boarded boats for a thirty-minute ride up to Kaštel Slanica, a restaurant known for serving local specialties.  These include frogs, eels and trout from the river, and game—venison, boar and water hen– from the forests.  I was disappointed to see that all that was on offer to us was a platter of ham and cheese, some rather good bread and red or white wines.  And in keeping with all

my culinary activities this cruise, the wine was served at about 11:00 in the morning.  As we approach the shank end of the cruise, several fellow passengers wondered what on earth they were going to do when not served wine every morning before 11:00.

We returned to Split, passing through the ‘modern’ side of the city, which features numerous buildings that would be at home in any Soviet bloc country.  Our guide, a fabulous woman named Lela, was quick to point out that Yugoslavia, while Communist, was not aligned with the Soviets and in fact had a complete break with them in 1948. 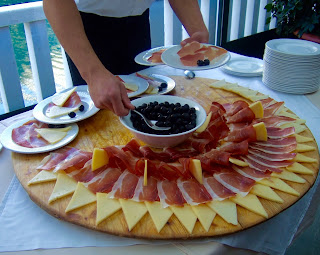