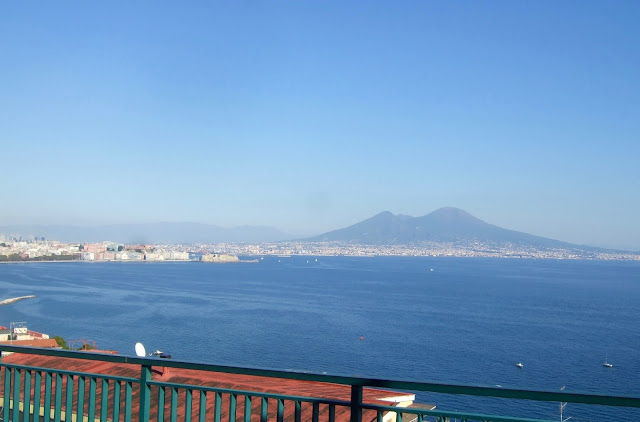 We sailed into Naples, mid-morning.  There is a famous quote about Naples…”Vide Napoli e Mori” which translates to “See Naples and Die”.  The phrase is not attributed to any author and is meant to suggest that once you’ve beheld the beauties of Naples, there’s nothing left to live for.   This is probably one of the most puzzling phrases on earth because the first view of Naples is nothing to write home about.  Some wag has suggested that to see Naples from the deck of a ship is to die of disappointment.  There’s an ancient city and just outside it, a group of skyscrapers that could be anywhere on earth.  But they do come as quite a shock.  And disembarking doesn’t exactly change one’s mind about seeing Naples and dying.

At the moment, the city is in a state of being completely dug up. The subway system is being ‘improved’ and gaping holes appear everywhere from the windows of Viking’s tour buses.  Naples, like almost all of Italy, has terrible problems the minute it puts a spade in its earth.  Under it lies the history of the country, dating back as it does over 2000 years to Roman times. And in Naples it goes back even further: Naples was first called Neo Polis, the Greek name for the city they founded in the 6th century BC.  Now, each disturbance unearths ruins upon ruins in the layers of history of this, the 3rd largest city in Italy.  Sometimes these discoveries lead to the complete cessation of all activity. This is the sense I got as our “Piazzas and Pizza” tour got underway–that the city was pretty well paralyzed. We seemed to travel in endless circles trying to avoid the massive pits that pockmark the center of Napoli.

Viking offers an amazingly varied group of optional excursions on its Naples stop.  You can tour Pompeii or Herculaneum, or take a 4 x 4 and drive up Mount Vesuvius.  You can combine a visit to Sorrento with one to Pompeii.  You can go all the way down the coast to the Amalfi Drive or stop in Positano.  But since my focus is food, I choose “Piazzas and Pizzas”. And for some reason, I decided that I really should have some lunch before setting out for my one o’clock tour. Which I dutifully did, despite the fact that I’d had waffles about two hours earlier.

Well-fed, I was ready to roll in more ways that one.  As one goes further south in the country, Italy gets more and more Italian.   The accent grows stronger, the ‘r’s roll off the tongue more freely, the sun more intense, the colors more faded.  That is how Naples feels.  As we drove ever upward the Posillipo Hill, overlooking the Bay and the city, the views became more spectacular.  As with virtually all Viking tours, ours included free time in the center of town.  There ‘the honeymooners’, Stacy and Demos, the ship’s youngest passengers by decades, and I immediately headed to Gambrinus, a grand eatery right on Piazza Plebiscito. It had  been highly recommended by Ezio and Edoardo the day before in Rome. There, two hours after lunch, we indulged in the house specialty:  A spectacular focaccia sandwich of mozzarella and tomatoes which we devoured oblivious to the fact that we were about to make pizza within the hour.  We also shared an incredible chocolate canoli just to tide us over.

Pizza was invented in Naples in 1830.  Some wonderful chef dreamed up the idea of making what, in my opinion, is the perfect food. The crisp crust, the sweetness of tomato sauce, the melted goodness of mozzarella and the choice of dozens of toppings make for a meal that has protein, carbohydrates, dairy and vegetables all in one.

We arrived at our Pizza class at a place called Ciro a Santa Lucia where everything had been set up for a quick lesson in pizza making.  The dough had been made, the toppings

set out and volunteers selected from the group to make pizza.  Stacy went first, adeptly making her pizza which was then thrust into a 400 degrees C. (750 degrees F.) for literally two minutes.  I was far less agile than my friend but nevertheless created something that I consumed in a flash.  There were individual pizzas for every single one of us on the tour and I saw virtually no leftovers.  Everyone devoured their pizza.  We stumbled back onto the bus for the short ride back to the ship.  It was about 5:15. Getting off the bus, I heard one of my fellow pizza makers ask his wife : What time is dinner?  “6 o’clock” came the answer.  Really? I waited till at least 8:15.