For years, I’ve actively avoided going anywhere near Rome.  Despite travel to Italy over the years, I wanted to lock Rome in my memory: To make Rome eternally the way it was in 1968 when I was 21 years old and had spent one of what turned out to be, the best years of my life there.

I had gone to school there starting in the Fall of 1967, one of 28 students enrolled in the Rhode Island School of Design European Honors Program that year.

Practically as soon as we arrived in Italy, we boarded buses and headed out of Rome to some much smaller towns where we were to have our “home stays” learning the language before we got to down to real business in Rome.  We drew and we sketched and we photographed.  But mostly what we did was to be absorbed into the marvelous families the school had found who took us in, fed us unimaginable quantities of Italian home cooking and treated us as one of their own. I lucked out.  I was sent along with about 6 other kids to the Umbrian town of Assisi and a family called Minciotti. 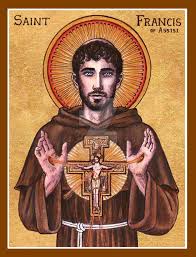 Assisi is of course the birthplace of St. Francis, born Giovanni di Pietro di Bernardone in 1181, nicknamed Francesco.  He was a son of a wealthy silk merchant and apparently quite a practitioner of the high life as a young man.  Then, as a soldier, he had a vision that brought him back from Rome to Assisi.  He begged in the streets and preached there too eventually founding not one, but two orders including the Sisters of Clare, now a cloistered order still headquartered in Assisi.  He received the stigmata, in which he manifested the wounds of Christ’s passion and died two years later at the age of 44.  Although he is known for his love of animals and the environment, his true love was spreading the gospel and the Eucharist.  He, along with Catherine of Siena, is one of the two Patron Saints of Italy.  Small wonder, he infuses Assisi with an aura of gentleness and kindness that was apparent every day I spent there. His memory has been resurrected by the current Pope, who calls himself “Francis”.  And Assisi has now become a pilgrimage for an new generation of the faithful, especially, according the Minciottis, for his fellow Argentines.
The Italian language came to me easily, mostly I think because I grew up in Montreal studying, if not speaking, French.  I think my Italian family imagined their two children, Sofia, a year older than I was and Edoardo, several years younger, would learn English from me.  This was not to be the case.  I plowed through the language, often making up words or at least using something I’d heard.  The most famous of these was when I thought I was asking to smell something at the dinner table, but instead asked if I could stink it up.  The family just roared with laughter.  But they always did.  They were a large extended family with an expansive Grandmother who lived with them and several servants who were as close to the family, and treated as such, as could be.
After the year was over and I returned to the States, I kept in touch to an extent but, in all honesty, my life took turns that I wasn’t sure the deeply Catholic Minciottis would approve of.  When I divorced, I wrote them of a death of my marriage, in Italian so bad, they thought my wife had died.   It was hard to be honest about what I was going through.  They had their own problems, and heartaches and eventually their Mother Victoria died.  The letters stopped, both mine and theirs. But we both wondered whatever had happened to each other.
Then along came Facebook and, with it, a page from my Alma Mater, The European Honors Program in Rome.  I cheerfully posted a message wishing the current occupants of Palazzo Cenci, Piazza Cenci 56, a year as filled with as many good things as I had experienced.  And Presto!  The current Italian Director of the Program, Ezio Genovesi, is an Assisi native and a great friend of my ‘brother’ Edoardo, who is now a successful and well-respected surgeon in Umbria.  The house we lived in is now a Hotel called Palazzo Minciotti. Edoardo occupies the top floors with his wife and daughter.
And my sister Sofia, long married to the beau I knew who lived in Rome, Mario La Ferla, lives in Milan and spends summers at Palazzo Minciotti.  Edoardo and I and Sofia and I contacted each other and once this journey was on the books, we made plans to meet.
And so it was that Edoardo and Ezio and I met at the same restaurant where, so many years ago, dinner cost the equivalent of $3.00 and a carafe of wine set us back $1.00.  I jumped off the Viking “Highlights of Rome” bus, walked through the Piazza Navona for the hundredth time and into
the Campo dei Fiori, the market where we went daily to pick out our lunch.  After a wonderful reunion and my first really Roman Carbonara in 47 years, I went back to school.  Was it changed? Oh my yes.  The area around the school has undergone the kind of change New Yorkers know well.  Campo dei Fiori is Soho now. The butchers and bakers and candlestick makers have been replaced by the Burberrys and Ted Bakers and high-end shoe makers.
The school has been sandblasted and students no longer come for a year, opting like the rest of the world for a semester abroad.  And there, in the same studio I shared with a now-departed school chum, amidst the memories of the best teachers I ever had, also long gone, I cried.  But I know one thing.  I’ll always have Rome. And now, I have Edoardo and Sofia and Mario and a new generation of La Ferla Minciottis to hold dear and visit forever in Rome or anywhere else…which I did.  But you’ll have to wait until I get to Milano to hear the rest of the story.
Author: Monte Mathews
Filed Under: Day Nine of My Grear Viking Adventure Part 2: Roma. A Sentimental Journey, RISD EHP, Viking Ocean Cruises, Viking Star, Viking Star Mediterranean Odyssey, Viking Star Reviews
Day Eight on My Great Viking Adventure Part 2: Florence, David and the Selfie Stick
Day Ten of My Great Viking Adventure Part 2: See Naples and Make Pizza.