Pappardelle with Creamy Leeks and Bacon 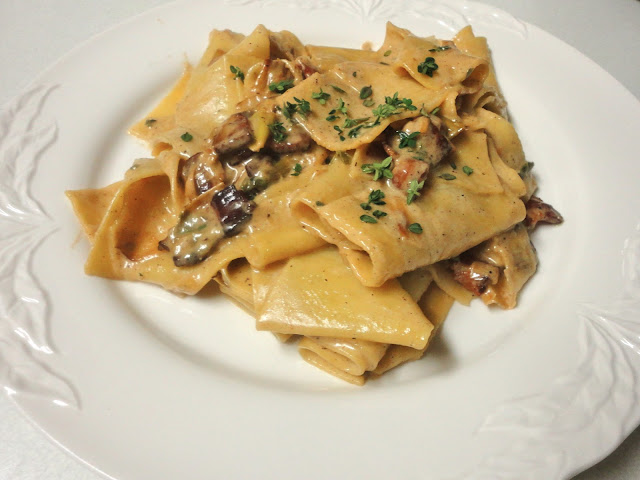 There’s almost no end to what people are putting on pasta these days. The most recent issue of Bon Appetit has 7 entirely new takes on pasta sauces and a couple of pastas that are new to me:  Ditalini, a tubular pasta that translates to “little fingers” and Fiorentini, named for Florence, a spiral shaped paste as elegant as the city itself.  All the recipes are from Sara Jenkins, best known for her tiny East Village hole in the wall “Porchetta” (110 E. 7th Street NYC Tel: 212 777 2151).  There the star of the show is Chef Jenkins melt-in-your-mouth slow roasted pork on artisanal bread. It’s a stand-up kind of place, great for a midday pig-out. ( I generally go there on the sly, shamed that anyone might witness my fondness for pork fat.) 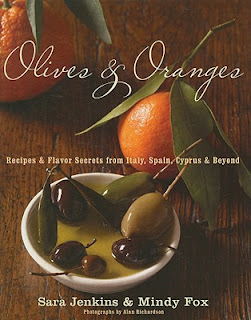 In between pig roasts, the Chef managed to write a cookbook called “Olives and Oranges: Recipes and Flavor Secrets from Italy, Spain, Cyprus, and Beyond “by Sara Jenkinsand Mindy Fox (Houghton Mifflin 2008).   But it was at her next venture, a restaurant called Porsena, down the street from Porchetta at 21 East 7th St. (Tel: 212 228 4913), that Ms. Jenkins devoted herself to pasta.  And it you can’t get there yourself, this month’s copy of Bon Appetit will take you there. 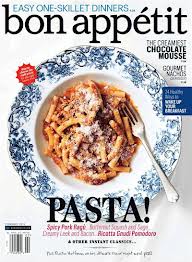 Of all 7 pastas, I chose the Pappardelle with Creamy Leeks and Bacon.  Right at the start you should know you can substitute linguine if pappardelle are nowhere to be found.   The recipe says that it’s a twist on Carbonara, the famous Roman specialty that uses eggs, cheese, guanciale or pancetta and turns them into oceans of creamy sauce.   The Creamy Leeks and Bacon are almost as sinful. The dish is so rich portion control is a must.  In Italy, where pasta is a separate course and precedes the entrée, the serving size would be half of what you end up with here.  So go easy, make sure that you add enough pasta water so there’s a true creamy sauce before you stir in the pasta.   Then you’ll end up with the sweetness of the leeks, the smokiness of the bacon and the creaminess of the sauce coating the pasta whether pappardelle or linguine.  This is so good! 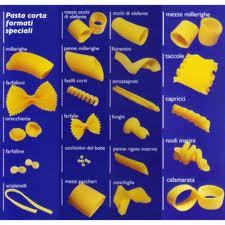 On our way to the recipe, I wanted to share 4 tips that Chef Jenkins laid out to make your pasta perfect from now on.  This applies to all pasta and not specifically to pappardelle.  Here they are:

2.   Don’t skimp on the salt.  Chef Jenkins uses a terrifying ¼ cup of kosher salt per 6 quarts of water.  Since the pasta water is a key ingredient in making the sauce, the salted water is the basis for a lot of the flavor.

3.   Al Dente or ‘to the tooth’ is everyone’s ideal of when pasta is done.  There was a tale I once heard about a Neapolitan chef who would fling his cooked pasta against a brick wall. If it stuck, it meant it was overcooked.  Chef Jenkins says she trusts the cooking times on pasta packages but nevertheless starts testing about 3 minutes a head of time.  She says: “You can always cook it longer. But you can never go back”.  Supposedly the Neapolitan I spoke about committed suicide when too many nights went by with pasta sticking to the wall.

4.   Use the pasta water in your sauce.   As it cooks, the pasta release starch into the water.  This is Chef Jenkins’ key to a well-seasoned bowl of pasta.  Before you drain the pasta, lade out two cups of the cooking liquid and put aside.  You may not have to use anything like that amount but even a splash or two will help your sauce emulsify when you add your pasta to the sauce.

Now, are you ready for the recipe?  Here it is:

Recipe for Pappardelle with Creamy Leeks and Bacon 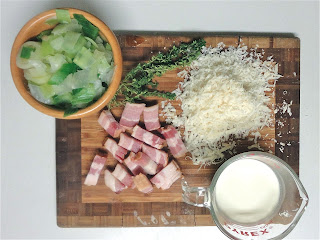 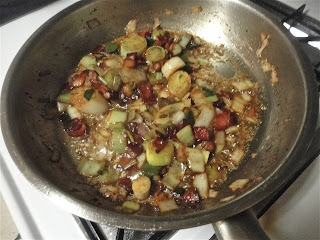 Heat oil and butter in a large heavy pot over medium heat. Add bacon and cook, stirring often, until fat is rendered and bacon is crisp, 5-8 minutes. Add leeks and season with salt. Increase heat to medium-high and cook, stirring often, until leeks begin to brown, 5-8 minutes. Add cream, thyme, and 1/2 cup water. Bring to a boil, reduce heat, and simmer, stirring occasionally, until sauce is thickened and coats the back of a spoon, 5-8 minutes.
Meanwhile, cook pasta in a large pot of boiling salted water, stirring occasionally, until al dente. Drain pasta, reserving 2 cups pasta cooking liquid. 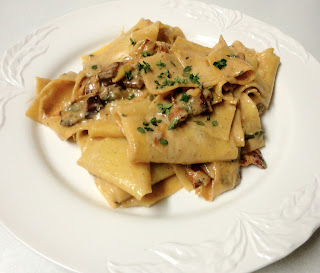 1 thought on “Pappardelle with Creamy Leeks and Bacon”