Rigatoni with Hot Sausage and Fennel from Gourmet Magazine 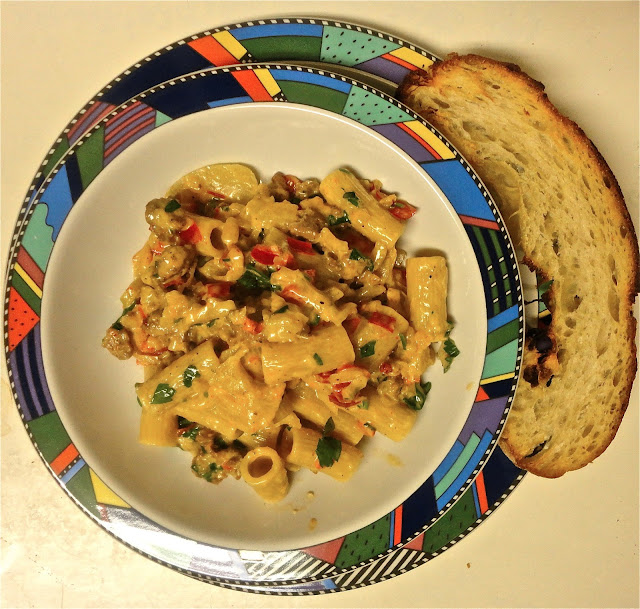 How we still miss Gourmet!  Some of my earliest childhood memories are listening to my father reading aloud as he and my mother ate vicariously at Gourmet’s table.  The magazine first appeared in 1941.  The United States entered the war shortly thereafter.  Subscribers were urged to keep their issues until the war ended. That way Gourmet’s readers could try the recipes without wartime rationing. While devoted to food and wine, Gourmet also covered “Good Living” which meant that many of my parent’s annual vacations were built around Gourmet’s take on Madrid or Lisbon or London. As to its recipes, while the country wallowed in dishes involving cans of cream of mushroom soup, Gourmet took the high road. I can still hear my father reading, on the subject of Peking Duck, “first wring the bird by its neck until it is dead”.  Gourmet was nothing if not complete.  In many ways, Gourmet was well ahead of its time.  This was driven home to me with this take on pasta from 1990.

I’d just written that today’s chefs were having a field day with fresh takes on pasta sauce.  Up popped this 23- year-old recipe that could have come from this month’s Bon Appetit.  What is so modern about this?  Well, it may be hard to remember but fennel was not a supermarket staple when this was written.  And it’s equally easy to forget that America, although the inventor of Spaghetti and Meatballs, hadn’t strayed far from traditional red sauce Italian. Penne alla Vodka only arrived at Orsini’s in New York in the 1970s.  So today’s post brings us a cream sauce with a fairly obscure vegetable and  completely devoid of tomatoes. It’s very luscious and decadently rich but don’t call out the calorie cops or the fat police.  It’s only got ¼ cup of cream spread out over 4 portions.  And speaking of portions, the recipe calls for ½ lb of pasta. I’ve discovered that the ideal measure of any tubular pasta, or for that matter any pasta that will fit in one, is 1 cup dry measure per single serving.  I can’t tell you how often sauce has disappeared when a great volume of pasta is cooked. So stick to my 1 cup 1 person rule and you will have plenty of sauce and have cut down on the carbs at the same time.  Here’s the recipe.

Recipe for Rigatoni with Hot Italian Sausage and Fennel from Gourmet 1990
Serves 4. Start to finish 30 minutes. 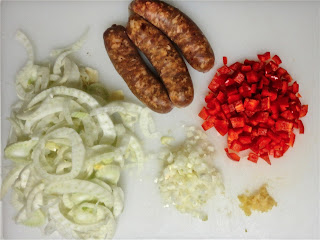 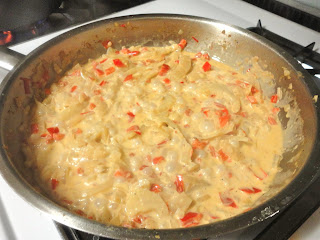 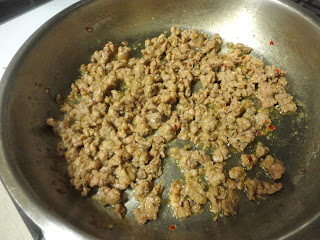 In a heavy skillet cook the sausage over moderate heat, stirring and breaking up any lumps, until it is cooked through and transfer it with a slotted spoon to paper towels to drain. 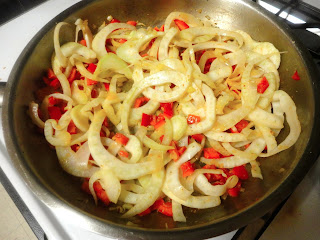 Add the oil to the skillet and in it cook the onion and the garlic over moderately low heat, stirring, until the onion is softened. Add the bell pepper and the fennel and cook the mixture over moderate heat, stirring occasionally, for 5 minutes, or until the bell pepper and fennel are softened.
Add the wine and broth, bring the liquid to a boil, and simmer the mixture, covered, for 5 minutes. Add the cream and boil the mixture until it is thickened slightly and reduced by about one third. In a kettle of boiling salted water cook the rigatoni per the package instructions until it is al dente and drain it well. Stir into the fennel mixture, the parsley, the sausage, and salt and pepper to taste and in a bowl toss the sauce with the rigatoni and the Parmesan. Serve at once. 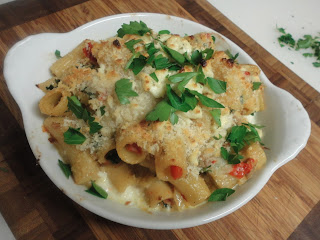 And it’s even delicious the next day.  Simply put a serving in a gratin dish, top with cheese, run under the broiler for 3 or 4 minutes and presto, a gorgeous individual pasta.