Beef Pot Roast with Mushrooms and a Balsamic Sauce 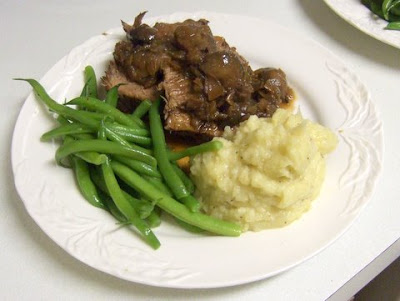 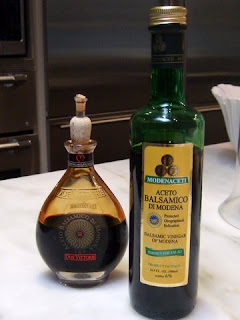 Let’s be honest:  Balsamic Vinegar has taken the place of red sauce Italian in terms of being found almost too often.   It’s unfortunate too that America’s love affair with this ingredient is so completely antithetical to the way it’s used in Italy.  There, it is used sparingly—one or two drops at a time and never to replace vinegar but to supplement it.  And real Balsamic is aged for years and when finally consumed, it is a deliciously thick liquid which you only need drops of.   I was fortunate enough to be given a magnificently authentic Balsamic vinegar at the Fine Foods Show in June.  As you can see in the photo, it even looks precious and has about as much to do with its supermarket counterpoint as red wine does to vinegar. We drizzled that balsamic on hard cheese and it was out of this world.

Of course, the real thing does not come cheap.  I remember reading that Victor Hazan, husband of Marcella, used to pay more for his balsamic in his student days than he did for wine.   I’ve also read that you can buy the cheap stuff and boil it down until it is vaguely close to the consistency of the expensive stuff.   I’ve tried that but there still was no comparison to the real thing.  So you may wonder why I am posting this recipe at all:  Because it makes a genuinely delicious Pot Roast with lots of a very flavorful sauce.  And let’s face it, Pot Roast is all about the sauce because without it, it’s the grayest piece of meat to ever hit a plate.  And this recipe also made use of some mushrooms that I’d overlooked for a week in the Sub Zero and really wanted to use. 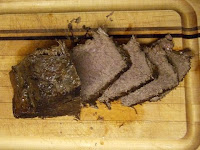 To my mind, Pot Roast is pure comfort food.  It’s reliably easy to braise, and once the chopping and browning are achieved, it just sits in the oven until the appointed time and emerges to fill the kitchen with a wonderful smell.   It’s also very inexpensive—at least this one was as the  Bottom Round I used was on sale for $1.79 a lb.  What other kind of roast can you put on the table for a little over $6.00?   Pared with some skinny green beans and creamy mashed Yukon Gold potatoes, it was perfect Sunday Night supper to bring home from the beach.  Here’s the recipe which I hunted down on the Internet.  It’s from a home cook named Tanya who lives in Las Vegas.  Thank you Tanya!

Recipe for Beef Pot Roast with Mushrooms and a Balsamic Sauce 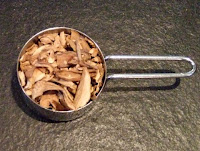 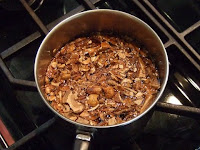 2.   Combine the porcini and broth in small saucepan and bring to boil. Remove from heat and let stand for 10 minutes. Remove porcini with a slotted spoon, coarsely chop and set aside. Strain the broth through a fine sieve and set aside. 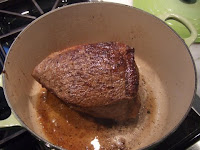 3.   Rub the meat with the salt and pepper. Heat 2 tablespoons of the oil in a roasting pan or large Dutch oven over medium high heat. Cook the meat until well-browned, about 2 to 3 minutes per side. Transfer meat to a plate; set aside. 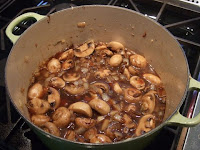 4.   Reduce heat to medium; add the remaining oil, onions, cremini mushrooms, garlic and rosemary to the pan and cook stirring frequently, until mushrooms and onions are tender, about 5 to 7 minutes. Return the meat to the pot and add the porcini, strained broth, vinegar and sugar. Over high heat, bring to a boil. Cover. Transfer to oven and cook until the meat is tender, about 2 1/2 to 3 hours.

5.   Transfer meat to a cutting board and cover with foil to keep warm. With a slotted spoon, remove vegetables and reserve. Place the pan over high heat and boil the cooking liquid until reduced by half, about 15 minutes. Season with salt and pepper to taste. 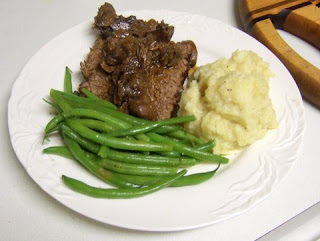 6.   To serve, cut the roast across the grain into thin slices. Place them on a platter with the vegetables and spoon on some of the sauce.