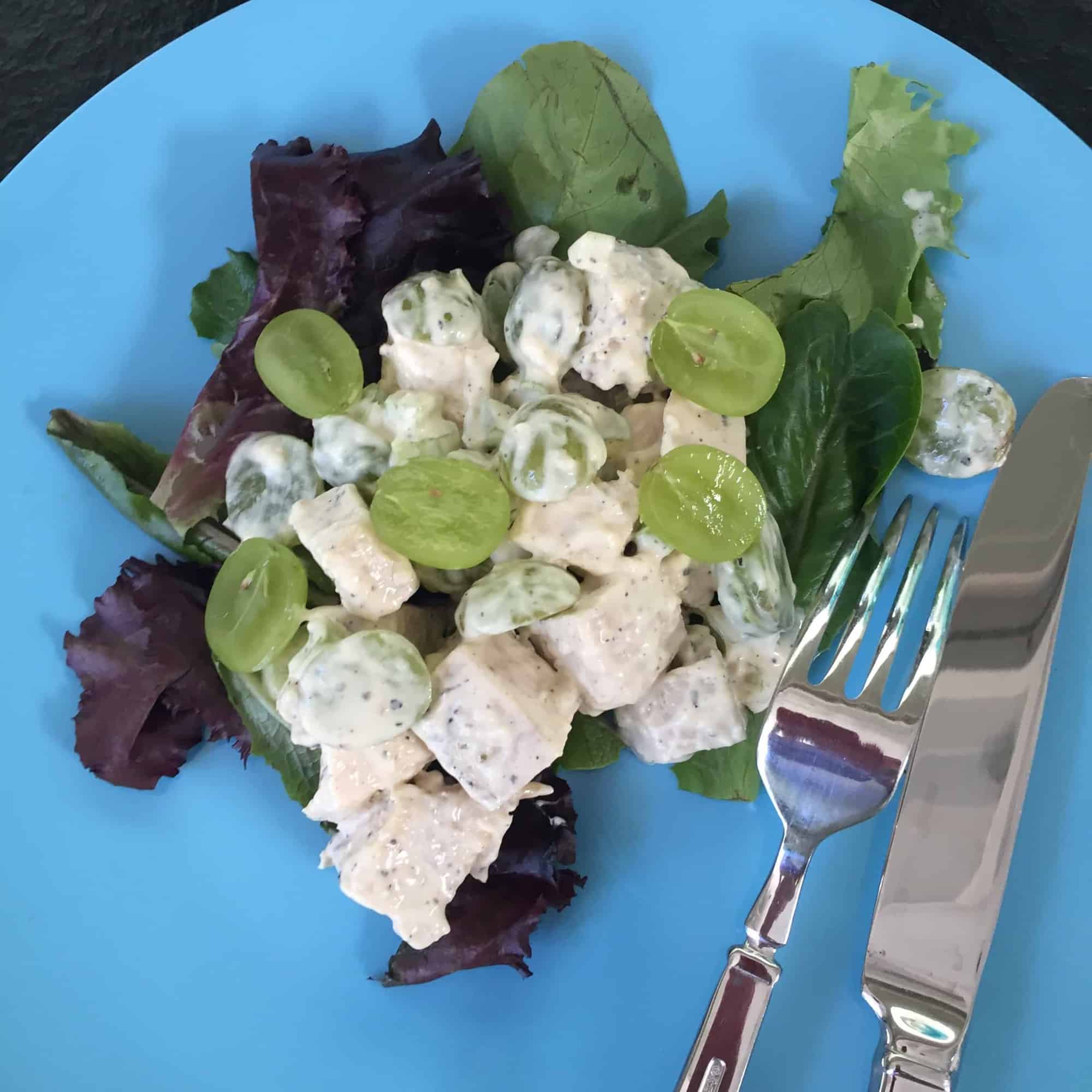 One of the best things to have in the refrigerator in summer is a large quantity of chicken salad.  You can serve it on a bed of lettuce or make it into sandwiches.  You make it once and you have it all week. And I think one of the best chicken salads is the one I make with tender all-white meat chicken, diced celery and scallions and for a little sweetness, green seedless grapes.  Mine doesn’t swim in a torrent of mayonnaise.  I like a little restraint and I also like a little punch of mustard in the mayo.  Lots of black pepper and a little salt and there you have it. This Chicken Salad is quite close to one that Ina Garten included in one of her earliest cookbooks “Barefoot Contessa At Home” (Clarkson Potter 2006).  She was still trading on her “Barefoot Contessa” food shop and catering operation.  There, she made Chicken Salad Veronique in large quantities. The great discovery in the recipe is how much better roasting the chicken breasts in the oven is over poaching them.  The chicken flavor is intensified instead of being poached away in the water.  The only real difference between hers and mine is that she eschewed any onion flavor at all and she seasoned the salad with 1 ½ tbsp. of fresh tarragon. No mustard went into her mayo either.  By all means try her recipe by cutting the mayo in half and eliminating the scallions and the mustard.  In doing so, don’t be surprised if the finished salad looks almost naked of dressing of any kind—the mayo just doesn’t stretch that far.

I wish I could tell you why this dish is called “Veronique”.  The late Pierre Franey, who wrote the 60 Minute Gourmet column for The New York Times, published a recipe for a warm version of Chicken Veronique noting that the dish is of Parisian origin.  But he took it no further than to say it’s come to mean any dish in which grapes, specifically the grapes used here, figure in its preparation.   He then tossed off the following:  “I doubt, as some propose, that it has biblical connotations after St. Veronica.”  Well that’s all I needed to hear to scurry to the search engines. Anthony’s Sermon to the Fishes Cupcakes”. (The former was invented by a woman married to a lawyer as a salute to St. Thomas More, the patron saint of lawyers.  The second featured the candy Swedish fish floating atop a sea of white icing.). But what of St. Veronique or Veronica in English.  In case your knowledge of saints is limited like mine, Veronique’s role in Catholicism was that she was so moved by the sight of Jesus carrying the cross to Golgotha and gave Him her kerchief to wipe His brow.  He handed it back and it was imprinted with the image of His face.  Pierre Franey was right.  The only thing close to a reason for the Chicken Salad to be called Veronique is that her feast day falls on July 12th.  And then only because this really is a summer salad.  Here is the recipe:

This Chicken Salad should become a summer staple.