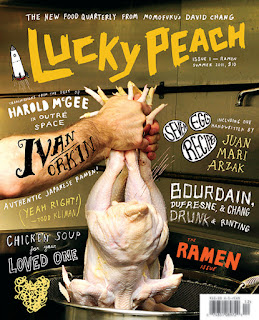 I don’t know if you are aware of a quirky food magazine called “Lucky Peach”.  It’s been in existence since 2011.  It was the brainchild of two long-time writers and the Chef, David Chang, of Momofuku fame.  It never toppled the juggernaut of food magazines like Food and Wine, Bon Appetit and Saveur.  Instead it attracted a following among just 30,000 subscribers to its 22 issues.  But it was hardly on its last legs. It gained 20 percent of its print subscribers just last year and its first quarter ad revenues were up 121 percent in 2017. It’s universally believed that the end of print as we know it is nigh, and Lucky Peach could be used as proof.  Their website had 750,000 unique visits in January alone.  But that’s not what happened at Lucky Peach.

Its editorial director, Peter Meehan, announced on March 13ththat after two more issues of the quarterly, it would shutter its Chinatown offices in May. Sadly, from recent press, it’s fairly obvious that the 3-man partnership ran the place aground. Mr. Meehan announced the news while Mr. Chang was less forthcoming. And while Mr. Chang has stated “We’re still talking to people who might want to help us out as a financial partner moving forward,” he said. “We’re trying to find an alternative, but what that is, no one really knows.” What is for sure is that Mr. Meehan is out of the picture after a long partnership with Mr. Chang for whom he wrote the Momofuku Cookbook in 2009.  This is a long introduction and a lamentation at the same time. I will miss Lucky Peach. But then I am the kind of reader who appreciated their 173-page issue that was all about Ramen.  Thankfully Peter Meehan isn’t leaving me empty handed.  That’s where Lucky Peach’s Lamb Burger comes into play…just in time for Barbecue season. 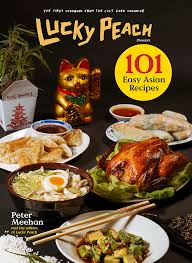 Lucky Peach produced four cookbooks in its lifetime and published one of them, an Egg Themed Cookbook, in April after receiving a seven-figure advance.  Today’s recipe appeared in “101 Easy Asian Recipes” and it was Mr. Meehan’s invention.  But unlike Beef with Broccoli which is an American invention (See https://chewingthefat.us.com/2017/04/beef-with-broccoli-and-fried-rice.html), Meehan’s recipe for Lamb Burgers closely hews to a dish served in Xi’an, the capital city of Shaanxi province and home, by the way, of the Terracotta Warriors in north central China. Xi’an is also the end of the Silk Road, the trade route that stretched from East to West, from Korea and Japan all the way to the Mediterranean Sea. Because of its unique position, Xi’an cuisine combines Chinese and Middle Eastern flavors.   Heavy in cumin, chili, Sichuan peppercorns—all of which are used in today’s recipe for Lamb burgers—this is not like any Chinese I have ever tasted.  And I am just bowled over at how good it is. 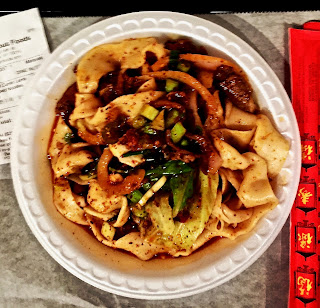 Xi’an Famous Foods was the first to introduce these unique flavors to New York.  They opened a 200-square foot stall in The Golden Shopping Mall in Flushing, Queens in 2005.  Now they have 8 restaurants scattered about the city dispensing Xi’an specialties including hand-ripped noodles called liangpi “cold skin” noodles, lamb pao mo soup and hand-pulled Biang Biang noodles.   I am so taken with their extraordinary “Spicy Cumin Lamb with Hand-ripped noodles” ($9.69), pictured here, that I have yet to make my way down the menu where I would find the “Spicy Cumin Lamb “Burger” ($4.68).  Ingredient-wise today’s burger is very close to Xi’an Famous and likely should be given the same admonishment “Not for the faint of heart, but famous for a reason”.

I followed today’s recipe for Lamb Burgers to the Tee. Cumin and Jalapenos are everywhere. Sichuan Peppercorns may be harder to find but if you can, please do.  They will make the dish more authentic.  All three spices add immeasurable flavor to ground lamb. The meat cooks directly on a bed of sautéed red onion and jalapeno.  I used brioche buns and cooked the burgers on a stove-top grill pan.  I served the dish with a simple Arugula salad one night, a mixed green salad another night. Now I can hardly wait to cook them on our outdoor grill.   Here is the recipe:
Recipe for Lucky Peach Lamb Burgers
Makes 4 burgers. Takes just 20 minutes to make. 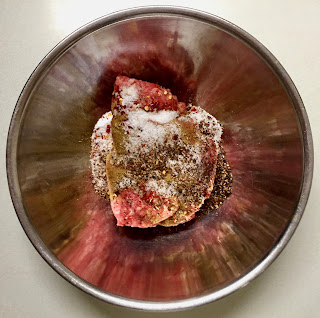 1. Create a flat-top cooking surface on a gas grill by using a couple of large cast-iron skillets, or a thick metal sheet like a Baking Steel, or soapstone cooking tiles. Light the grill, and set the burners to medium. Lower top of grill, and allow it heat. 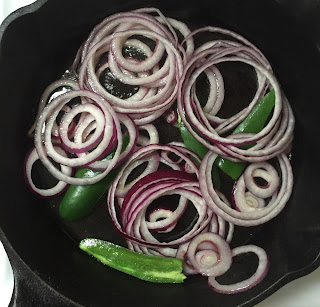 3. Raise the lid of your grill, add the oil to the cooking surface and use a spatula to coat it, then place the onions and jalapeños on the surface, and fry them until lightly browned but still crunchy, approximately 3 to 5 minutes. 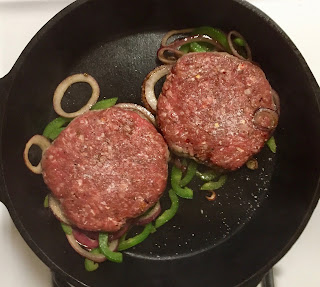 4. Separate the vegetables into four piles with a good amount of space between them. (If using two pans, each pan should contain two piles.) Top each pile with one of the balls of meat. Use the spatula to smash the balls into flat patties, approximately 1/2 inch thick. Cook until the bottom of each patty is well browned and the meat is opaque about halfway to the top, approximately 3 to 4 minutes. Flip each patty, and cook through, approximately 3 minutes for medium. 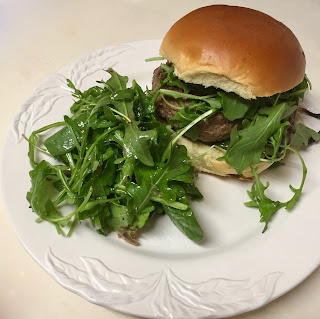 5. Place patties on buns, and top each one with cilantro leaves.