Lucky me!  I’ve been traveling most of the month of May.  I’ve done two almost back-to-back river cruises, one on the Rhine from Basel, Switzerland to Amsterdam, Netherlands with stops along the way in France and Germany.  A few days home and I was off to France and the magic of the Rhone and Soane rivers from Arles to Lyon.  You’ll notice that at no point did I spend a moment in Italy.  And as much as I enjoyed every morsel consumed on these two wine and food-centric trips, I just could not wait to get home and cook some Italian food.  Fortunately, my new-found Italian friend, Letizia Mattiaci, must have read my mind. (See my previous post on Letizia here: http://chewingthefat.us.com/2017/03/come-take-trip-to-umbria-and-bring-back.html)  In my clogged e-mail box, was a letter from Letizia and a recipe that she says she’s been making a lot this spring.
Letizia goes on to say that “It’s one of those quick mains which is perfect for a weekday and it will be especially useful later when it’s simply too hot to cook for more than 10 minutes. If you can’t find juicy fennel bulbs, substitute with diced zucchini and a handful of basil leaves instead of fennel fronds.  The vegetables serve as a bed for the braised sausages, ideal for absorbing the herbal aromatics and luscious meat juices”. 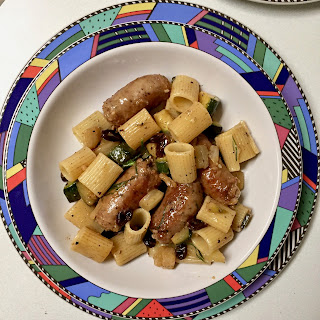 As most readers know, I am pretty much a stickler at obeying recipes to a Tee, especially when they come from such a reliably great cook as Letizia.  However, I could not resist combining both fennel and zucchini together and, simply because I didn’t have a drop of dry white wine in the house, I used a leftover Reisling.   The resulting dish was a mixture of crunchy fennel and softer zucchini, the raisins and the Reisling gave the sauce a lovely sweetness and the sausage was brimming with juice from using Letizia’s easy braising technique.   This is a perfect main to serve all by itself, perhaps, as Letizia suggested, with slices of rustic bread or a potato salad “made with diced boiled potatoes tossed with chopped spring onions, parsley and your best extra virgin olive oil”.   As I said, I hadn’t had Italian food for weeks.  I went with meza rigatoni and, in deference to my recent trip to La Belle France,  I tossed it in some Brittany-born salted butter, the kind you can buy at Trader Joe’s.  Here is the recipe:
Recipe for Italian Sausage with Fennel, Zucchini and Raisins adapted from Letitizia Mattiacci.  Serves 3 to 4, depending on the size of the sausages. 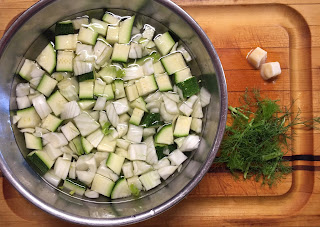 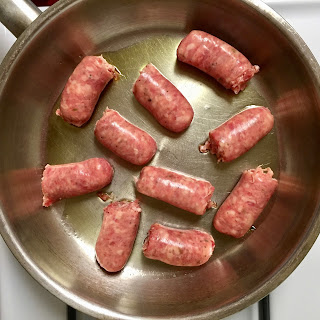 2. Heat briefly 1 tablespoon of olive oil in a large skillet over low heat. Add the sausages and 1/2 inch water, then cover and simmer until cooked through, about 20 min. 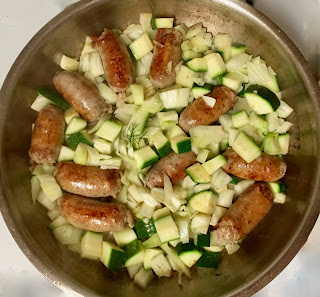 3. Increase the heat to high, stir the raisinsand the diced fennel and zucchini  into the skillet and cook for 1-2 min until the fennel is caramelized outside but still crunchy. Meanwhile, chop the fennel fronds. Add 2-3 tablespoon of white wine to the sausages and scrape up any browned bits in the bottom of the skillet. 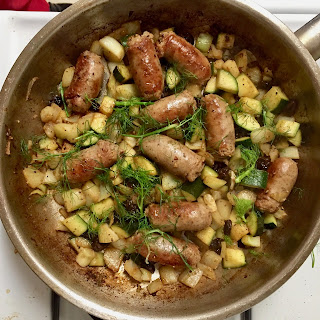 4. Cook until the liquid has evaporated, about 1 minute. Add the minced garlic, a twist or two of black pepper, stir one last time and plate.

Serve the sausages piping hot topped with the fennel fronds.