Letizia Mattiacci: The Umbrian Cook on an American Tour

Learn how to cook the cuisine of this Italian province from a native cook and teacher. Then you can make dishes like this gorgeous Melanzane alla Parmigiana…Eggplant Parmigiano 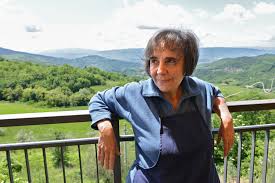 Umbria — the Italian province sandwiched between Tuscany, Le Marche, and Lazio in what is called Italy’s Cuore Verde, its ‘green heart’ — is the home of some of Italy’s finest fare. Its green-gold olive oil, red wines, and particularly its cured meats, salumi, are prized throughout the country. But outside of Italy, the richness of its cuisine is hardly known. This is slowly changing, as many have been singing the praises of this province, home to the historic towns of Perugia and Assisi. And Letizia Mattiacci is one of the leading lights in this new movement.

The author of a self-published cookbook called A Kitchen with a View is embarking on a two-week American tour stretching from Richmond, Virginia, to Boston. It will give the cook an opportunity to teach people about Umbrian cooking as well as to meet graduates of the cooking school she and her husband run only 15 minutes from Assisi. Called “Alla Madonna del Piatto,” their home is a part of Italy’s “agriturismo,” a network of some 20,000 approved farm properties where tourists can stay overnight or over a week. The guests will hardly by roughing it: Their six restored guest rooms each have an en-suite bathroom and the terra cotta tile floors feature radiant heat. Once ensconced, guests can learn about farming, rural life, and — especially — Umbrian cooking through hands-on classes taught by Mattiacci herself.

Letizia and her husband, Ruurd de Jong, have lived all over the world in their roles as research entomologists. Roughly 18 years ago, they determined to settle in Letizia’s native Umbria. They bought an abandoned farmhouse in the hills near Assisi. The transformation of the farmhouse was just one part of their project. They planted a 250-tree olive orchard, cultivated grains on hectares of land, and oversaw the growth in their vegetable and herb gardens. During this extensive renovation, they came across a ceramic plate in the rubble. Depicted on the plate was a medieval lady with flowers in her hands. Thus was born the name for their estate: “The Lady of the Plate” or “Alla Madonna della Piatto.” 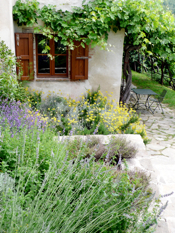 The cooking classes take place in their professional kitchen that does indeed have a view of the garden. Starting at a leisurely 11 a.m. with a glass of wine, students first walk around the herb garden. Then, around an old farmhouse table, preparation begins with — what else? — a lesson in pasta making. Letizia is a seasonal cook, so menus and classes reflect the market and garden offerings of the moment. In the winter, soups and risottos find their way into her classes. In summer, when fresh vegetables pack the garden, eggplant parmigiana may make an appearance.  (Letizia’s recipe for Eggplant Parmigiana follows)  And there’s always room for dessert. (Panna cotta, anyone?) The class then sits down on the panoramic terrace or beside a cozy fire in the dining room to savor what they’ve just made. The class ends early enough that an afternoon visit to Assisi is often on guests’ to-do lists. (For complete details on the school or to make reservations, visit the agriturismo’s website.) 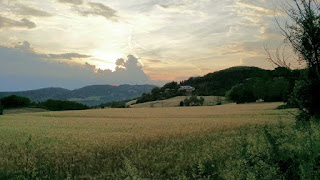 For those who don’t choose to make the trip to Italy, A Kitchen with a View will bring Umbria into their kitchens. The book, which is divided into seasons of recipes, is as close to a trip to Umbria as one can imagine. The stories of local customs and life lessons make this book far more than a mere recitation of recipes. The region and its food come to life here. The recipes are truly accessible, with step-by-step instructions that are easy to follow.  It’s the kind of cookbook that is a destination itself, a lovely visit to a wonderful part of the world.

Here’s the complete schedule of Letizia Mattiacci’s not-to-be-missed American visit:
March 17, 2017, 6:30–8:00 p.m.
A Kitchen with a View cookbook signing and presentation with a slide show at Via Umbria in the Art Gallery, Washington, D.C.
March 19, 2017, 6:30–8:30 p.m.
Cookbook dinner and book signing at Nota Bene in Richmond, Va.
March 21, 2017, 6:30–8:30 p.m.
Cookbook dinner and book signing at Enoteca Sogno in Richmond, Va.
March 23, 2017, 6:30–8:30 p.m.
“An Evening in Assisi,” cookbook dinner at Gran Cafè L’Aquila in collaboration with the America-Italy Society in Philadelphia. The team at Riccardo Longo’s splendid eatery/gelateria/coffee roastery is planning a delicious menu based on Letizia’s authentic family recipes paired with Umbrian wine and their award-winning gelato. Reservations must be made via the AISPhila website.
March 27, 2017, 6:00–9:30 p.m.
Umbrian dinner at Porsena in New York City hosted by “Renaissance woman” and pasta master Sara Jenkins.
March 30, 2017, 6:30–8:30 p.m.
“Italy, Revisiting and Reinventing Traditions: Umbria.” Letizia will talk about the Umbrian traditions and demonstrate how to make fresh pasta, an ancient recipe which she has adapted to the modern life of busy cooks.  The event is hosted in Cambridge, Mass., by The Dante Alighieri Society of Massachusetts.
April 1, 2017, 2–4 p.m.
Join Letizia at The Harvard Coop at Harvard Square in Cambridge, Mass., for a talk about Umbrian rural life and cuisine and a signing of A Kitchen with a View followed by a hands-on demonstration of how to make stringozzi, a rustic pasta from Umbria.
Here’s Letizia’s recipe for Eggplant Parmigiana in her own words…

I’m biting my nails here because I have so many things to tell you and if I don’t make a selection,  I’ll probably never get to the recipe. First of all the name. Parmigiana literally means “from Parma”. However, this  recipe has been known as a tradition in Naples and Sicily since the early XIX century. Food historians have not come up with a conclusive explanation of why an iconic Southern dish has a Northern name. Some say that preparing vegetables alla parmigiana – i.e. in the way of Parma – refers to the use of layers interspersed with cheese and baked.
In origin, the eggplant parmigiana must not have not included Parmesan cheese which is now a standard ingredient. The Southerners used pecorino, provolone, caciocavallo, or mozzarella.
Who knows, may be the people from Parma invented the method and the Southerners adapted it to local ingredients. I have inscribed this dish in the list of the mistreated foods of Italy. Too often I see impossibly fat recipes oozing cheap cheese, heavy bread-crumb coating and drowning in industrial amounts of oil. A gastroenterologist nightmare. On the other hand I lost count of absurd adaptations to make it “light”. I admit it, it’s not a low-cal dish but if one wants dessert one has to have some sugar, right? So what’s the sense to use all sorts of alternatives which will taste and look like something else? The eggplant parmigiana is a dish of fried eggplants baked with a little cheese and tomato sauce.  That’s it, simple, vegetarian and fantastic if properly prepared.
Recipe

Eggplants:
Prepare and fry and  eggplants as explained here: https://madonnadelpiatto.com/2009/10/14/im-going-eggplant/ . Place in a colander for a few hours or possibly overnight to get read of excess oil. Grilled eggplants are often too dry, but if you don’t want to fry blanch them before grilling to keep them moist. Here is my recipe.
Sauce:
Heat 1 tablespoon EVO oil in a pan, add the onion, cover  and saute over low heat until translucent. Stir in the tinned tomato and a sprig of basil, cover again and cook for approx. 10 min. Season lightly with salt and black pepper.
Preheat oven at 180 °C / 350 °F.
Build up the parmigiana: spread two tablespoons of the sauce on  the bottom of a ovenproof pan. Cover with a single  layer of eggplant slices. Top with mozzarella, 2-3  basil leaves, 1 tablespoons of Parmesan and 2-3 tablespoons of sauce. Continue using all ingredients and finish with a layer of eggplant, sauce and Parmesan. Bake for 30 min until golden and bubbly.  You must allow it to cool off for at least 10 min before serving but it’s best at room temperature. In the summer we have it as a main vegetarian meal with crusty bread to mop up the gorgeous juices.