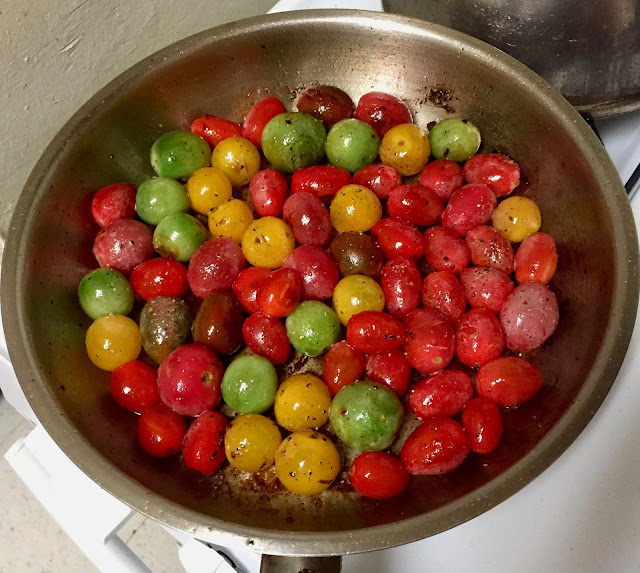 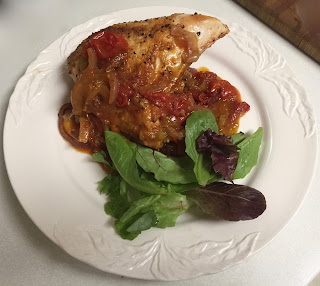 I confess to being a tomato junkie.  I adore the fruit, and yes, botanically it is a fruit.   Nothing made me happier than the arrival of great little tiny tomatoes variously called ‘cherry’, ‘grape’ and most recently, ‘heirloom mixtures’.   They arrived in this country from southeast Asia as recently as the 1990s.  While ‘tomatoes on the vine’ used to be the only out-of-season tomatoes that even came close to the real thing, the oval shaped grape tomatoes and their round cherry counterparts have a higher sugar content. I prize their sweetness and use them often. When this recipe for Chicken Arrabiata, that spicy, almost fiery Italian tomato sauce appeared, I had to try it. It takes under an hour from start to finish.  And in the end you’re left with a richly fulfilling and extraordinarily flavorful chicken.  It’s a great dish for a chilly weeknight.  You can serve it with rice or a side of pasta but served with crusty bread and a salad, it makes an easy and satisfying dinner.  And while you make it, you can read about it… 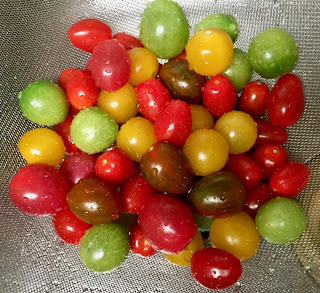 Sugo all’ Arrabiata, its Italian name, is a combination of garlic, tomatoes and chili peppers cooked in olive oil.  Arrabbiata, whose literal translation from Italian is ‘angry’ is so named due to the heat of the peppers. It’s closely related to two other Italian sauces you may be familiar with:  Puttanesca and Fra Diavolo.  While both of these sauces are spicy, they’re quite different in their ingredients.  Fra Diavolo (Brother Devil in Italian) is completely an Italian-American invention. It is basically impossible to find in Europe and it is almost exclusively served with Homarus Americanus or our native lobster.  Puttanesca has a closer connection to Arrabiata. But it’s an interesting story about why they are different. 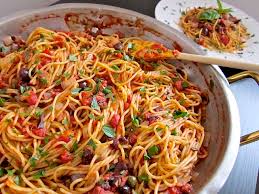 Puttanesca is the famous “Whore’s Pasta” of Rome.   It’s variously said that the preparation could be thrown together quickly, between assignations. But I think there’s a case to be for aanother story of why the ladies of the evening made it their own. Much of their business was conducted in their client’s cars. The women stayed by the side of the road awaiting customers.  And to feed themselves, they cooked pasta over open fires.  Their choice of sauce included bits of chili peppers, all ingredients portable enough for their outdoor cooking. The heat of the sauce must have helped dispel the cold of many a Roman night.   And there’s the key difference between it and the Arrabbiata being made here. While the women relied on chili flakes and chili powder for their heat, Arrabiatta uses whole diced fresh chili peppers. You can adjust the heat to your personal preference.  I used a hot green pepper and loved the results.  The original recipe, from Saveur Magazine, called for Fresno chilies. And here it is:
Chicken Arrabiata from Saveur Magazine
serves 4-6.  Takes 45 minutes 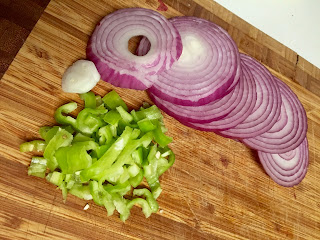 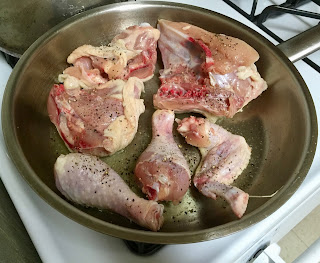 1. Season chicken with salt and pepper. Heat oil in a 12-inch skillet over medium-high; working in batches, cook chicken, turning as needed, until browned, 12-15 minutes. 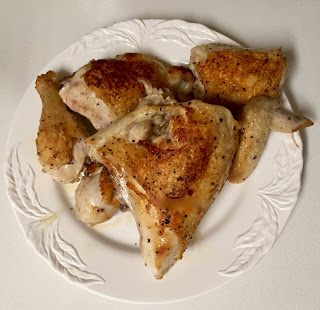 2. Transfer to a plate and add tomatoes to skillet; 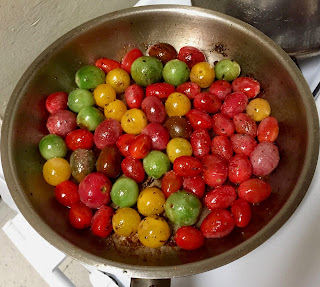 3. Season with salt, pepper, and sugar. Cook tomatoes, shaking the skillet, until they just begin to burst, about 5 minutes. 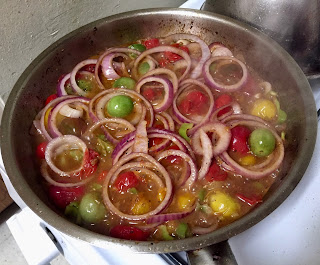 4. Add the garlic, chile, and onions and cook until onion is soft, about 6 minutes more. 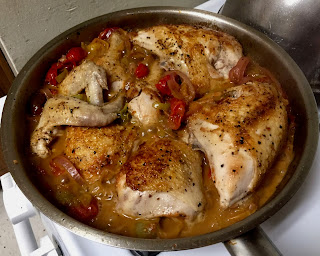 5. Return chicken to pan and cook, covered, 5-7 minutes. Remove lid and cook, stirring and breaking up tomatoes, until the chicken is cooked through and the sauce has thickened slightly, about 18 minutes more.