From my very first taste of a Patty Melt, I was hooked.  Cheese-y, Onion-y, Buttery and of course Meaty, the earthy odor of Rye bread rises from the crisp package of ingredients that seem meant for each other. I was smitten at a Friendly’s Restaurant in Rhode Island when I went there for College.  And for years I’ve made pilgrimages to Friendly’s for just that one dish.  A couple of years ago, Friendly’s collapsed and closed all but a few of its restaurants. I almost collapsed with it.  Fortunately, I was able to find a local substitute at a restaurant called Little Estia  (1615 Sag Harbor Turnpike, Sag Harbor NY 11963 Tel:(631) 725-1045.  It’s called a Freddy Melt and while it’s light on the caramelized onions essential to a Patty Melt, it will do in pinch.  And there’s always the option of making one at home…see http://chewingthefat.us.com/2013/04/the-perfect-patty-melt-and-its-most.html.  My fierce devotion to the Patty Melt drew me to Sam Sifton’s recent Sunday Times Magazine article called “Patty Party”.  There, next to the left of my pride and joy sat a second sandwich, described by Sifton as ‘its modern vegetarian cousin’.  I couldn’t wait to get into the kitchen to try it.

I wish I could tell you I was thrilled with the results. But I wasn’t.  All the elements are there…the Gruyere cheese oozing out of the sides of the rye bread, the onions dark golden brown. But then there was the matter of the Portobello Mushrooms, which are responsible for making this dish Vegetarian.  They slid out of the sandwich uncontrollably, making picking the thing up in your hands a dry cleaning bill in the making.  And while the beef patty in the original is actually shaped to fit the bread, the use of the entire mushroom cap made gaps in the sandwich inevitable.

Now I am a stickler for recipes. I don’t change about ten things in a recipe and them pronounce it no good.  But I craved this version of a Patty melt because for all its faults it was full of flavor and, I tried to convince myself, healthier. Andrew wasn’t buying into that one bit.  Alright, maybe healthier for the planet.  I had a couple of ideas to redo the recipe. But Andrew had a suggestion for changing the recipe that made it the huge success I am sharing with you today. And I’m reminded of a recent quote from Jacques Pepin “So what is the use of a recipe? A recipe is a teaching tool, a guide, a point of departure. Follow it exactly the first time you make the dish. As you make it again and again, you will change it, massage it to fit your own taste and aesthetic. Eventually, it will become your own personal recipe.” That’s all I needed to hear.  I can look Mr. Sifton in the eye after that one. And here’s how I made my Meatless Monday Patty Melt, which I call my Virgin Patty Melt. The most important instruction for this recipe is low and slow….low temperatures for everything from the slowly caramelized onions, to the finished sandwich itself.  Here is the recipe.
Recipe for Virgin Patty Melts
60 Minutes. Makes 4. Takes about 45 minutes. Recipe is easily halved (although you should keep the proportions of cooking liquid for the Portobellos as is.)
2 to 4 tablespoons unsalted butter
2 large onions, peeled and thinly sliced
Kosher salt and freshly ground black pepper to taste
8 slices seeded rye bread
8 oz. Gruyere, shredded
1 tablespoon olive oil
2 tablespoons soy sauce
2 tablespoons balsamic vinegar
1 minced garlic clove
8 clean, stemmed large portobello caps.
Equipment:
You will need a very large skillet to accommodate all four sandwiches or make them in two batches, keeping the first batch warm while you make the second. 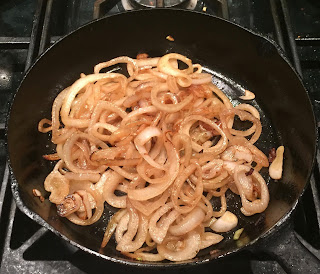 1. First, caramelize onions. Melt 2 tablespoons of the butter in the skillet set over low heat. When it foams, add the onions and sprinkle with salt. Do not stir immediately. Wait 1 minute, then begin to stir frequently for 5 minutes or so, or until the onions have released some liquid and started to become translucent.  Note: The onions pictured here are at this stage and not the finished onions which should be darker and more caramelized.
Reduce the heat to medium, and cook, stirring often, for what will seem like a very long time, until the onions are fully melted and dark golden brown, approximately 30 to 40 minutes. Remove onions, and set them and the skillet aside. Do not wipe the skillet clean. (You can caramelize the onions a day ahead of time and reheat slowly when you’re ready to cook.) 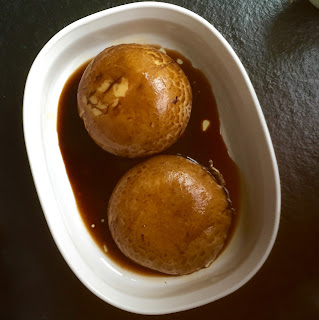 2. Take a small baking dish, and put into it  soy sauce, balsamic vinegar and minced clove of garlic. Brush each portobello caps with olive oil, put them in the baking dish, then cover and roast in a 400-degree oven for 30 minutes, turning once. 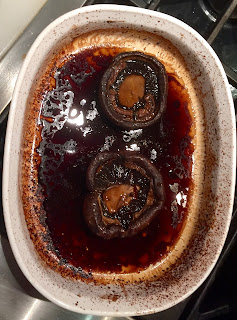 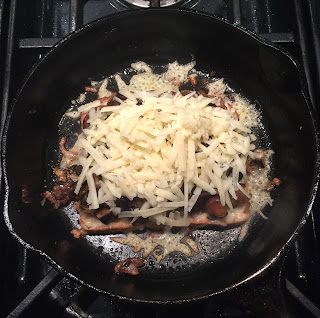 4. Set the skillet to low heat, and put four pieces of rye bread into the butter that remains from cooking the onions. Top each piece with a layer of grated cheese, then ¼ of the chopped portobellos, then some of the caramelized onions, and finally another layer of cheese and another slice of rye. 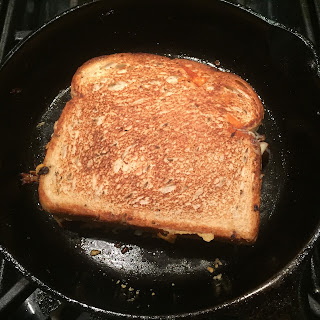 5. Use the spatula to press down on the sandwiches, and after about a minute or so, carefully turn over each patty to begin to brown the other side. (You may need to add the additional butter.) Cook until the cheese is fully melted and the bread is golden brown and crisp on both sides. Slice in half before serving. 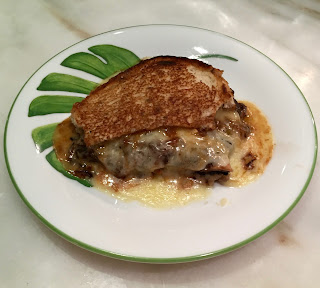