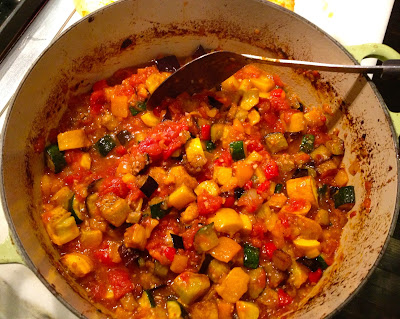 With the farm stands near us barely able to contain the bumper harvest from this glorious sunny summer in the Hamptons, it seems highly appropriate to bring you a great recipe for a vegetable feast.  And what says summer more than this Provençal classic, Ratatouille.  I first published this three years ago and it is so popular, I thought I’d share with you again. So here goes:
Thomas Keller, arguably the most influential chef in the country, recently wrote about Ratatouille in the Los Angeles Times.  He wasn’t talking about the 2008 movie of the same name, a fanciful food fable that won the Oscar that year for best Animated Feature.  He was referring to that summer classic that incorporates so many fresh vegetables your kitchen looks like you’ve robbed a farm stand.  What Chef Keller pointed out was how adaptable the dish is.  It starts out as a vegetable stew that’s an incomparable side dish or a vegetarian meal all by itself. 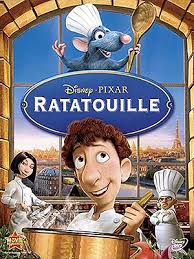 It is quite labor intensive so there’s no point in making a tiny batch of the stuff. Instead Chef Keller encourages making a recipe that yields 16 1 cup portions.  This, he points out, gives you the basis for any number of pasta sauces, a perfect soup base– even a sandwich spread.  The one thing the dish requires, besides a cornucopia of fresh produce, is time.  The start to finish on the dish is 4 hours.  I’d say that actually errs on the short side. But a lot of that time is spent while the ratatouille sits in the oven reducing the liquid away until you’re left with beautifully tender vegetables in a thick, silken sauce.  So you can sit back and stir occasionally.  All that time is a perfect opportunity to re-view “Ratatouille”, the movie.  If you’re uninitiated to its charms, it’s the story of an ambitious young chef and, yes, a Rat who cook away in a Parisian restaurant.  And what foodie doesn’t want to revisit Paris?

The master recipe for today’s Ratatouille produces a dish that is both acidic and sweet, beautifully colored and rich with olive oil. The latter is perhaps the one I’d go a little easier on.  The recipe calls for 2 cups of Olive Oil.  I found that I didn’t need that amount.  It is used largely to sauté the summer squash, zucchini and eggplant that are the backbone of the dish.  There’s no question the quantity of olive oil gives the dish an intense richness but I’d pull back a little. As you can see in the photo, when I served the Ratatouille as a side dish with steak, the olive oil separated and pooled on the plate.  Maybe it’s just a personal preference, but I’d prefer that not to happen.

As to Chef Keller’s adaptations, he recommends folding capers into the ratatouille and making pasta sauce.  He serves this on big thick Bucatini topped with bread crumbs and grated Parmigiano.  I followed these instructions and had a great vegetarian supper.  It occurred to me that I could have sliced some sweet Italian sausage, sautéed it and then folded in the Ratatouille for a hearty meaty version.   I also put a serving of Ratatouille in a gratin dish, topped it with sliced steak and a slice of cheese and broiled it briefly for a quick evening meal for one.

While I have yet to try Chef Keller’s other suggestions, here they are:  Pulse the Ratatouille in the food processor with mustard, vinegar and a dash of Tabasco for a sandwich spread.  Or serve the spread with pita chips as an hors d’oeuvre.  Carry the food processing a little further or put the Ratatouille in a blender with some cold chicken stock and a dash of Pernod and you’ll have a summer soup Chef Keller swears by.  One final word from the Chef:  If you want to save the Ratatouille for later, you can freeze it for a month as long as you leave head room in the freezer container to make up for the expansion that happens when the Ratatouille is frozen.  Here is the recipe:
Recipe for Thomas Keller’s Ratatouille
Takes a minimum of 4 hours. Yields about 16 (1-cup) portions 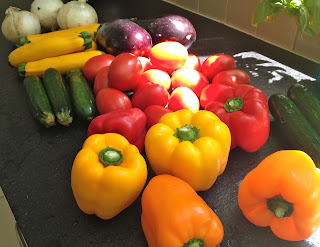 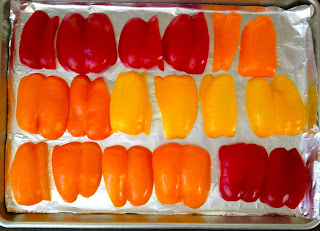 1. Heat the oven to 450 degrees. Coat the peppers with a thin film of olive oil (about 2 tablespoons), then place the peppers, flesh side down, on a foil-lined baking sheet. Roast until the skin begins to loosen, then remove from the oven, 10 to 15 minutes. Transfer the peppers to a plastic bag, and set aside to steam until they are cool enough to handle. Peel the peppers. (As an alternative to roasting the peppers, you can use a blowtorch to char the skins of the peppers while they are still whole, and then gently scrub the charred skin off under running water to remove the skins.) Dice the peeled peppers into one-half-inch pieces and set aside. Reduce the oven temperature to 350 degrees. 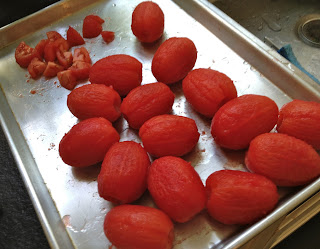 2. Bring a small pot of water to a rapid boil. Stem the tomatoes and score the skin on the bottom into an X. Plunge one tomato at a time in the boiling water until the skin begins to loosen, about 15 seconds. Immediately transfer the tomato to a bowl of ice water to stop the cooking. Repeat this process with the remaining tomatoes. Remove the tomatoes from the ice water and peel the tomatoes. Dice the tomatoes into one-half-inch pieces, saving all the juice, then set them aside.
3. Cut the thyme sprigs, parsley sprigs and bay leaves into approximately 1-inch lengths. Place the herbs in the center of an 8-inch-square piece of cheesecloth. Gather the ends of the cheesecloth around the herbs, and twist them to form the herbs into a sachet. Tie the sachet securely with a piece of butcher’s twine. 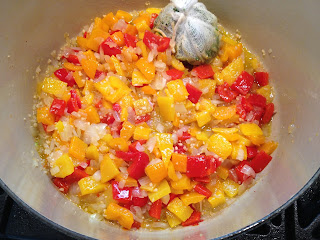 4. Heat a wide, shallow pot or roasting pan over medium heat and add one-half cup oil. Add the onions and the sachet of herbs to the pot along with a good pinch of salt — this will help release the liquid inside the onions and allow them to sweat without coloring. Sweat the onions until they are soft and translucent, about 10 minutes. Add the garlic and sweat until it is fragrant and the raw flavor has subsided, about 2 minutes. 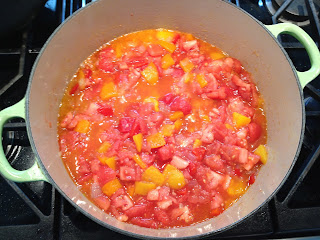 5. Add the tomatoes and peppers to the pot along with another pinch of salt, and bring them to a gentle simmer. The tomatoes will begin to release their liquid. Use a rubber spatula to scrape the sides of the pot clean. 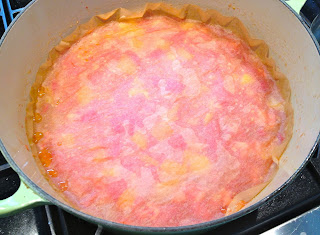 6. Place the cartouche or paper lid on top of the surface of the tomatoes, taking care to press out the air pockets and transfer the pot to the center rack of the oven. Bake the ratatouille base in the oven, periodically removing the pot from the oven and giving it a stir. Continue to bake until almost all of the liquid has evaporated but the tomatoes are still moist, 1 to 11/2 hours. If needed, remove the cartouche toward the end of baking to help the liquid reduce more quickly. 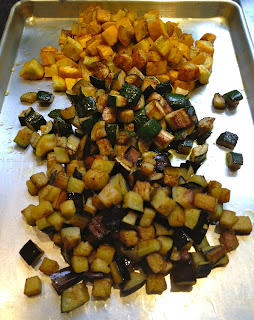 7. While the ratatouille base is baking, heat a large sauté pan over medium-high heat. Add approximately one-half cup oil and the yellow zucchini (the zucchini should cover the pan in a single layer; if necessary, cook the zucchini in batches). Lightly season the zucchini with salt and pepper, and cook until the zucchini is lightly caramelized and just barely cooked through, 6 to 10 minutes per batch. Transfer the cooked zucchini to a baking sheet, then repeat this process with the green zucchini and then the eggplant, adding more oil each time (you will use approximately one-half cup oil for each of the vegetables). 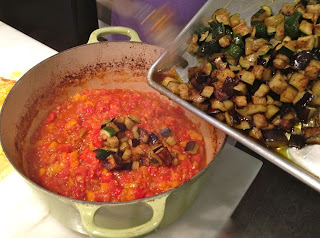 8. Once all of the vegetables have been cooked, remove the cartouche from the ratatouille base and fold the zucchinis and eggplant, their juices and oil, into the base. Stir to incorporate all ingredients evenly, then clean the sides of the pot with a rubber spatula, re-cover with the cartouche and return the pot to the oven. Bake until the vegetables are very tender and the ratatouille thickens, 45 mins to an hour. 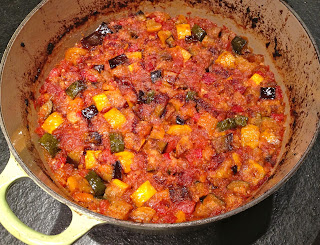