Attention Trader Joe’s Shoppers: The Top 15 Items You Should and Shouldn’t Buy at TJs.

My gorgeous daughter-in-law Kym introduced me to Trader Joe’s long before it ever came east. Kym was thrilled with TJ’s because it helped her out in the kitchen.  She sparked to items that were wholesome and, in many cases, pre-marinated, pre-washed, and pre-trimmed. Its offerings were rather like having a prep chef in her kitchen.   And the results were almost always predictably good.
Trader Joe’s started out as a convenience store in California in 1958.  It later took on its Founder’s first name when Joe Coulombe decided his “Pronto Markets” were so similar to 7-Eleven that he dared not compete. He noticed his friends and customers were taking off for vacations all over the world and bringing new food tastes back with them. So while on vacation himself he decided to name his operation Trader Joe’s.  The name is fluid: Depending on the ethnicity of the food in question, it can become Trader Jose when attached to Mexican food, Trader Ming’s when its Chinese food or Trader Giotto’s when it’s Italian.  While a major grocery store may stock 50,000 items, Trader Joe’s has only 4000.  And of that 4000, fully 80{7764cd352edcf19b608e75b52a560f8f0623df8defec59f0ed185161f2ba1413} are branded “Trader”. Trader Joe’s promises that its private-label products contain no artificial colors, flavors, preservatives, MSGor trans fats.  They eschew GMOs altogether and, in the dairy case, nothing comes from cows given hormones or antibiotics.  That doesn’t mean that everything is the store is as pure as the driven snow. Products without the TJ’s brand may indeed contain these ingredients.  But overall, the all-natural glow of TJ’s offerings and very reasonable prices add to the allure.
Lo and behold Trader Joe’s finally landed in New York right near where I was working.  The lines formed out the door, which put me off the place.  And I was also saddened to see that New York liquor laws prohibited the sale of one of TJ’s most famous brands, Charles Shaw wines, better known as ‘2 Buck Chuck’ because in California at least, these wines sold for $1.99 a bottle.  So I did not instantly become a shopper.  Then a Trader Joe’s opened 3 short blocks from our apartment.  Despite the cold, lines form outside the store frequently and despite the incredibly long check out lines, I became an almost daily shopper there.

If I have a mantra, it’s that I try to avoid processed food as much as I possibly can.  So off my TJ shopping list is practically their entire freezer case.  I don’t buy into the family size lasagnas and an amazing array of ethnic dinners, all ready to be thrown into a microwave.  My Trader Joe’s shopping tends to be confined to their fresh salad mixes, fresh vegetables, spices, cheeses, milk and butter and yogurt.  Virtually every one of these items is extremely well priced.  Butter is a good dollar less than Land o Lakes. I can get 6 salads of out a $1.99 bag.  Beyond the great prices, I’ve discovered some items at Trader Joe’s that are out of this world.  And a few that should have a “Pass me Buy” sticker: They’re either frighteningly full of sodium or just not nearly as good as anyone’s version of homemade.  But TJs “Fearless Flyer”, which lands in our mail box once a month, convinced me to delve a little deeper into the product mix. With a couple of exceptions, I dutifully picked items I’d never tried before.  Here are the completely unscientific results of my most recent discoveries—good, bad or ugly—at Trader Joes: 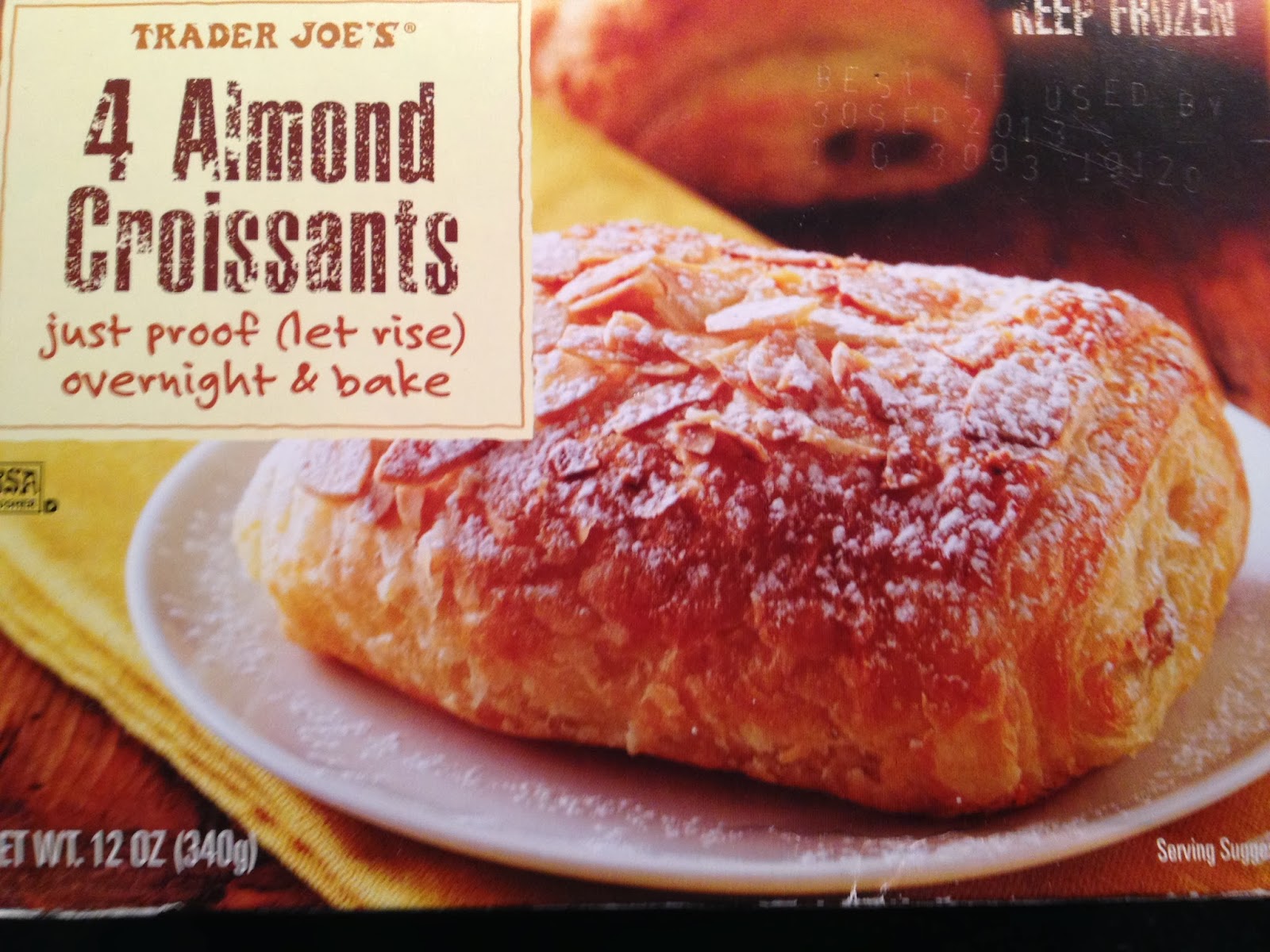 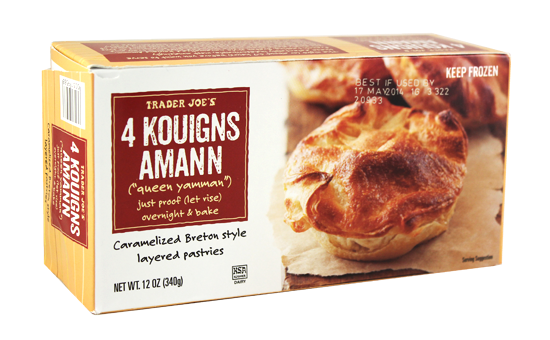 As I was doing an errand next to a very good local bakery, Andrew asked me to pick up two Almond Croissants. He would be the first one to agree that they didn’t hold a candle to the Almond Croissants at TJ’s.  # 2. Tj’s plain mini-croissants (8 for 3.99) win prizes too and their # 3. Pain au Chocolat (4 for 3.99) is superb. All you have to do is remember to proof them the night before. Unfortunately, I can’t recommend #4. Kouign Ammans, the Breton Pastry-de-Jour with the strange sounding name.  Pronounced Queen Ammon, I’d had the real thing at the Spring St. Bakery, Dominique Ansel. These just don’t work, burned easily and lost all semblance of shape in the oven. 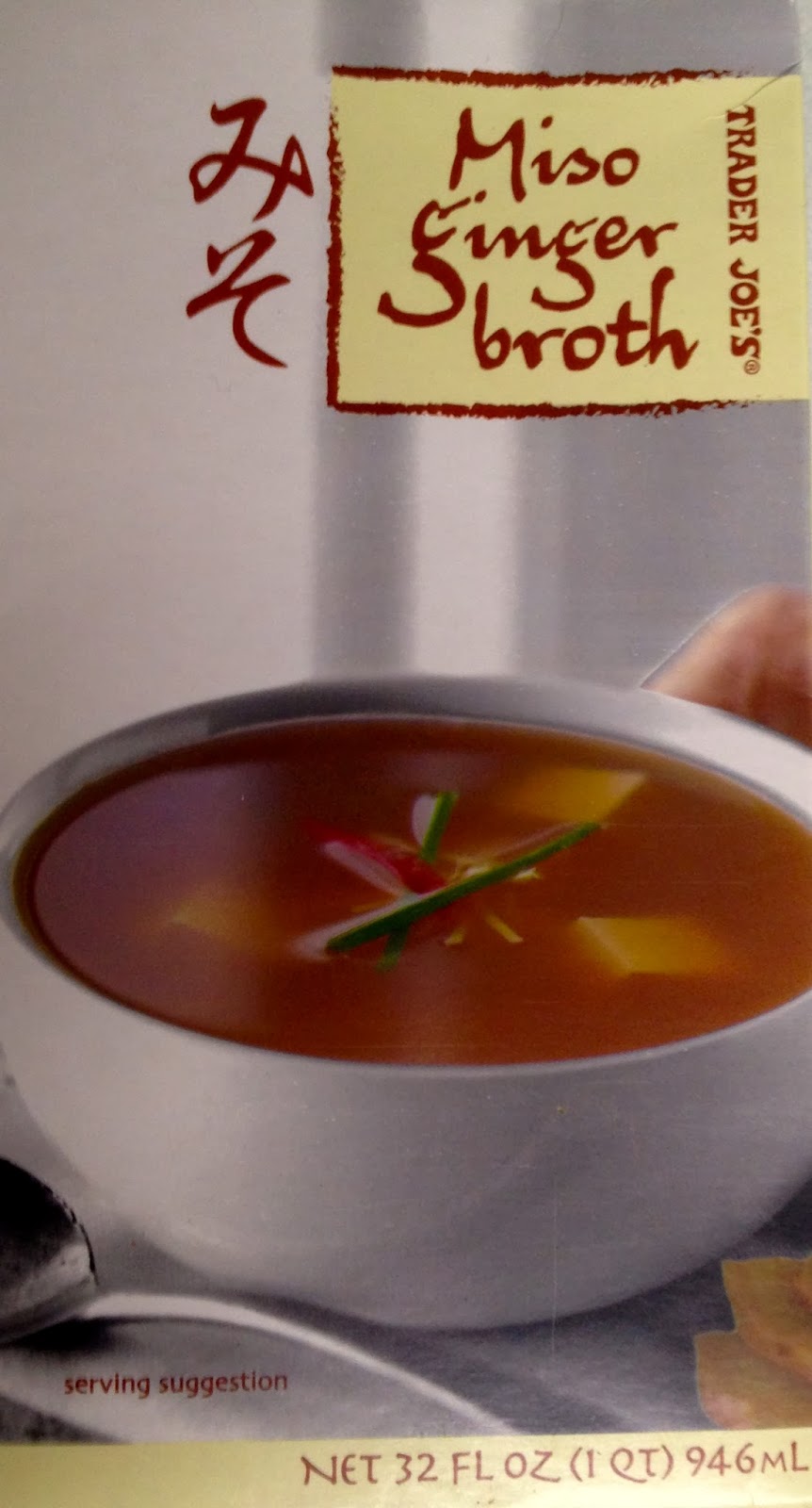 # 5. A new item that just hit TJs is Miso Ginger Broth 32 oz. for $1.99. This amazing Asian inflected broth would likely be fine all by itself.  Vegetarians can add tofu. I find it’s an amazing base for a soup made out of any Asian accented leftovers.  Say you’ve doggy-bagged some beef with broccoli or the remains of a stir-fry.  Just put it a saucepan, cover it with Miso Ginger Broth and boil away.  Amazing!
# 6. Organic Creamy Tomato Soup 32 oz. for 2.29.  This soup really gives Campbell’s a run for its money.  No Preservatives, No Artificial Colors or Flavors, Gluten-Free BUT, and this is important, lots of sodium, the one thing TJ’s can consistently be faulted for. In this case, an 8 oz. serving clocks in at 100 calories but the sodium represents 31 {7764cd352edcf19b608e75b52a560f8f0623df8defec59f0ed185161f2ba1413} of what you can safely consume in a day.  There had to be some caveat on anything that tastes this good.
Our Chicken Dinner a la Trader Joe’s 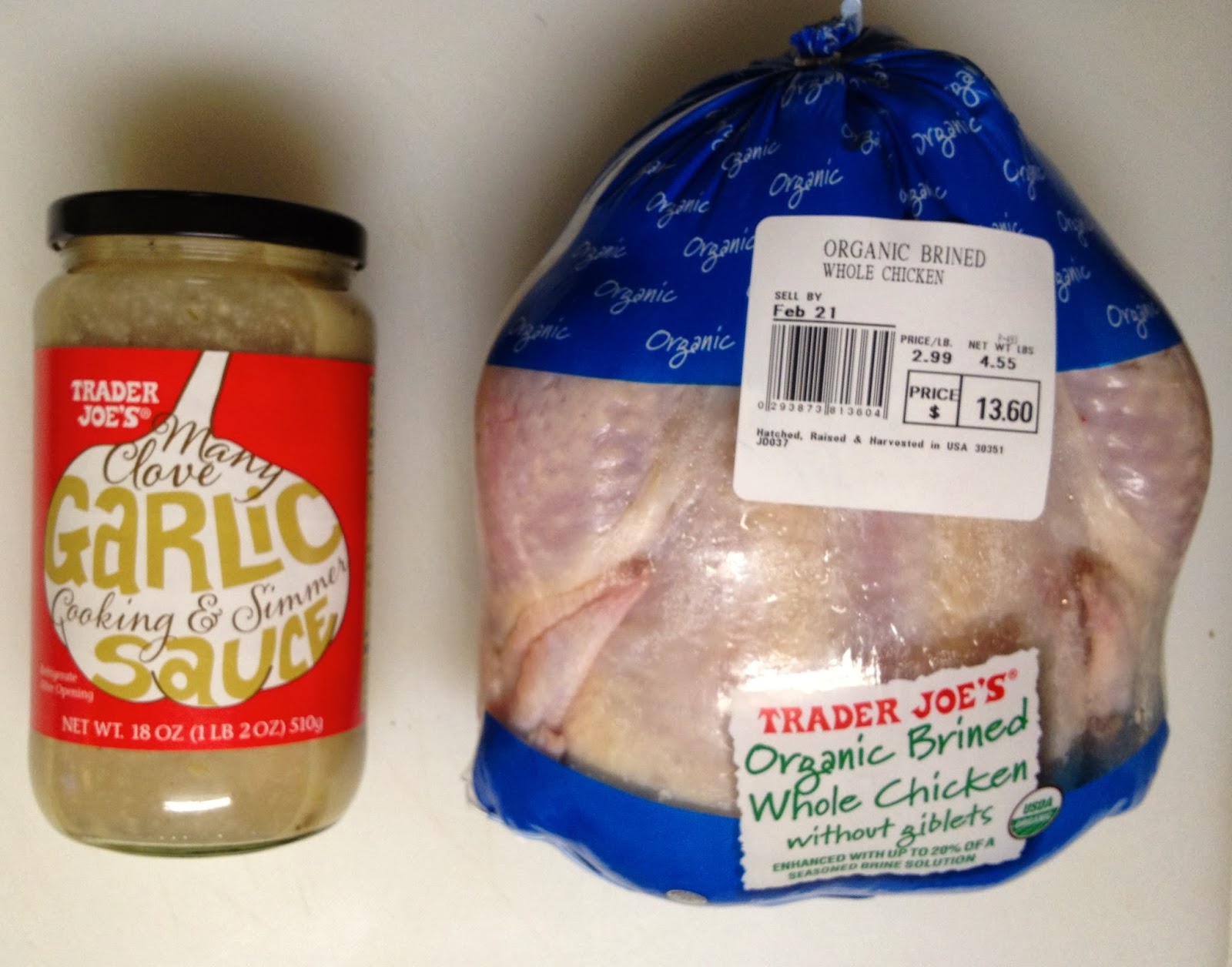 The chicken is superb—every bit as good as a Kosher Chicken which is similarly brined–but minus the blessing and much lower in price.  I followed the instructions on the Many Clove Garlic Sauce jar and using the chicken cut up into 8 pieces, I browned it thoroughly on all sides.  The chicken went into a baking dish into which the sauce had been poured. Covered, it emerged 40 minutes later perfectly cooked and delicious. 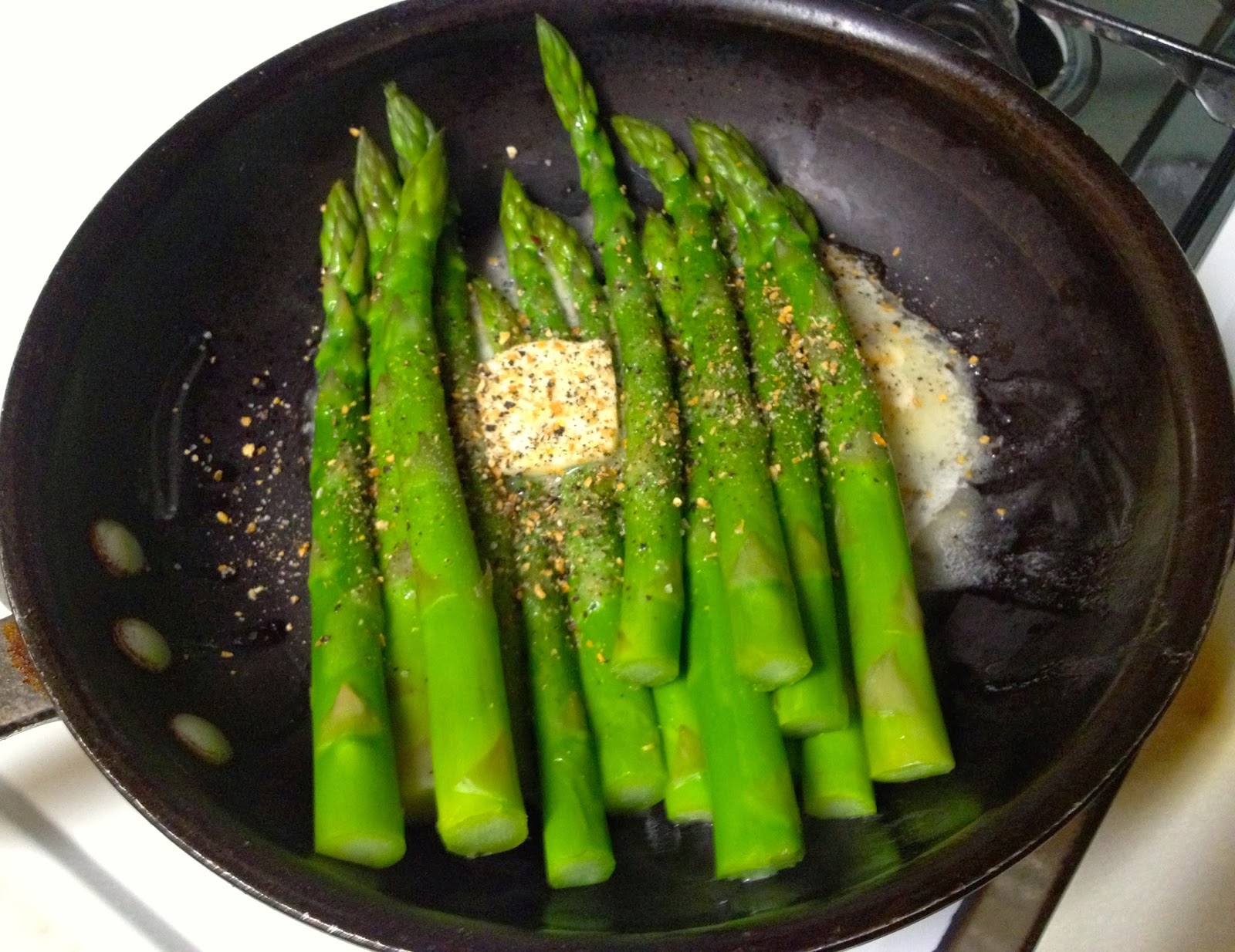 With this I served # 9. Fresh asparagus, miraculously priced at $1.99 lb. when TJ’s competition was selling it for a dollar more.  These I finished off with a knob of butter and a generous twist of Trader Joe’s Garlic Salt Grinder. Vegetables are a reason to shop TJ’s all by themselves. 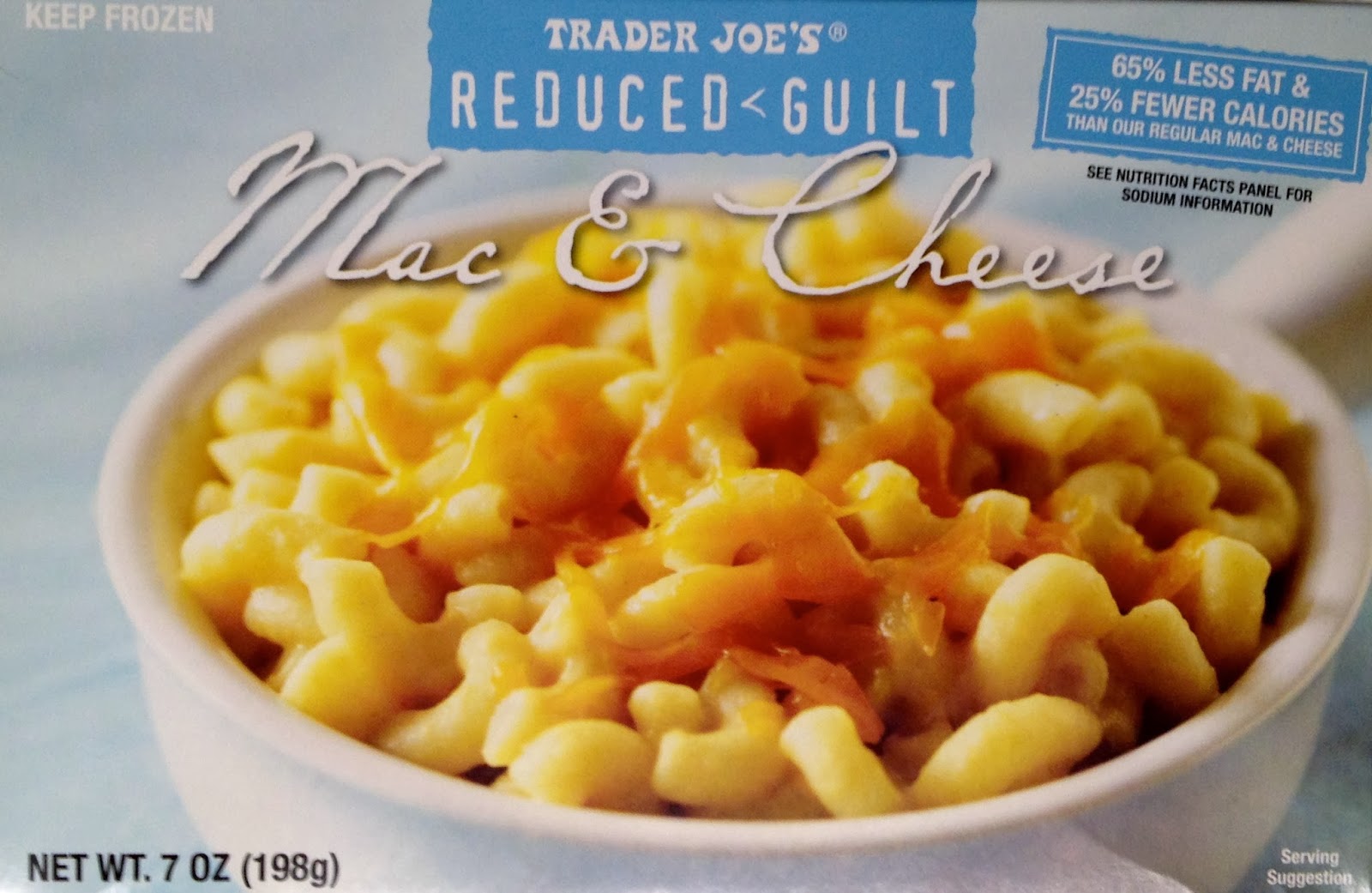 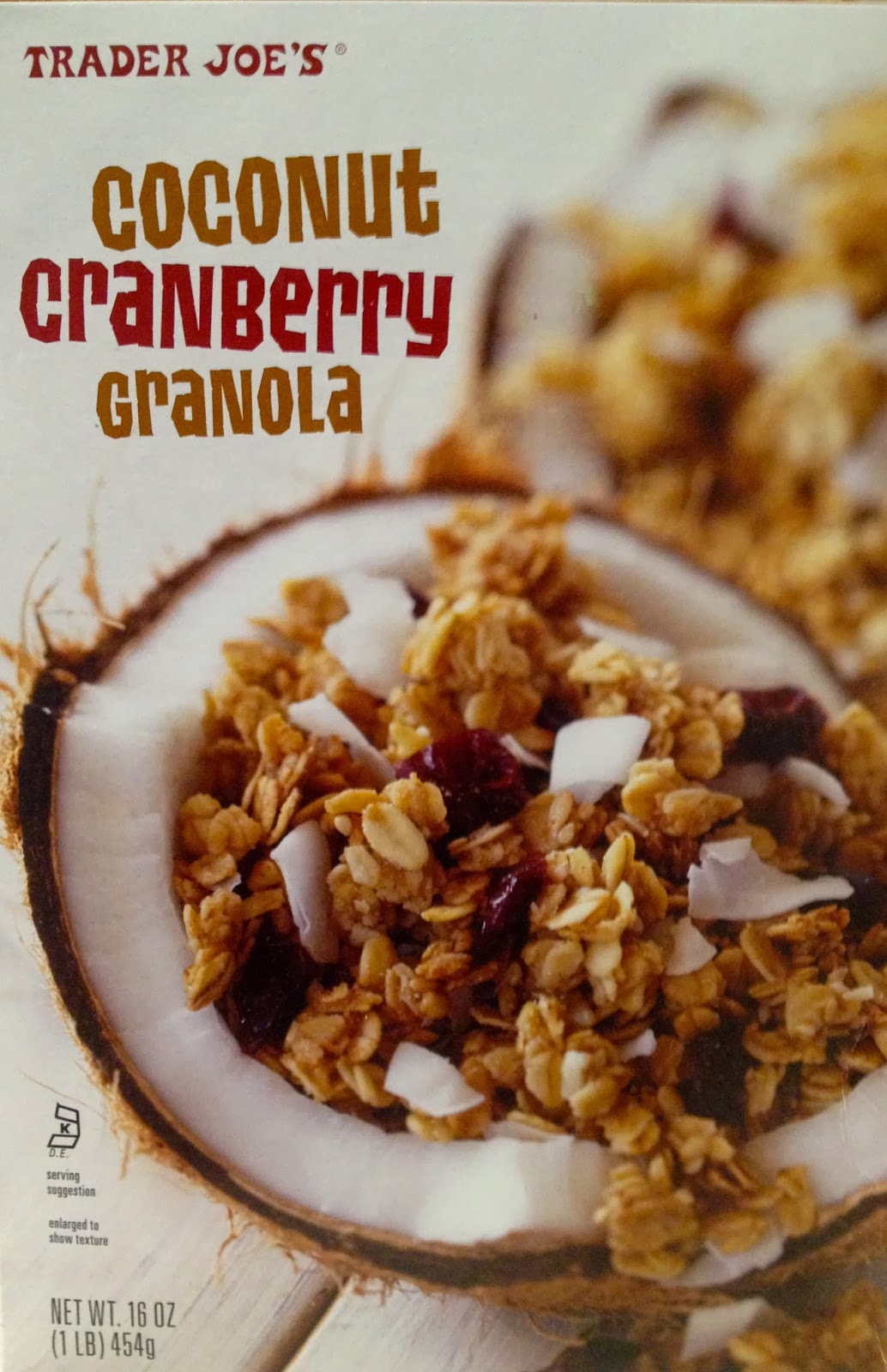 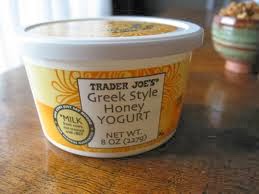 # 11. We’re not big cereal eaters but I couldn’t pass by the Coconut Cranberry Granola at $2.49 for 16 oz. This is not just a bargain but a fantastic addition to #12, their Whole Milk Greek Yogurt (1.29 for 8 oz.) which I highly recommend since Chobani has been playing the reduced-cup-size-same-price-as-before game.  The Non-Fat Greek Yogurt is the same size as Chobani (5.3 oz.), every bit as good and just .99 cents a cup. 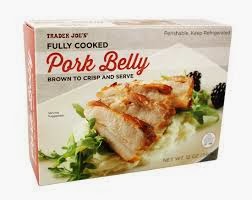 “Pork Belly is the new bacon”, The “Fearless Flyer” states, coming to the party late.  But then they admit #13. Pork Belly is bacon.  Pork Belly has risen in price with the demand for its sinfully decadent, crispy, melt-in-your mouth fatty goodness.  So TJ’s partially cooks the product and sells it in an absurdly oversized box containing a chunk of 12 oz. for $4.99.  I could have kicked myself because the price is identical to a pound of pork belly at our full-service supermarket.  But mostly because I had just made this (https://chewingthefat.us.com/2014/01/cosmo-goss-beer-braised-pork-belly-and.html) and TJ’s Pork Belly was decidedly not as good. No real flavor which mine, poached in ale, had in spades. Pass this one by and make your own.

Finally, I did an indoor Asian Barbecue with #14, TJ’s Baby Back Ribs—–not the marinated version which is pre-marinated and pre-cooked and, need I say, pre-salted.
I bought a single rack, perfect for 2 and, at $10.48, a great buy.  I cooked them using a Bobby Flay technique that uses both oven and broiler–not a grill– and produces sensational ribs in an hour and a half. Here’s the link to that  post:
https://chewingthefat.us.com/2014/02/an-asian-spiced-barbecue-in-dead-of.html 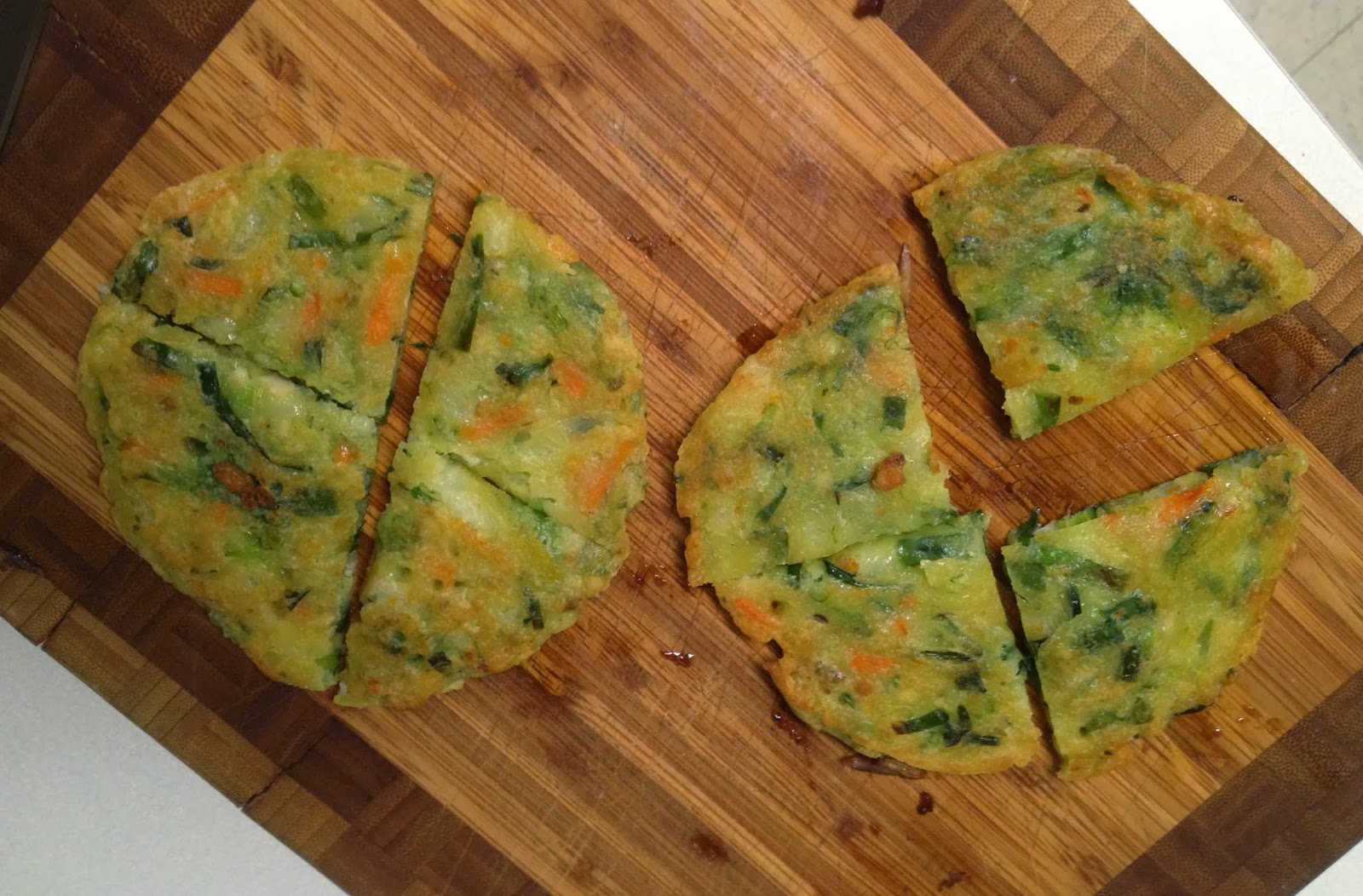 I served the ribs with #15, Trader Joe’s Scallion Pancakes.  These are one of my favorite Asian menu items.  The package of frozen ones at TJ’s are South Korean-made. They can be heated in an oven in 4 to 7 minutes which I dutifully tried.  But for total crispy brownness, I’d recommend frying them in a little oil. STOP THE PRESSES!  Last night, several days after I posted this, I did indeed fry the scallion pancakes in a little oil.  They were out of this world!  And so much better than the oven-baked ones you see here.  I can now say these WOULD make the cut at most Asian restaurants and I’d recommend giving them a go at $3.49 for 4.

4 thoughts on “Attention Trader Joe’s Shoppers: The Top 15 Items You Should and Shouldn’t Buy at TJs.”