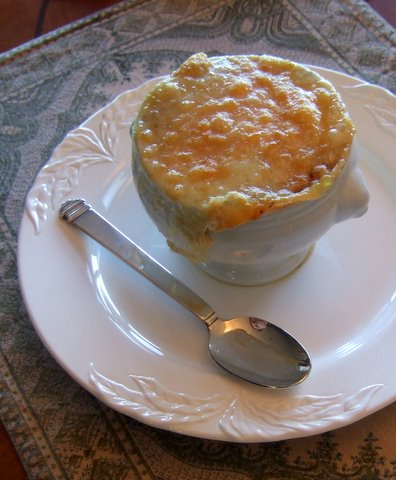 Over the holidays, when we were snowbound and had plenty of time to make lunch, I jumped at the opportunity to make French Onion Soup—or at least, some poor misguided soul’s idea of onion soup.   The recipe, clipped from a magazine I’ve since tossed, claimed you could enjoy France’s gift to soup tureens everywhere in 30 minutes.  Tasting nothing like any version of onion soup, foreign or domestic, that I’ve ever had, this flour-y insipid brew was a huge disappointment and a waste of time.  Some things should never be rushed.  French Onion Soup is one of them.
There’s a lot of lore behind the soup.  Some of it revolves around a bistro called “Au Pied de Cochon

”, which was located just outside Les Halles

, the once famous and now defunct meat and vegetable market in the center of Paris.  The restaurant served as an intersection of people going to work in the market who, in the pre-dawn hours, started their day at “Au Pied” and a posh crowd who flocked there after a late evening out.  Mingling with the butchers and market workers, the glam crowd tucked into bowls of “Soupe a l’Oignon Gratinee”.  Les Halles closed in 1974, replaced by a ugly mall.  From everything I read, the bistro’s food has gone as far downhill as the neighborhood.  Coasting on its now 35 year old reputation, “Au Pied de Cochon” is one tourist trap to avoid.  But there’s really no need to when you can make spectacular onion soup at home.
There’s surprising uniformity in recipes for French Onion Soup. The only dissent is whether to use beef or chicken stocks.  I go for beef.  I like the heartier flavor. And I believe the original “Au Pied” recipe, made so close the meat market, used beef in its stock.  However, both Larousse

, the brilliant American transplant who writes and cooks there, swears by chicken stock; vegetarians can likely use vegetable stock.  The important ingredients are the onions, the ‘croute’ and the cheese that tops it. 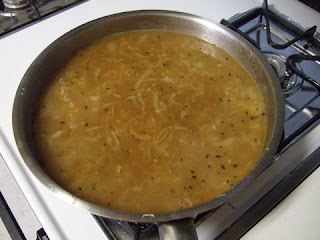 According the Larousse, the word “soupe” originally referred to the slice of bread, ‘la croute’, that was put in the bottom of bowl and the contents of the cooking pot, “la potage”, was then poured over it.  “Soupe” and “Potage” are now synonymous but, because of the presence of the bread, French Onion Soup is always referred to as “Soupe a l’oignon gratinee” 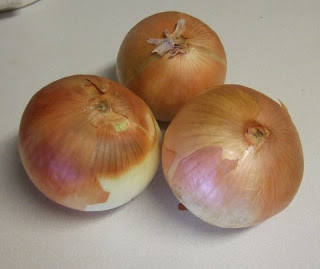 My choice of onions for this soup are the sweetest you can find: Vidalias are perfect.  When my parents lived in Atlanta, stockings-full of Vidalia onions would make their way north.  I do mean stockings-full.  My mother’s method of keeping onions was to tie them individually in old sheer nylon stockings in a kind of chain.  You’d lop one off as needed.  It worked but it was a relief to not have hose hanging in the kitchen when Vidalias finally became widely available here in New York.
The most important thing here is to cook the onions to a point at which they virtually melt and caramelize. This has to be done slowly, as slowly as possible.  Exercising great patience shouldn’t be too hard.  Aside from an occasional stir, you can pretty much leave them on low for an hour and they’ll very gradually take on a golden tone.  I’d say the whole process from slicing the onions to putting the soup on the table is a 2 hour deal.  And worth every minute.  Here’s the recipe:
Recipe for French Onion Soup “Soupe a l’oignon gratinee”
2 lbs. of sweet onions, halved lengthwise, then thinly sliced lengthwise.
3 sprigs of fresh thyme
2 bay leaves
¾ tsp. salt
4 tbsp. unsalted butter
2 tsp. flour
¾ cup of dry white wine
4 cups reduced sodium beef broth or stock
1 ½ cups water
½ tsp black pepper
4 slices of baguette, cut on the diagonal, ¾ inch thick
½ lb piece of Gruyere, Comte or Emmenthal
4 tbsp. finely grated Parmigiano-Reggianno*
Special Equipment:  Ovenproof bowls, preferably porcellaine.** 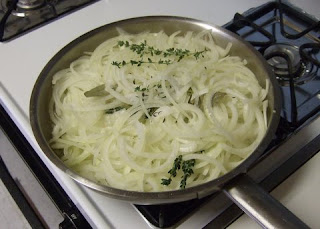 1.  Put the onions, butter, thyme, bay leaves and salt in a heavy pot.  (An enameled cast iron pot would be ideal).
Heat over a moderate to low flame, uncovered, stirring every so often until the onions are golden brown and very soft. (About 1 hour).  The thyme will have separated from the stems so fish out the thyme stems, leaving the bay leaves to be removed later. 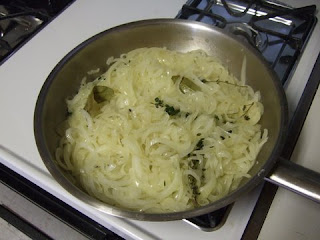 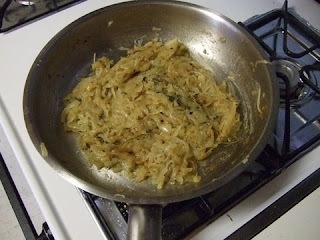 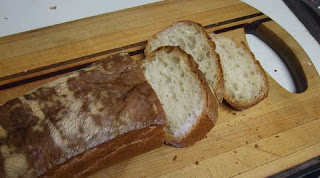 Toast the slices of baguette either in a 350 degree oven or in your toaster.  This is to dry them out a bit.  Remove them from the oven or toaster and put one in each crock or ovenproof bowl.  Put the crocks in a shallow baking pan.
4. Discard the bay leaves and divide the soup among the bowls.  Slice the cheese to cover the tops of the crocks and overhang slightly.  Sprinkle with Parmigiano and broil for 1 to 2 mins.
5. Served with a green salad, this is hearty and satisfying lunch or dinner dish.
6. This recipe can easily be doubled, the extra soup frozen to be ready in no time for unexpected guests or just a hankering for a warm bowl of soup.

** There was a period of time when I made onion soup so often, I stocked both our kitchens with individual Apilco Lion Head crocks.  They are wonderful for pot pies and get a lot more use than I imagined.
T
Author: Monte Mathews
Filed Under: Comfort Food, Inexpensive Meals, Onion Soup, Paris, France, Patricia Wells, Soup
A Quick and Easy Weeknight recipe: Orecchiette with a Veal, Caper and White Wine Sauce.
On the menu today: Chili Rubbed Flank Steaks, Duck Fat Hash Browns and Austrian White Asparagus

4 thoughts on “French Onion Soup, the ultimate slow food that can’t be rushed.”