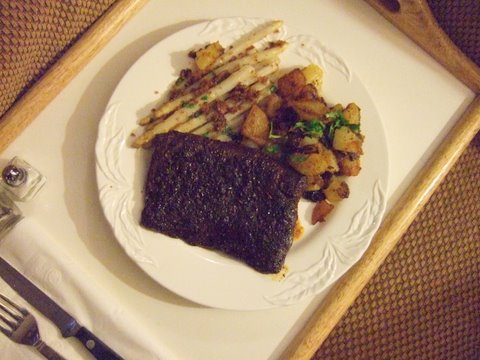 Lately, we’ve been loving flank steak.  What’s not to love about the supremely beefy flavor of this chewy cut of meat—especially when it’s one of the great bargains at the meat counter?  It’s currently less than half the price of a New York strip—but hurry, because it’s been my experience that supply and demand take over (witness the price of Osso Buco (link), it will shoot up as more people discover its versatility and flavor.  And then there’s the speed at which you can get it on the table.  It’s a perfect cut of beef for a weeknight.

Flank steak, also called skirt steak, comes from the abdomen of the cow.  One description says that if you stood the cow on its hind legs and imagined it wearing a skirt, the waist would be where you’d find the flank steak.  I love the imagery, don’t you?
In France, skirt steak is called a ‘bavette’ and it’s a dearly loved cut of meat, most often served with shallots as ‘bavette aux eshalottes’.  It is pan seared very quickly to keep it rare and therefore more tender.  I like a quick sear followed by another few minutes in a 400 degree oven.
I find flank steak’s rich meaty taste so satisfying that I can get by with a smaller portion.  That’s why I like to use a chili rub so that if I have leftovers, I can easily adapt them to go into beef tacos or enchiladas or fajitas.  But the chili rub itself adds a lot of pleasure to eating flank steak.  It boosts its flavor profile even further.
As to this admittedly odd menu, and a plate that is monochromatic in the extreme, it evolved because I had some wonderful duck fat that had appeared in our kitchen atop a holiday gift of Foie Gras

.  The duck fat was used to seal the pate. It lifted on in one piece and I saved it to make these incredibly delicious potatoes. Of course, they’re completely sinful and loaded with saturated fat.  Interestingly, Duck fat is lower in cholesterol by half that in clarified butter. And while it has 3 times more saturated fat than Olive Oil, again Duck fat has half as much as butter.  I don’t eat it everyday but it is a spectacular way to fry potatoes.  You can actually buy Duck fat

all by itself.  (Click for the link Rendered Duck Fat – 1 gallon

).
Finally, the “Austrian” white asparagus.  I’ve got my Slow Food group ready to string me up but I was in Whole Foods and the completely out-of-season green asparagus sat right next to white Asparagus from Peru, not Austria.  It was priced identically, and quite honestly, I didn’t think it was that outrageous.  So I brought some home and searched for a recipe.  To the top of my list came Wolfgang Puck 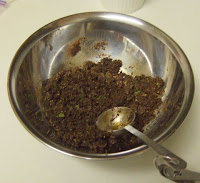 2. 2.  Combine Chili Powder, cumin, chipotle pepper, oregano, parsley and salt in a medium sized bowl.  Mix together then add the Extra Virgin Olive Oil and stirring, make it into a paste. 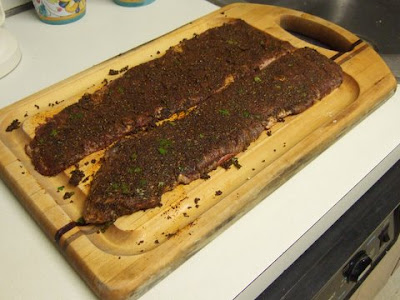 
3.  Coat both sides of the flank steak and set aside for ½ hour or more.  Meanwhile, make the Hash Browns and Austrian Asparagus.
4. 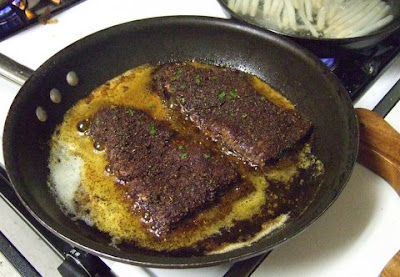 4.  In a hot cast iron skillet, sear the flank steak for 2-3 minutes. Then place the skillet in the 400 degree oven and roast for 5-6 minutes.  Remove, cover with foil and let rest 10 minutes while you finish the asparagus and hash browns.
Serves 4.  Or 2 reserving the leftover flank steak for another use.
Recipe for Duck Fat Hash Browns
½ cup Duck Fat*
2 Yukon Gold Potatoes (Allow 1 potato for each portion) cut into large dice
2 Shallots (Allow 1 shallot for each portion), peeled and sliced 1/8 inch thick.
Kosher Salt and Freshly Ground Pepper
1.   Peel and dice potatoes. Put them in a pot of boiling water and blanch them for 10 minutes. Remove pot from stove and drain potatoes.  Set aside.
2.   Slice peeled shallots 1/8  inch thick.
3.   Add duck fat to large skillet and heat until it is melted and shimmering. 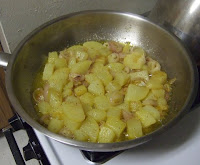 4.   Add onions and potatoes to skillet.  Over medium high heat, cook the mixture, turning it over frequently as it browns.

5.   Salt and pepper the mixture to taste. 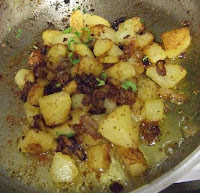 When potatoes and onions are golden brown, remove from pan and serve at once. 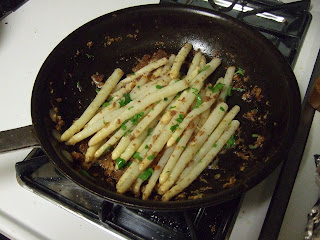