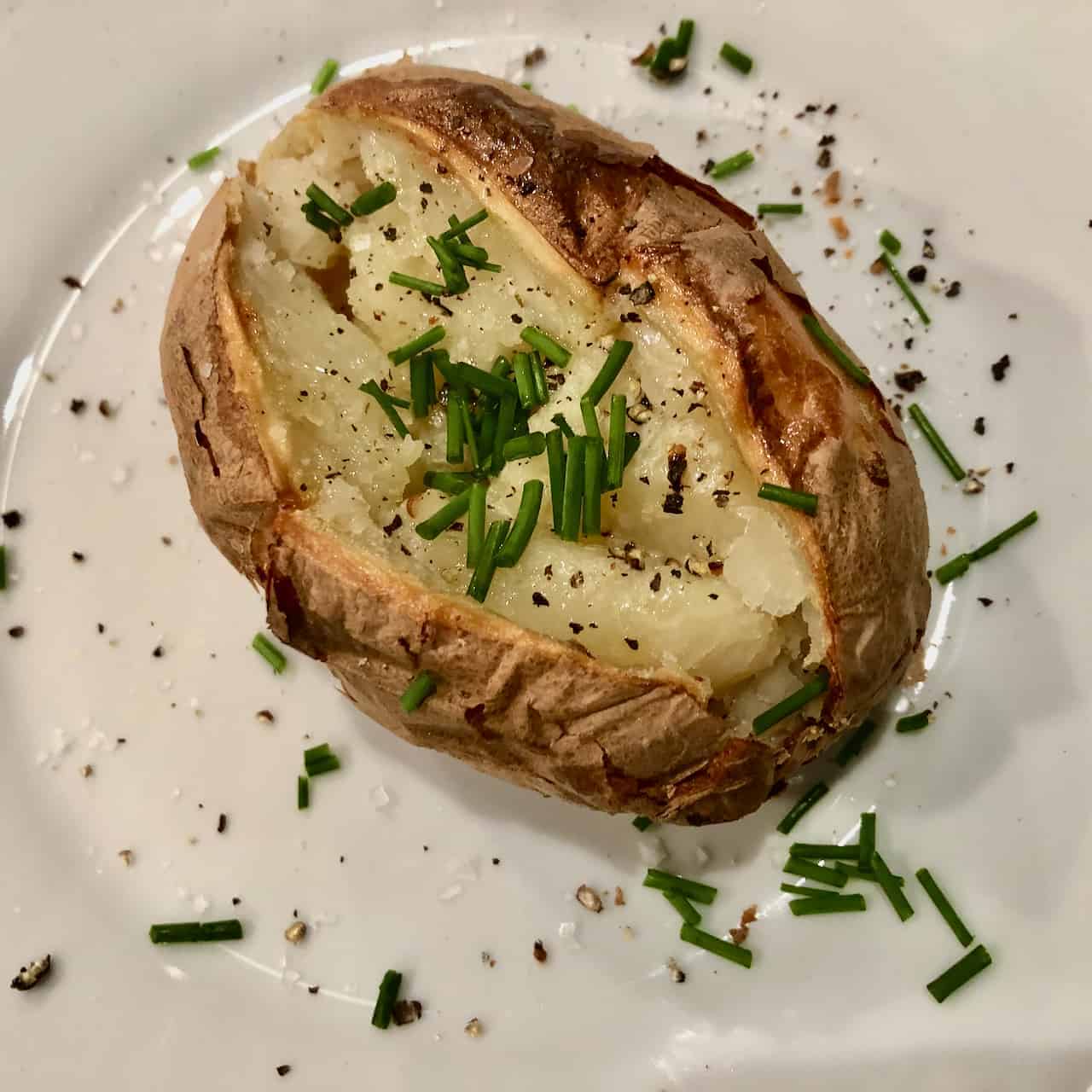 Astonishingly, Baked Potatoes are trending in the heat of Summer.

Almost every day, I check to see what’s hot on Chewing The Fat.  This week, I discovered that the most popular recipe on the entire site was “The Perfect Baked Potato”. With 4160 pageviews just last week, it beat all comers. I was astonished.  People cranking up their ovens to 450 degrees in the middle of a heatwave? I wondered if the Australian (#4) and South African (#9) subscribers were craving the comfort of a great baked potato in the dead of their winters.  But the numbers didn’t add up. The majority had to be coming from the US and Canada. When I thought about it, a great baked potato served with any grilled meat is a great side dish.  Were all those summer grillers using baked potatoes on the side?  Sounds plausible. In fact, it sounded great. So guess who cooked one using today’s recipe? And guess what?  This may just be my favorite way to cook them ever.

Crazy Crispy crunchy on the outside, fluffy as all get out on the inside, it was so good! 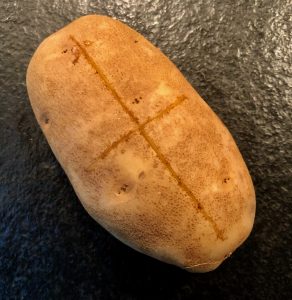 The English take on baking ‘jacket’ potatoes is quite different from anything I had ever tried before.  Instead of stabbing the potato all over this technique cuts a cross in the potato before it goes into the oven. The oven temperature is slightly lower at 400 degrees and the cooking is considerably longer—two hours!  I confess to guilt over the energy required to heat a conventional oven that high for that long.  Upon checking, it turns out a Toaster Oven uses about 1/3 to ½ the energy of an electric oven. Ours fit six Russet potatoes easily so I used that. And it’s basically a set it and forget method as long you remember to start the potatoes two hours in advance of serving.

How did the English become so expert with a South American import?

The potato was domesticated in Peru and Bolivia since at least 5000 BC. From there it spread all over the world.  It made its way to Europe arriving in Spain around 1570 and in the British Isles between 1588 and 1593. The Brits have been cooking potatoes for a very long time. Meanwhile, the French were besotted with the potato. In the 1700s, King Louis XVI promoted the new crop and Marie Antoinette, his queen, even wore a headdress of potato flowers to a fancy dress ball. And why not? As the writer of the 1785 edition of Bon Jardinier opined “There is no vegetable about which so much has been written and so much enthusiasm has been shown … The poor should be quite content with this foodstuff.” And content they were: potatoes had a low rate of spoilage, their size easily satisfied hunger and they were cheap. By the mid-19th Century, they were a major staple, especially in the British Isles. There you will find them just about everywhere from “Fish and Chips” to the most glorious baked potato I have ever tasted. Here is the recipe and below it, the recipe that attracted those 4160 pageviews last week. Plus a couple of other great potato recipes.

: However many you like...one per person
: 5 min
: If you can use a paring knife you can make these.
Print This

The crispiest, crunchiest outside with the fluffiest of interiors, these potatoes are incredibly good.