Three years ago, my friend Kimberly moved to Europe from Montclair, New Jersey. Her husband had been assigned by his American company to run their European division which has its headquarters in the third largest city in France: Lyon.  Kimberly, Peter and their two sons quickly settled into the life of the Ex-pat community there.  It’s a large one because Lyon, a city of 500,000, or 1.2 million if you count the ‘metropolitan area’, is a scientific and manufacturing center, the second largest in France.  Kimberly and I share a twenty-year history.  Much of that time, we traveled together for our jobs in Advertising.   And much of that time, we consumed some very memorable meals. So when an assignment took me to Lyon, I knew Kimberly’s restaurant list would be as good as gold. And even if Kimberly was out of town for the weekend, I’d have plenty of options to choose from before she got back.

I’d been traveling with 3 other travel journalists and our Public Relations ‘handler’, four women and me, and we’d had a truly wonderful trip.  When it was all ending in Lyon, we decided to head out to one last meal.  On Kimberly’s list there was a lone “Bouchon”.  A ‘Bouchon’ is a traditional Lyonnaise restaurant serving local specialities.  Lyon is the home of one of the fathers of ‘Nouvelle Cuisine’, Paul Bocuse.  He is venerated here for his introduction of lighter cuisine emphasizing fresh ingredients of the highest quality.  They even named their central Food Market, Les Halles de Lyon, for him.  But the Bouchons apparently ignored any lesson Bocuse tried to teach them.  In general, Bouchons specialize in massive amounts of sausage, pates, roast pork, foie gras– all quite fatty and centered largely around meat.  Having determined that there were actually a couple of items that our group vegetarian could eat, we ventured off to Bouchon Sully (20 Rue Sully, 6ieme Arr. Lyon www.lebouchonsully.com).  And we were awfully glad we did. 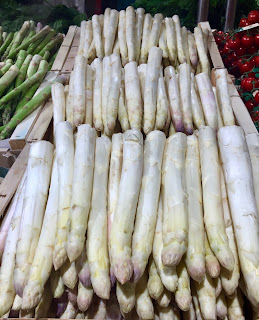 I could go on about our three course 22 Euro Prix Fixe and a wine list that included excellent bottles that were only twice the cost of wine by the glass in New York. Instead I’ll stop at the show-stopper:  The ‘specialité de la maison’ that particular week:  Asperges Blanc aux Sauce Gribiche.  There was also a slice of ham gilding this particular lily but it seemed somehow superfluous to this ravishing dish.   I should point out that I’ve been away most of May and believe me, I’d seen plenty of white asparagus.  In Germany, its fields were pointed out many times which makes sense since Germans are mad for white asparagus.   It’s the largest cultivated crop of any vegetable grown there. Called “Spargel” in German, it first appears in mid-April and the feast continues all the way through June 24th, when the spring-time vegetable disappears.   In the States, it seems slightly season-less. It’s certainly in markets like Whole Foods almost all the time, likely due to exports from Peru which run counter seasonal in the first place. 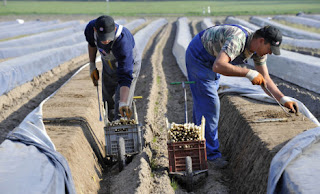 I didn’t actually see White Asparagus being grown. No greenery is allowed to show above the surface. It grows entirely underground and earth is mounded around the plants.  It’s harvested with a tool that looks like a carpenter’s gouge.  The asparagus pickers run this tool into the earth, probing for the asparagus stock then cutting it off cleanly at the bottom of the stalk.  The object is to keep the entire stalk white and tender.
At Bouchon Sully, the tender stalks were enhanced with a lovely sauce. Gribiche is similar to an aioli but more tart.  It’s filled with shallots, hard-cooked egg, salty capers and crisp cornichon pickles.   It’s a wonderful complement to the sweet tenderness of the asparagus.  Since I started researching this recipe, I’ve read that Sauce Gribiche can happily enhance meat, fish—“even potatoes”. And of course, it can be used on green asparagus too.  Some versions called for using commercial mayonnaise but for sure that wasn’t the case in Lyon.  This recipe is surprisingly easy to make.  The prep time is all of 15 minutes including the essential peeling of the white asparagus.  I’ve given it to you as written.  But I confess that I had none of the cornucopia of fresh herbs in the recipe.  I stuck with parsley alone.  And later, I read a Frenchwoman suggest doing using exactly that and nothing more.  Suit yourself.  By the way, Kimberly and I returned to Bouchon Sully for lunch three days later.  We had the Asparagus…again.
Recipe for White Asparagus with Sauce Gribiche adapted from Bouchon Sully in Lyon, France (Asperges Blancs aux Sauce Gribiche)
Prep time: 15 minutes. Total Time 30 mins ( 25 to cook the Asparagus) Serves 2. 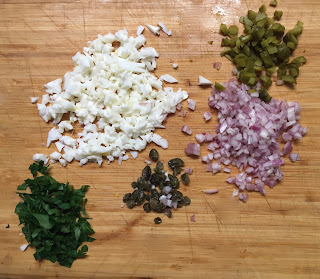 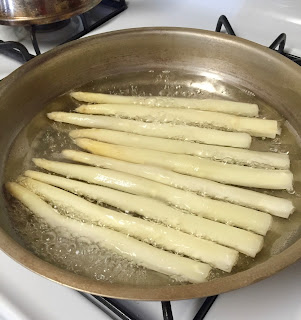 1. Bring a large sauté pan of heavily salted water to a boil; prepare an ice water bath.
Cook asparagus until crisp-tender, about 20 to 25 minutes depending on size; plunge into water bath, then pat dry with paper towels. 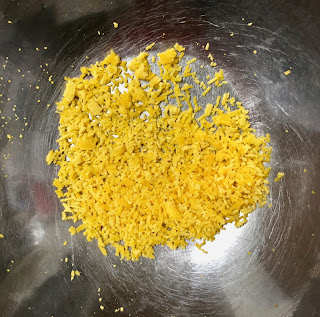 2. Coarsely chop the egg whites and set aside; push the yolks through a sieve into a medium sized bowl. 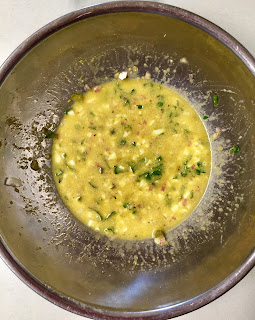